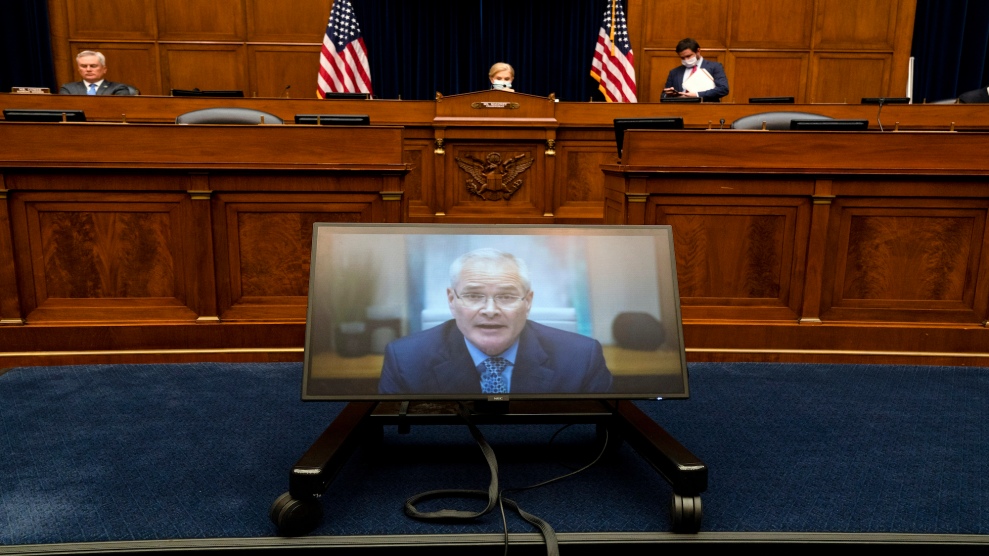 Darren Woods is CEO of ExxonMobil and he testifies via videoconference on Thursday before the House Committee on Oversight and Reform. (Jacquelyn Martin/AP)

This story was originally published in HuffPost It is reproduced here as part Climate Desk.

A landmark congressional hearing to probe the extent to which the oil industry misled the public about global climate change featured executives of some of the world’s largest fossil fuel companies and industry trade groups further downplaying climate science.

“We know the combustion of oil and gas releases greenhouse gases,” Darren Woods, CEO of oil giant ExxonMobil, told members of the House Committee on Oversight and Reform before misrepresenting the findings of the world’s leading climate science body.

“The Intergovernmental Panel on Climate Change,” he said, “has concluded that increased greenhouse gases can contribute to climate change.”

What the United Nations scientific body actually concluded in an August report is that human activity—namely the burning of fossil fuels and deforestation—is the “unequivocal”Climate change has already caused severe changes around the world.

Other industry executives also came up with similar talking points. “We accept the scientific consensus: Climate change is real and the use of fossil fuels contributes to it,” said Chevron CEO Michael Wirth.

“The climate is changing and humans are contributing to those changes,” said Suzanne Clark, CEO of the U.S. Chamber of Commerce, which has also spent years funding climate misinformation campaigns.

Fossil fuels firms aren’t just a contributor to global warming, but the primary cause.

In the 1990s, such statements could have been a hit. In 2021, it’s outright climate denial. The science is unequivocal: Fossil fuels aren’t just one of many contributors to global warming, but the primary cause of the rapidly worsening crisis.

The highly anticipated hearing marked the first time that oil industry executives have appeared before Congress to answer questions under oath about the industry’s role in spreading climate misinformation. Democrats were already comparing the moment with a 1994 hearing where executives from the largest tobacco companies testified they did not believe nicotine and cigarettes are addictive.

“Twenty-seven years ago, seven tobacco executives appeared in this room before Congress,” Rep. Carolyn B. Maloney (D-N.Y.), the chairwoman of the committee, said in her opening remarks. “Rather than admitting the truth about their product, the executives lied. This was a watershed moment in the public’s understanding of Big Tobacco. I hope that today’s hearing represents a turning point for Big Oil. I hope that today the witnesses will finally own up to the industry’s central role in this crisis and become part of the change we need.”

Despite mountains of evidence, executives flatly denied that their companies participated in any effort to downplay or dismiss climate change. “While our views on climate change have developed over time, any suggestion that Chevron has engaged in an effort to spread disinformation and mislead the public on these complex issues is simply wrong,” CEO Michael Wirth told lawmakers.

“Exxon does not, and never has, spread disinformation regarding climate change,” ExxonMobil CEO Darren Woods said.

InsideClimate News conducted a 2015 investigation and found that Exxon executives were among the most powerful in the industry. knew about the role of fossil fuels in global warmingExxon lobbied against efforts for reducing greenhouse gas emissions as early as 1977. Exxon donated millionsto groups that deny anthropogenic global warming. API includes both Chevron and It. knew about the threat in the early 1980sBut they worked to downplay and cover it up. Wirth sits on API’s board, which continues to work to block climate action.

Maloney questioned Woods about statements that former Exxon CEO Lee Raymond made in the mid-1990s, including that the “the case for so-called global warming is far from air tight.” Nearly 20 years earlier, an Exxon scientist named James Black wrote in an internal memo that “there is general scientific agreement that the most likely manner in which mankind is influencing the global climate is through carbon dioxide released from the burning of fossil fuels.”

Republican after Republican used their time Thursday to defend the oil executives.

Maloney asked Woods if Woods agreed that statements made both by Exxon executives, and its own scientists, are inconsistent. Woods said he did not agree and that Exxon’s position “has continued to evolve with the scientific community.”

Meanwhile, Republican after Republican used their allotted time on Thursday to defend the oil executives, apologizing for what they described as Democrats’ efforts to “intimidate,” “badger” and “demonize” the industry. And they argued that the committee would be better off spending its time investigating something—anything—else: inflation, rising gas prices, immigration, the Afghanistan withdrawal, the pandemic.

“It is clear that this hearing is part of a Democrat-led disinformation campaign to distract from the Biden administration’s failed policies that are hurting average Americans,” Rep. Virginia Foxx (R-N.C.) said.

As Republicans worked to shift the focus of the hearing away from big oil’s record of pollution and climate denial, Democrats dug in.

“I think one thing that often gets lost in these conversations is that some of us have to actually live the future that you all are setting on fire,” Rep. Alexandria Ocasio-Cortez (D-N.Y.) said. “By 2028, crop yields are already projected to begin to fail, with famine beginning to hit the world’s most vulnerable populations. By 2038, current U.S. drought, fire and extreme heat trends could potentially make whole regions of the United States unlivable if we continue the trends that lobbyists are trying to have us pursue.”

“We do not have the privilege or luxury of lobbyist spin,” she added.

Democratic committee members had requested that companies turn over internal documents related to the industry’s role in misleading the public. Unsatisfied with what the companies provided, Maloney announced at the end of Thursday’s that she plans to subpoena them.

“I do not take this step lightly,” Maloney said. “We are at code red for climate and I am committed to doing everything I can to help rescue this planet and save it for our children. We need to get to the bottom of the oil industry’s disinformation campaign, and with these subpoenas we will.”

The COP26 Climate Talks Open. Here’s What to Expect.