Brock University students concluded a course on climate crisis with a commitment for positive change on Earth Day Friday, April 22.

A small group of students joined their instructor, Adjunct Professor Jayson Childs and Professor and Chair Michael Pisaric for a tree planting outside the Department of Geography and Tourism Studies.

Childs claims that the idea to raise money for a tree was born out of the fact that scholars and students spend so much time using computers. 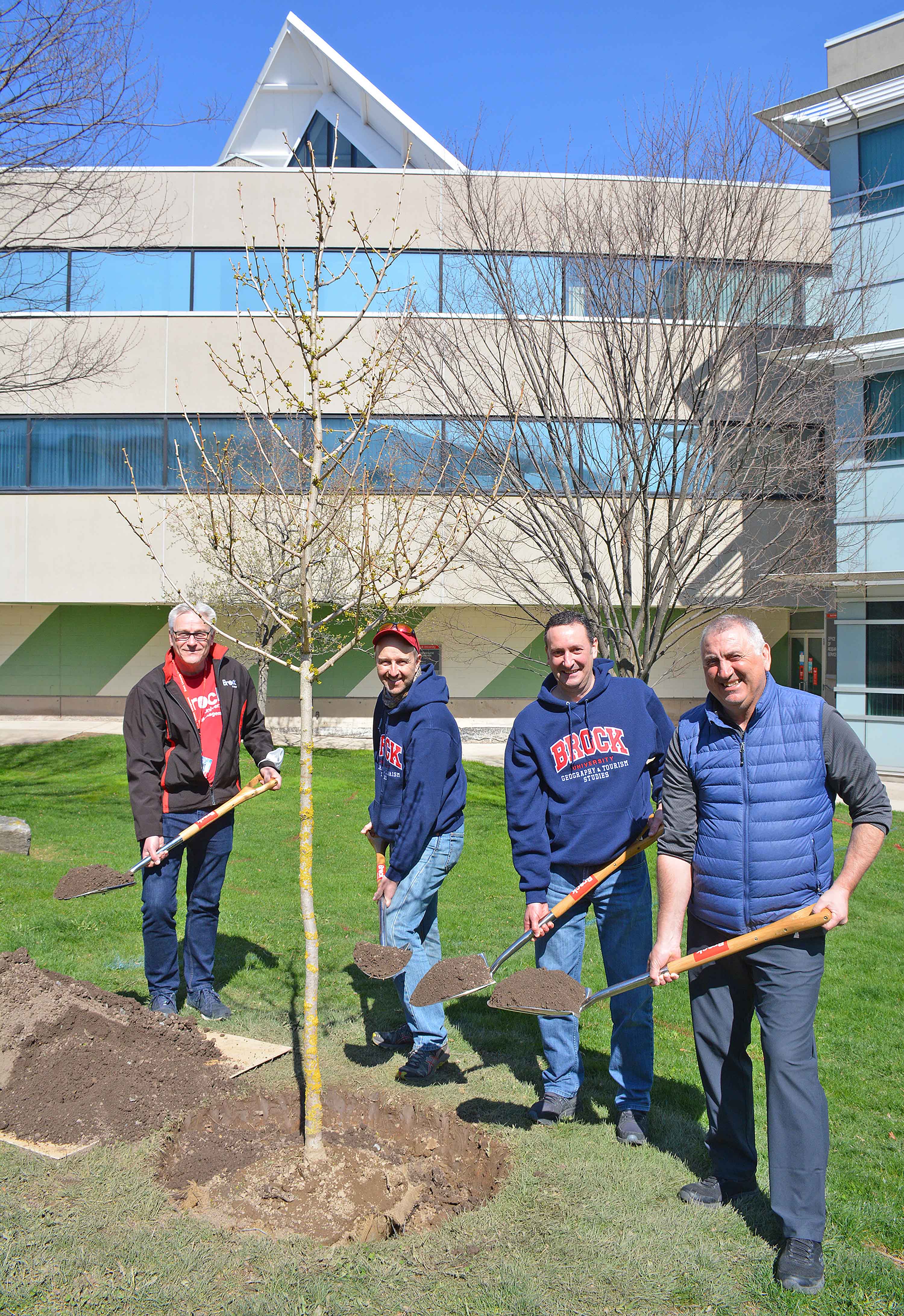 The students of GEOG 2P08, Climate Crisis, along with instructor Jayson Childs and Professor Michael Pisaric, pooled their resources to donate a new Ginkgo biloba to Brock’s campus for future generations, which was planted to celebrate Earth Day on Friday, April 22. From left: John Dick, Ground Services Manager, Childs, Pisaric and DimitreIankoulov, Department of Geography and Tourism Studies.

“I thought perhaps we could do an optional, voluntary fundraising drive to purchase a tree to plant on campus to try to mitigate some of the emissions associated with all of us sitting on our computers, while also bringing a variety of other benefits to campus,” he says.

At Pisaric’s suggestion, they selected a Ginkgo biloba tree, which is known for dropping all its leaves at once when the first frost strikes. Researchers have also planted the species on other university campuses in order to track the date of the first frost each year. This creates a unique, local data set.

John Dick, Manager, Ground Services, states that his team tries hard to keep plantings diverse, but since there are only a few Ginkgo Biloba trees on campus they were more than happy for this request.

“This was an initiative of the class, which is awesome,” Dick says. “We certainly appreciate when someone wants to add to the campus landscape.”

Childs says planting trees is one of the “simple activities anybody can do to help sequester carbon and mitigate climate change” but outlines several other benefits, too:

Juanita Lozano, second-year Concurrent Education student, says that an assignment in her first year required her to estimate the amount of trees needed to offset her carbon footprint. This got her thinking about the emission from a class of almost 500 students. After reflecting on the impact of that assignment, she decided to take part in the tree planting campaign.

“Starting local, that was the biggest take away for me,” says the Niagara-on-the-Lake resident. “It’s not really in my control to fix everything and completely stop climate change, but if I just start small, start local, it can go a long way.”

Pisaric looks forward to seeing the tree donated by this year’s Climate Crisis students thriving for decades to come.

“This initiative led by Dr. Childs provides the students in our Climate Crisis course with a practical experience directly related to the content they learned,” says Pisaric. “Using the concept of carbon offsets, he taught the students that everyday activities such as enrolling and participating in their course work can have ecological impacts, but at the same time, showed them that there are mechanisms to lessen those impacts.” 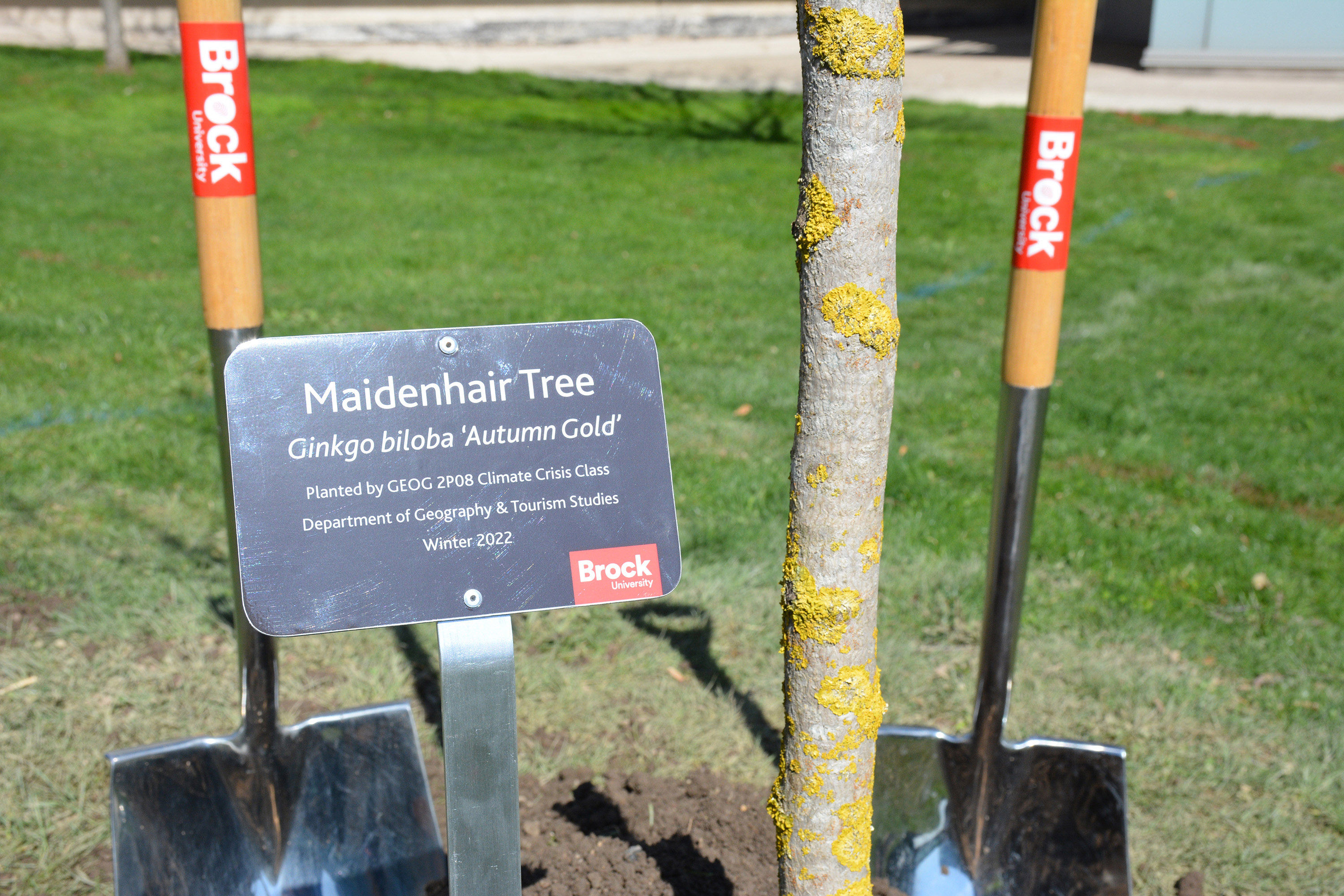