The data from the Danish Arctic monitoring service Polar Portal – which forms part of the UN weather agency WMO’s annual Climate Status report – shows that early summer was cold and wet, with unusually heavy and late snowfall in June, which delayed the onset of the melting season.

After that, however, a heatwave at the end of July, led to a considerable loss of ice.

In terms of “total mass balance” (the sum of surface melting and loss of ice chunks from icebergs, in addition to the melting of glacier “tongues” in contact with seawater), the ice sheet lost around 166 billion tonnes during the 12-month period ending in August 2021. 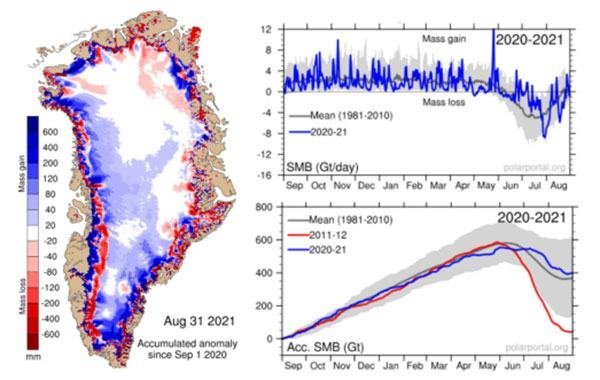 These numbers mean the ice sheet ended the season with a net surface mass balance of approximately 396 billion tonnes, making it the 28th lowest level recorded, in the 41-year time series.

This could be considered an average year, but Polar Report notes how perspectives have changed, due to rapidly advancing climate change.

These same figures would have been considered to be a year with a low total surface mass at the end 1990s.

The report also notes that the cause of the early summer chill, could be due to conditions over southwest Canada and the northwest United States.

In these territories, an enormous “blocking” high pressure system was formed, shaped like the Greek capital letter Omega (Ω). 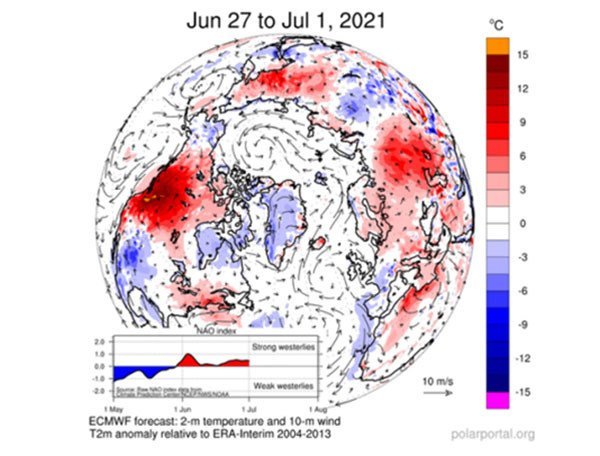 The map shows the extreme heat over North America and Greenland as well as cool, moist summer weather.

This flow pattern is found in the troposphere regularly, and not just over North America. However, it has never been seen with such force before.

According to the report, World Weather Attribution’s analysis showed that the temperature rise could only have been explained by atmospheric heating caused by human activity.

According to the report, 2021 was notable for several reasons.

It was the year in which precipitation at Summit Station, which is located at the top of the ice sheet at an altitude of 3,200 metres above sea level, was registered in the form of rain.

The year also saw an acceleration of the loss of ice at the Sermeq Kujalleq glacier, where the rate of loss had otherwise been stagnant for several years.

Winter snowfall was also close to average for the period between 1981 and 2010, which was good news, because a combination of low winter snowfall and a warm summer can result in very large losses of ice, as was the case in 2019.

How Explosives, a Robot, and a Sled Expose a “Doomsday” Glacier – Mother Jones