An effort of 15 deep-sea international expeditions has allowed the analysis of abyssal sediments collected in all major oceanic regions, including the Arctic and Southern Oceans. Credit: © Andreas Worden

The deep-ocean floor is the least explored ecosystem on the planet, despite covering more than 60% of the Earth surface. Largely unknown life in abyssal sediments, from benthic animals to microbes, helps to recycle and/or sequester the sinking (in)organic matter originating from pelagic communities that are numerically dominated by microscopic plankton. Benthic ecosystems thus underpin two major ecosystem services of planetary importance: the healthy functioning of ocean food-webs and the burial of carbon on geological timescales, both of which are critical regulators of the Earth climate.

Researchers from the Norwegian Research Centre (NORCE), Bjerknes Centre for Climate research, the University of Geneva, as well as from the CNRS/Genoscope and IFREMER in France, have massively sequenced eukaryotic 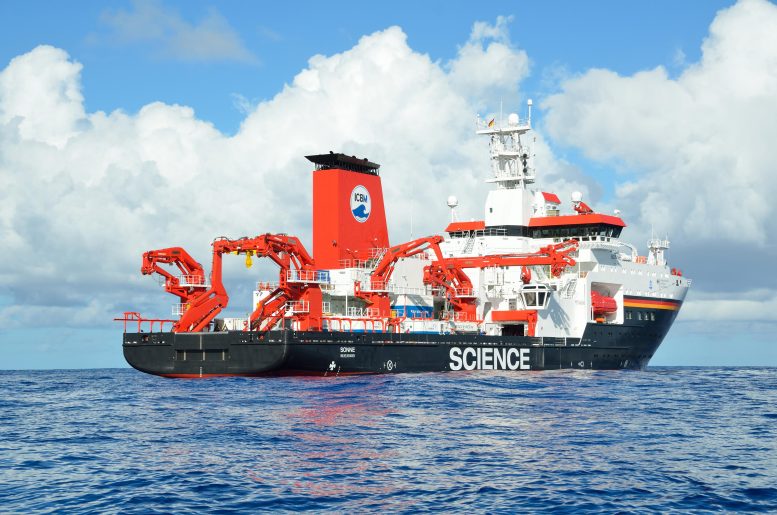 “With nearly 1700 samples and two billion DNA sequences from the surface to the deep-ocean floor worldwide, high-throughput environmental genomics vastly expands our capacity to study and understand deep-sea biodiversity, its connection to the water masses above and to the global carbon cycle,” says Tristan Cordier, Researcher at NORCE and Bjerknes Centre for Climate Research, Norway, and lead author of the study.

What lives in this dark and hostile environment?

By comparing sediment DNA sequences with the ones from pelagic realms, it was possible to distinguish indigenous benthic organisms from sinking plankton that had reached the seafloor from the overlying water column. Results indicate that this benthic biodiversity could be three times larger than in the water masses above; and this diversity is composed of very different taxonomic groups that are mostly unknown. 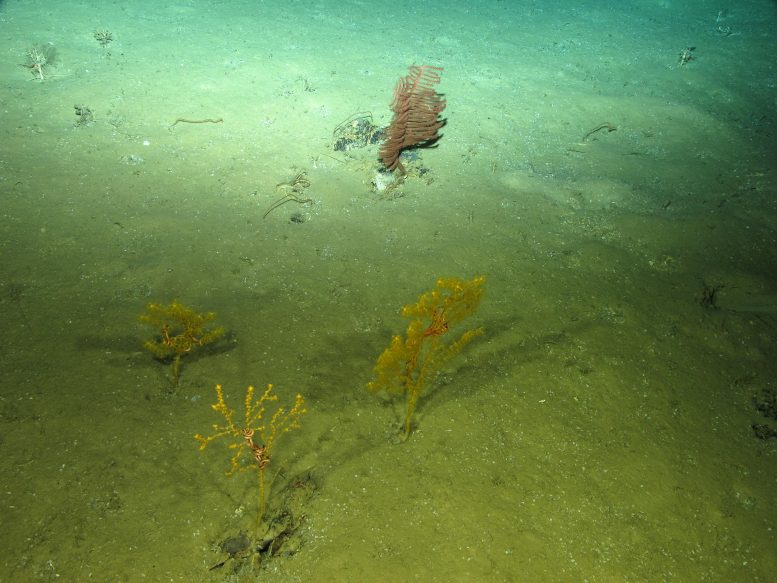 An effort of 15 deep-sea international expeditions has allowed the analysis of abyssal sediments collected in all major oceanic regions. Gorgonians and black corals at 1960 m depth in the Atlantic Ocean. Credit: © MEDWAVES/IEO/ATLAS project

“We compared our deep-sea benthic DNA sequences to all references sequences available for known eukaryotes. Our data indicates that nearly two-thirds of this benthic diversity cannot be assigned to any known group, revealing a major gap in our knowledge of marine biodiversity,” says Jan Pawlowski, Professor at the Department of Genetics and Evolution of the University of Geneva and at the Institute of Oceanology of the Polish Academy of Sciences in Sopot.

What can plankton DNA in deep-sea sediments tell us?

Analysis of the abundance and composition of plankton DNA in deep-sea sediments confirmed that polar regions are hotspots of carbon sequestration. Moreover, the composition of the plankton DNA in sediments predicts the variation of the strength of the biological pump, an ecosystem process that transfer atmospheric carbon dioxide into the deep ocean, hence regulating the global climate.

Panchkula’s MC will soon be cleared for the environment : The Tribune India

“For the first time, we can understand which members of plankton communities are contributing most to the biological pump, arguably the most fundamental ecosystem processes in the oceans,” says Colomban de Vargas, Researcher at CNRS in Roscoff, France.

How will the deep-sea be impacted by global changes?

This genomic dataset represents the first consistent snapshot of whole eukaryotic diversity in the modern ocean. It provides a unique opportunity to reconstruct ancient oceans from the DNA contained in the cumulative sediment record, to assess how climate has impacted plankton and benthic communities in the past.

“Our data will not only address global-scale questions on the biodiversity, biogeography, and connectivity of marine eukaryotes. It can also serve as a basis to reconstruct the past functioning of the biological pump from ancient sedimentary DNA archives. It would then inform on its future strength in a warmer ocean, which is key for modeling the future carbon cycle under climate change,” explains Tristan Cordier.

“Our study further demonstrates that deep-sea biodiversity research is of paramount importance. Huge numbers of unknown organisms inhabit ocean-floor sediments and must play a fundamental role in ecological and biogeochemical processes. A better knowledge of this rich diversity is crucial if we are to protect these vast, relatively pristine ecosystems from the impacts of possible future human incursions and understand the effects on it of climate change”, concludes Andrew J. Gooday, Emeritus Fellow at the National Oceanography Centre, Southampton, who was also involved in the research.