The resolution listed a number of demands to the University administration, including the investment of the “entirety of the University’s multibillion dollar endowment in funds that align with the United Nations Sustainable Development Goals” and the official declaration of a “global climate emergency.”

“The climate crisis is the biggest global emergency that we are currently facing and will continue to face,” Levitt said. “This crisis has really disparate impacts on particular communities, especially black, indiginous and people of color. Understanding that this climate crisis is linked to social justice makes it really important as an institution to act.”

The success of the coalition’s progress has rested on the observation that the Sustainability Initiatives Office takes action when students have stepped up to make things happen, Miklaucic said.

“Some of the specifics in this resolution, including changing our investments and reducing our emissions far sooner than 2050, are still not things the University has necessarily agreed to,” Miklaucic added. “We want to ensure that we are continually building momentum.”

Assuming that the resolution is passed, the ECC’s priorities would include increasing funding and seeing the University’s commitments turn into action, according to Levitt. 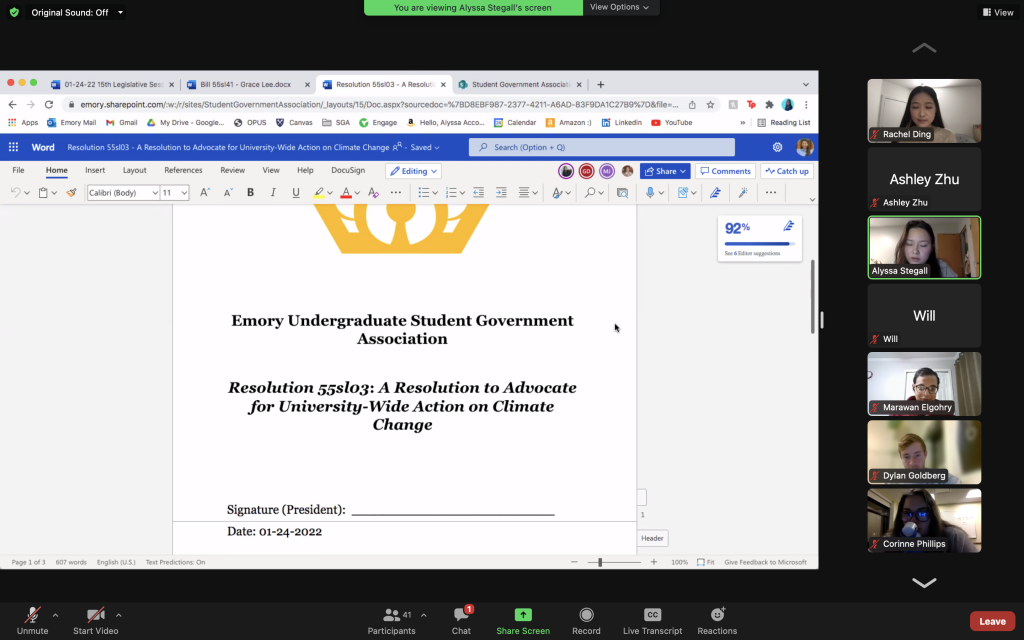 The Emory Climate Coalition made a proposal to the SGA at the first meeting of the semester on January 25, “A Resolution to Advocate for University-Wide Action on Climate Change.” (Ashley Zhu)

“As we start to schedule future meetings with important decision-makers like [Vice President of Campus Services] Robin Morey and President Fenves, having this resolution would give us the weight and backing of the entire student body to turn those commitments into tangible action,” Levitt added.

SGA President Rachel Ding (20Ox22B), however stated that the resolution was unclear and lacking in detail regarding finances and investments.

“I would love to hear more from Emory’s CIO and CFO before SGA makes a broad statement on the endowment,” Ding said. “I think we should have conversations about how the University should invest in general. The office of the CIO is in charge of the endowment, so I would be interested in talking to them first.”

Ding stated that the resolution would be more beneficial to the University administration without an endowment phrase. This phrase aims to direct all of the multibillion-dollar amount into environmental funds.

Eleanor Liu (21Ox23C), former President of Oxford SGA, also highlighted the importance for financial discussions with professionals who have dealt with money.

Other highlights of the meeting included the results from a COVID-19 study, which was sent to students during winter break. It received more than 300 responses.

“We learned a few things: mainly that the past year online was very mentally depressing and academically disengaging for students,” Ding said. “In general, we learned that students were dissatisfied, but overall there is a lot of misunderstanding and misinformation about the university’s finances.”

Aditi Vellore, SGA Executive Vice President (21Ox23C), also mentioned that there are not enough accommodations for international students or those from different time zones who are taking the same classes online as on campus.

“We are looking to address these problems with the Provost in the future,” Vellore added.

Nominating candidates face hearings on climate change, a growing concern of the Fed