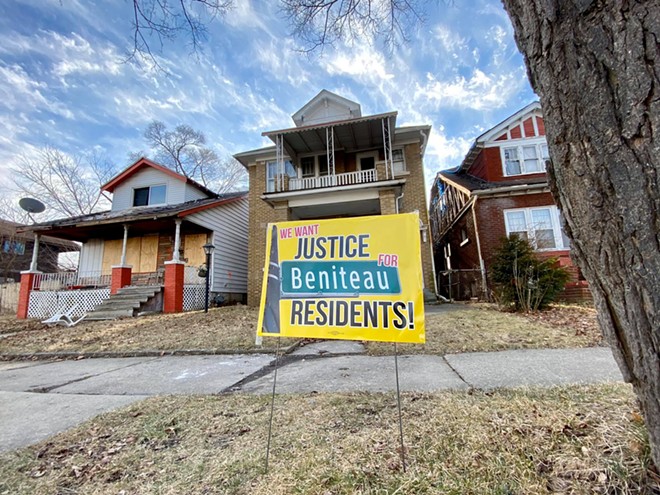 Victoria Thomas will not open her windows on hot days because orange powdery substance will cover her furniture.

Thomas experiences a burning sensation in her throat and has a persistent cough. Her sister developed rare inflammatory diseases and decided to move. Her aunt developed a chronic and painful cough. She also moved.

Thomas is one of five residents to file a civil right complaint against the state environmental regulators for allowing the plant’s toxic chemicals to increase in November. They also claim the Michigan Department of Environment, Great Lakes and Energy, (EGLE), failed to assess the cumulative effects of air pollution prior to issuing the emission permits.

The Environmental Protection Agency (EPA), in response to the complaint, is investigating whether the state’s decision to allow an increase of emissions amounts to racial disparity.

The Great Lakes Environmental Law Center filed a complaint against EGLE claiming that permits were issued in an area that is predominantly Black, lower-income, and has been subject to environmental contamination in the past.

Michigan’s Department of Environment, Great Lakes and Energy (EGLE), granted Stellantis permission to significantly expand its facilities. This continues the discriminatory tradition of requiring communities of colour to bear the disproportionate cost of industrial pollution that is generated by society, the complaint states.

Stellantis was able to increase volatile organic compounds emissions through EGLE in exchange for decreasing emissions at Warren Truck Assembly Plant in Warren. Warren is surrounded by predominantly white neighborhoods.

Near the Jeep assembly plant, the asthma rates are nearly twice that of the state average. More than two-thirds (63%) of the children in the area are poor.

The Stellantis Complex permit request was granted by EGLE in a very short time. This allowed for a significant increase in air emissions in a low income community where almost all residents within 1 mile are people who are of color. This constitutes discrimination under federal law.

EGLE stated it welcomed the review of EPAs and is ready to act.

Michigan EGLE welcomes EPAs review Michigan’s permitting decisions. This will ensure that the state is protecting vulnerable communities and that EPA provides guidance in doing so effectively, Jill A. Greenberg, EGLE spokesperson, said in a statement. Metro TimesFriday

Residents have complained that the plant emits a nauseating smell over the past year. Stellantis has been served with three air quality violations notices by EGLE. The automaker is currently working to eliminate the persistent stench.

Residents complain about adverse health effects and loud noises, including diesel engines that roar at all hours.

Varcoe: Environment minister and ‘activist’ sits down with energy leaders

Neighbors moving away are unable to sell their homes. There are still vacant properties, which are driving down property value.

Robert Shobe, one the complainants, has cancer, chronic obstructive lung disease, and suffers from frequent headaches, nausea, and coughing fits. He is so concerned about his health that he refuses to invite family and friends to visit him.

Another complainant, Akishia Hunter spent months in hotels to escape the health hazards and loud sounds. But she cannot afford it any longer. She is concerned about her severe asthma.

She stated in the complaint that you barely sleep.

EGLE is accused of contributing to the creation of a class f internally displaced persons, who were forced from their homes by discriminatory decisions made over decades that have led to this man-made crisis.