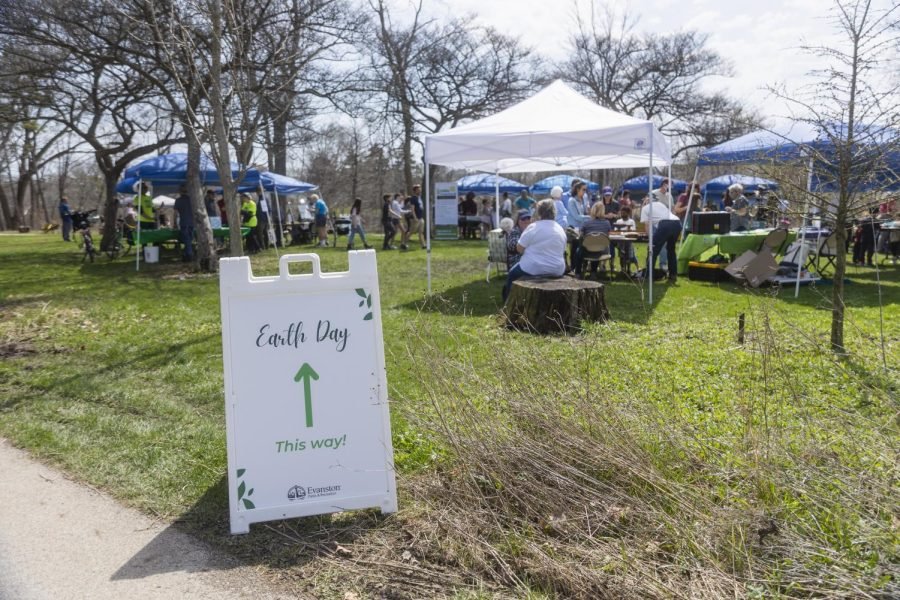 As attendees gathered outside, white booths lined grass. Visitors made art with stones and shells at one booth. Another was where they exchanged seeds and got new ones. Another group set out on a short nature walk in order to discover the surrounding trees.

On Saturday, the Evanston Ecology Center hosted the annual Earth Day Celebration. A total of fifteen local environmental advocacy and education groups erected booths with hands on activities to engage visitors and teach them about sustainability and nature.

“Our thing at the Ecology Center is to get people outside and know that they have access to the outdoors,” said Margaret Isaacson (Weinberg `15), A program coordinator at The Ecology Center. “That is the first point of appreciating nature and appreciating the earth that we live on. So if that is the takeaway for families and folks here, then I’m happy.” 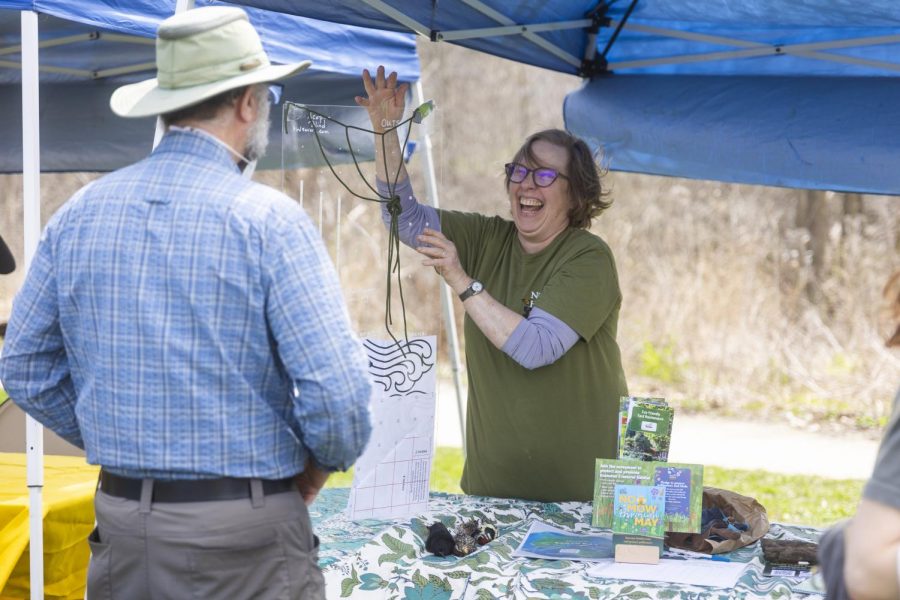 Representatives from Go Evanston spoke to attendees about bicycle safety and transportation advocacy. The organization promotes walking and biking as a healthier, more environmentally-friendly alternative to driving.

Visitors were provided with information by organizations in a variety of areas, from the political to biological. At the Citizens’ Climate Lobby’s booth, Volunteers asked people to drop a glass pebble in jars to show their concern about the climate crisis.

CCL volunteer Catherine Lott said that she wanted participants to lobby for legislation. The group supports the federal Energy Innovation and Carbon Dividend Act, which was introduced in the U.S. House of Representatives April 2021 and would impose a fee on fuel’s carbon content.

Many residents brought their children along to the event. Evanston Public Library staff exhibited some books at one table. Nominated for the first annual Blueberry Awards, EPL’s new program honoring children’s books that foster relationships with the environment.

EPL also had an ephemeral station where people could arrange seeds and beans in patterns, before photographing them.

Martha Meyer, a library assistant who founded the Blueberry Committee said that this event was the first time that she had run the ephemeral program since the pandemic. She invited children to participate in the art-arranging process throughout the event.

“(The kids) become very quiet and still and focused,” Meyer said. “And that’s how you know that they’re really involved.”

Ashvin Veligandla, a resident of Evanston and an event attendee, said that attending the celebration gave him the chance to introduce his 6-year-old daughter environmental work. Veligandla is a volunteer for Citizens’ Greener Evanston and Natural Habitat Evanston.

“I’m learning specifically about what we can do locally, which is kind of lost on people because they think ‘Well, this is a faraway thing. I can’t do anything on my own,’” Veligandla said. “But there are actually certain things you can do locally within your community.”

Cherie Fisher, a volunteer social scientist for the U.S. Forest Service is located to the side of Ecology Center building. led nature walks. She told children about beech trees and how foresters measure them.

Fisher stated that one 11-year-old was particularly enthusiastic about the walk.

“I have a special tape that foresters used to measure the size of a tree,” Fisher said. “And she just wanted to take it and measure all the trees and see which ones were the biggest.”

The Ecology Center’s booth invited visitors to scoop soil and wildflower seeds into peat pots, which can be buried directly in the ground. A nearby table had seed bombs, which were available for anyone to take. Edible Evanston offered a seed swap, which Michael Ogburn, a volunteer, said he hoped would encourage more people to plant diverse species.

“It can really diversify all the plants that we have in this area,” Ogburn said. “It will inspire (people) to get more gardening, to grow more food for themselves.”

Capital Gazette – We are currently out of stock in your area

Julia Bunn, vice president of EEA said that she wanted to encourage people in Evanston to be new leaders in the natural environment.

“We want to see people come alive to the aliveness of the world,” Bunn said.

— ‘A reunion of the environmental community:’ Evanston celebrates Earth Month this April

Clemson Architecture students continue to carry on the legacy of AIA Awards for Environment-Friendly Design.

Nanostate: nanoparticles are tiny, but they are everywhere. Pollution | Pollution