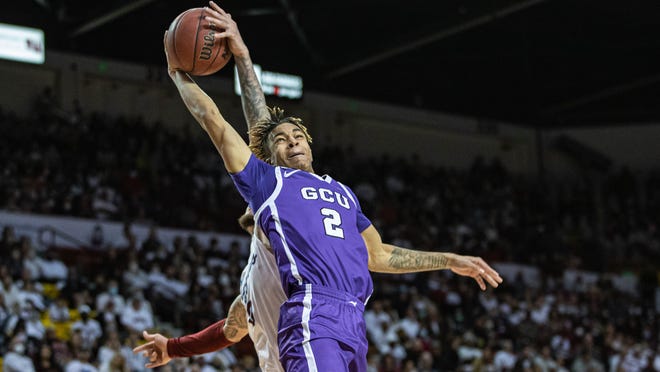 LAS CRUCES The Pan American Center is usually quiet after New Mexico State has made a mistake. This was the case when Donnie Tillman (senior Aggie forward) turned the ball over in the first quarter of Saturday’s game between NMSU Grand Canyon.

But this time, the waning groans and decrescendos from a crowd of more than 12,000Aggie fans were instantaneouslyreplaced by chants of “Let’s go Lopes!” GCU brought the ball across the halfcourt.

Although it wasn’t enough for the Lopes to have the homecourt advantage they enjoy at GCU arena, it was enough for Aggie players and NMSU’s student section to notice the difference.

Twelve thousand three hundred seven fans, including a full NMSU student sections, packed the Pan Am to witness the Aggies’ 71-6 win over GrandCanyon in their first meeting in Las Cruces since February 2020. There were also at least 250 GCU students who wanted to make their presence known in a crucial conference battle. Students from Aggies brought signs that included jeers directed at students from GCU and posters simply declaring the series was “Not a rivalry.”

“(The crowd was) charged. Chris Jans, NMSU head coach, stated that the video and the starting lineups were raucous. “We could hear their fans for a while there. They travel very well, and our children normally do well in those kinds of environments.

The Lopes’ turnover was used by Tillman to ignite a quick 4-0 run that tied the game at 23 with just 6:24 remaining in the first half. Aggie fans remained calm in the face of the storm. Redshirt sophomore forward Will McNair, a one-handed slam, was the catalyst for the Aggie fans to rally around the team.

Both fanbases were raucous long before the tip.

NMSU’s student section was almost full an hour before the national anthem played. Lopes fans began to line up as soon as the doors opened. GCU students cheered NMSU players as they went through their pregame warmups. NMSU student cheered the players out of the tunnel.

However, as passionate as the Lopes’ section may have been, they were drowned out in the cheers of the Aggie fans. NMSU held a 33-27 halftime advantage. GCU was 29% behind, while the Aggies shot 52% from their floor. However, eight Aggie turnovers and 5-12 free throws in the first half kept GCU within striking distance.

GCU’s fans were hushed by NMSU’s fans during the first half. This limited the Aggies’ opportunities to move momentum away from their 4-0 run sparked in part by Tillman’s turnover. GCU’s fans were able to speak out after the Lopes began a second-half run thanks to NMSU’s season-worst free throw shooting performance.

GCU used three consecutive 3-pointers punctuated with an ankle-breaker to take their first lead after the opening seconds of the under-12 media timeout. This allowed them to hushe thousands of Aggie fans at the Pan Am and reenergize the Lopes crowd.

Johnny McCants, a senior redshirt at NMSU, said that the (GCU student section) always brings their own crowd, their energy.” “It’s great that they bring that atmosphere down here so that we can get inspired by them.”

Jans was given a technical foul just minutes later after he argued with an official about Clayton Henry, redshirt senior guard, being called for a foul on a GCU 3-point shot. The Lopes made all five of their free throws to lead by six points with 10:24 remaining.

GCU’s fans had reclaimed momentum for their team in a noticeable manner. NMSU could hear Lopes fans at free-throw line where they shot a season-worst of 23-41. Jans created a lobdunk play to help McCants spark a 17-4 run. It included six consecutive shots from the Aggies and brought his own crowd back to the contest.

With momentum shifting and the GCU crowd almost out of it, the Aggies took a 65 to 55 lead in the final 3 minutes to give NMSU total control. The Aggie student section let its chants of “Start he bus” rain down upon the GCU fans, who were becoming increasingly quiet.

Allen and Rice finished with 28 and 18 points, respectively, based on a combined 13-22 shooting. Allen didn’t attempt a 3 pointer in a game this season, but he made all 12 of his free-throw attempts. Rice shot 6-8 from that line.

The Aggies shot 5-21 from each stripe.

Jans on NMSU’s performance:“If we look at the stats and go right to free shots, we’re currently 23-41. This includes Teddy (Allen) going 12-12. You can also see that the 3-point shooting percentage is 2-11. This team is unlikely to win as many of the games as the other. It’s something we always talk about. Even on the road, the ball might not go in the basket. You have to rebound and defend the ball and keep that with you at all costs. Tonight was a great example of how to focus on this and get through any offensive struggles.

McCants on persevering for a win“We have a lot of dudes. I mean, there are a lot of guys that love to win. You can see that we’ve only been together for nine months and have a strong bond. When you build a team that bonds like a family, you’re gonna fight together, even if you get hurt, regardless of whether you’re playing or not. But we have a bunch that loves to fight. That’s how we are, we’re gonna fight for every possession.

NMSU is in Las Cruces on Thursday, when it welcomes California Baptist at 7.

Stephen Wagner is a sports reporter at the Las Cruces Sun-News. You can find him on Twitter at @stephenwag22 andreached at SWagner@lcsun-news.com.

Just like in the past: MSU basketball celebrates the return to hostile home environments