The authorities of the municipalities are clearing out districts and squatter colonies where they believe substandard infrastructures, criminality, and diseases are ruining the lives half a billion people.

The central government has always paid attention to Saudi cities and invested generously. This is evident in the provision a well-maintained infrastructure and impressive skylines. 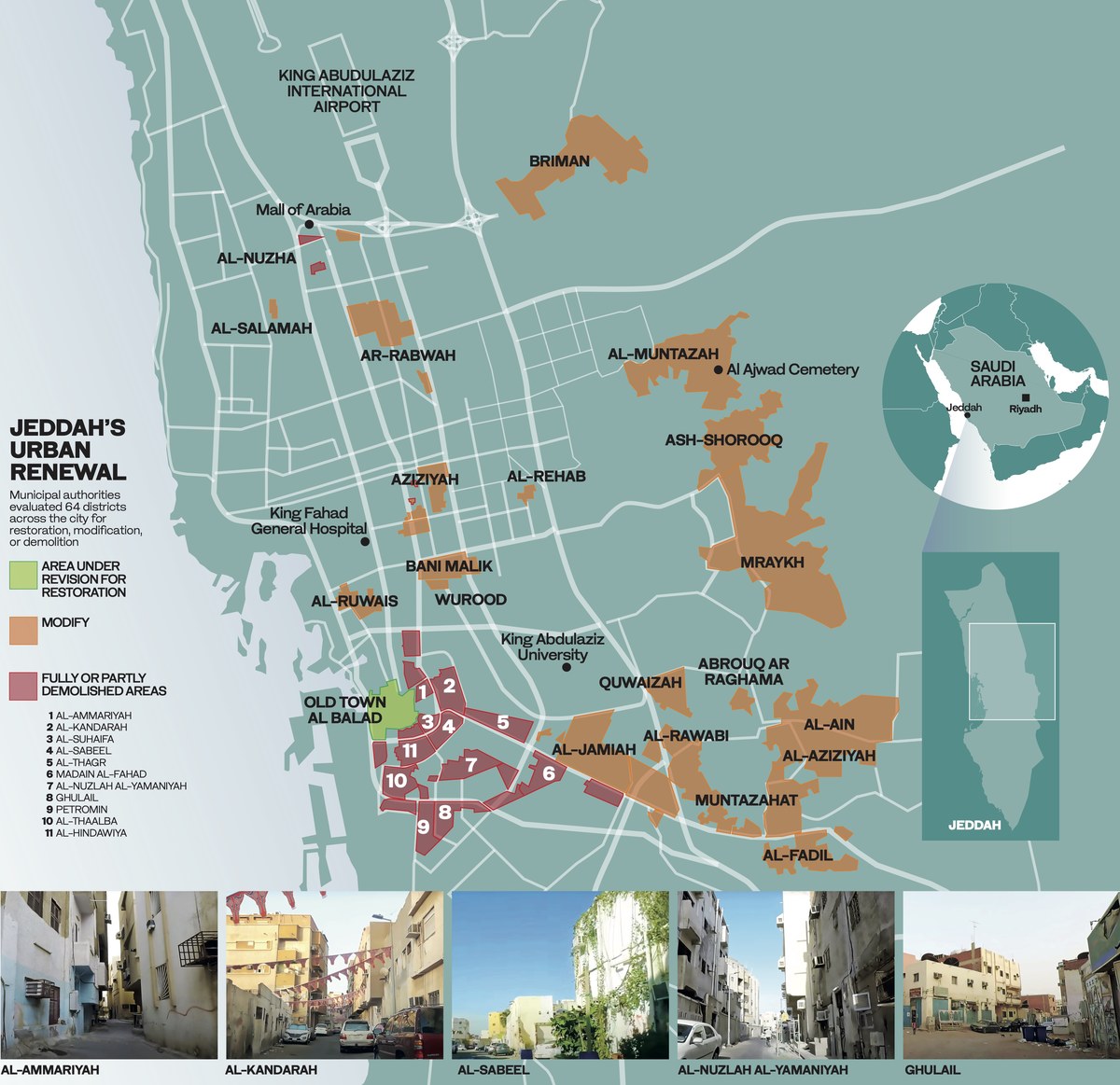 However, investment must keep up with the rapid growth of urban populations. According to the Kingdoms Ministry of Municipal and Rural Affairs 82.1 percent of the Kingdom’s total population lives in urban areas.

This trend is part a global phenomenon that is driven by a variety of economic and environmental factors. UN-Habitat predicts that around 60% of the world’s population will live in cities by 2030.

Current trends suggest that 3 billion more people will live in cities by 2050, bringing the urban share to 2/3 of the world’s population. 90% of this urban growth will likely occur in low- or middle-income countries.

This has resulted in the rapid growth of densely populated urban districts that are poorly planned and have overwhelmed the local infrastructure. Saleh Al-Turki (mayor of Jeddah) stated that there were mistakes made and that they were ignored. This led to corruption.

According to a October 2017 paper by Dr. Hisham Morada, a professor of architectural design at King Abdulaziz University Jeddah’s College of Environmental Design, the rapid growth of the city’s inhabitants began in the 1970s with the Kingdom’s oil boom.

The paper, Analytical conceptions of slums in Jeddah (Saudi Arabia), traces the growth and destruction of the old city walls, which led to Al-Suhaifa and Al-Hindawiya being created.

The report said that the areas became extensions of old Jeddah, slums, and were built using poor construction techniques and materials without planning.

Other factors that contributed to Jeddahs slum growth include a lack in state funding, a significant rise in property prices against falling incomes and mass migration, which caused the city’s population to soar to 1,000,000 people by 1978, 53 percent of whom were from abroad.

Four decades later, Jeddah’s population has risen to approximately 4 million. The old slums that grew around the city’s south and center have now expanded northwards.

The municipality decided to address the problem by announcing plans to demolish 64 districts in the city. This included several areas that were associated with high criminality and where illegal immigrants had gathered to live in densely populated areas.

To date, 26 districts have been demolished by the Jeddah Governorates Undeveloped neighborhoods Committee. They cover an area of 18.5 millions square meters.

Eight of these areas are within the King Abdulaziz Endowment Al-Ain Al-Aziziyah. This charitable project was established in 1948 to transport water into the city.

Officials at the municipal government say that demolition work will be complete by mid-November.

According to Jeddah mayor Al-Turki, the conditions in these areas are not favorable. It lacks security, no blueprints exist, and its infrastructure is almost non-existent. It is a haven for crime. These are all facts.

Al-Turki stated that residents who have title deeds to their property are eligible for free housing and compensation. More than 550 families have been relocated to date. There are 4,781 housing units that will be allocated by the end.

The poor road access and fire risk created by dense buildings are two of the primary motivations for the municipality to clear these districts.

Because of the tight spaces, vehicles cannot enter. Fire trucks and ambulances can’t even get in. Al-Turki stated that today, the main concern for civil defence in Jeddah are the slums. It is difficult to escape any fire that erupts.

Another motivation was to stop criminal activity. Maj. Gen. Saleh Al-Jabri from Makkah Region Police stated in the same TV interview that the slums were a haven of human trafficking and a source for crime.

Al-Jabri claimed that drug dealers as well as human trafficking syndicates operate under the radar in the labyrinthine neighborhoods. Crystal meth, which is a highly addictive drug locally known as Al-Shbo in the slums, is the most popular narcotic.

Al-Jabri stated that authorities were able to seize SR60million ($15.9mn) in cash, and more than 100kgs of gold worth SR50million ($13.3m), ready for smuggling out the Kingdom.

Slums can be very harmful to natural ecosystems and increase the transmission of vector-borne, airborne and waterborne diseases. Today, the cost of dengue fever, a vector-borne illness that is common in Jeddah costs the municipality SR150 millions ($40 million) annually.

The COVID-19 pandemic highlighted the issue further. This necessitated social isolation and self-distancing for those infected, which are nearly impossible to implement within overcrowded settlements.

Despite its obvious benefits, slum clearing can have negative social consequences. These informal settlements have been home for thousands of people for many generations. They have helped to establish close-knit social networks and friendships with their neighbors that are difficult to replace.

These communities are considered to be substandard housing, but they can also be used as a starting point for many newcomers to the Kingdom and people migrating from the country.

The slum dwellers are close and have strong ties. People have changed and it is not the same as before when they would call one another or visit them. These slums have become more of a convenience than a place to live.

However, the socially damaging effects of criminality in the slums have left authorities with no choice but to rebuild them. Al-Qattan stated that they pose a danger to society both inside and outside.

While crime will never stop, it is vital to curb them by removing the cancer that puts pressure on governments and communities.

These are ticking time bombs. They are a time bomb that must be removed as soon as possible.

The desire to improve the quality and life in the Kingdom’s cities and transform them into vibrant economic hubs that appeal to tourists and investors is the driving force behind the decision to clear these areas. It is also motivated by environmental issues and the desire to achieve greater sustainability.

Al-Turki claims that although the first studies of the condition of slums in the city and their impact on its development were conducted in 1972, plans to deal with them were repeatedly rescheduled in favor of less disruptive measures to improve the infrastructure.

Thanks to the commitment of the Saudi government to improving the quality of life in the Kingdom under the Vision 2030 economic and social reform agenda, urban redevelopment is now on track and much more ambitious.

Vision 2030 put pressure on the Ministry of Municipal, Rural Affairs and Housing, Al-Turki stated. This was to raise the quality of life and increase green space.

A green Riyadh is a green Jeddah and a middle east that is green. All of this would not be possible in a city with poor infrastructure.

Dal News: Creating an environment that encourages research to flourish –