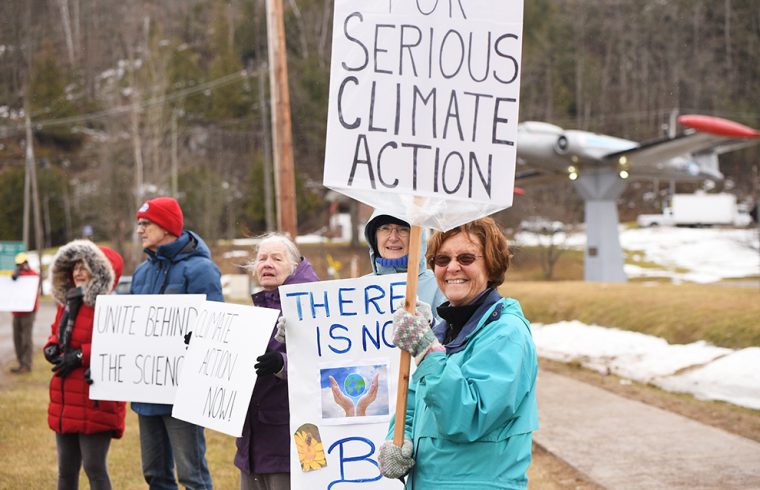 Cool winds and falling snow did not dampen the passion of protesters who gathered at Haliburton’s locomotive landmark last Friday to protest against inaction by world leaders and policymakers to address climate change and prioritize #peoplenotprofits.
This protest was organized locally by Environment Haliburton! (EH!) (EH!)
This group is interested in finding a solution to climate change. However, they are also concerned about protecting species and biodiversity, stopping the colonization of Indigenous, ancestral lands and selling them to drilling and mining companies for extraction of fossil fuels. They also want to restore land and funds for Indigenous peoples, increase funding for adaptation and decrease CO2 emissions.

EH! Terry Moore, vice-president, stated that the protest at Haliburton was meant to raise awareness about the climate crisis.
“Well, I think that it’s really important that every community tries to stand up and support Friday’s for Future. This is a global issue. We all need to work together to solve this problem. So, it’s really important for us to be out here today,” he said.
Moore stated that he is also a Seniors for Climate Action Now member, which is an organization to show intergenerational support for those who will inherit the Earth. Moore was born in 1949 and feels a sense of guilt and obligation to help the next generation in repairing the damage from the damaging actions of his era. This is related to the environmental issues that have left the atmosphere in a compromised state.
“As a generation, my generation is leaving a huge mess that future generations are going to have to … take the lion share of the responsibility … when the stuff hits the fan is going to be dying. Not mine,” he said, referring to rising emissions.
“I feel a responsibility for that. I got grandchildren. I got children and I don’t want to pass on a legacy for them that’s going to be poisoned,” he said.

According to the grandfather, his awareness for action began in the 1970s while he was at university. This coincided with the beginning of the environmental movement.
Close to two dozen protesters showed up, but to those that attended the hour long protest said it’s not about the numbers, as it is to keep the momentum going to keep the climate crisis in the public.
“Anybody showing up is good for me. It’s not about total numbers. It’s about, really, can we build community support? Yeah, I think there’s a whole bunch of people in this community who would really want to see robust climate action and are pissed off that its not happening,” Moore said.
He also said that polls suggest that more Canadians want to see climate change action.

Greg Roe of CCHC shared the same perspective as Moore related to feeling a need to do something, which started during the 1970s when he recognized the climate was changing, but added, “Why are we here locally? I keep asking myself. And, I think there’s an adage that people need to hear or see things three times before it even registers. [They think]Perhaps that is true. Maybe there’s something I should do[about climate change].”
He stated that there is one thing people can do for their cars: not to let them idle.
“A simple thing like that. Shut off your vehicle and you’re helping to support the planet,” he said.
Roe says he is more purposeful in his trips to town and thinks of ways to make a trip more enjoyable so he takes fewer trips.
Moore stated that the public has the opportunity to make sure the climate change crisis is addressed in the upcoming elections.
“We got an election coming up in June 2. We got a government that’s nowhere on climate, less than nowhere, and, so, we got to deliver a message to our political leaders that we want to see real concrete action, not bogus climate plans, but real climate actions. We had a chance to speak out on June 2.