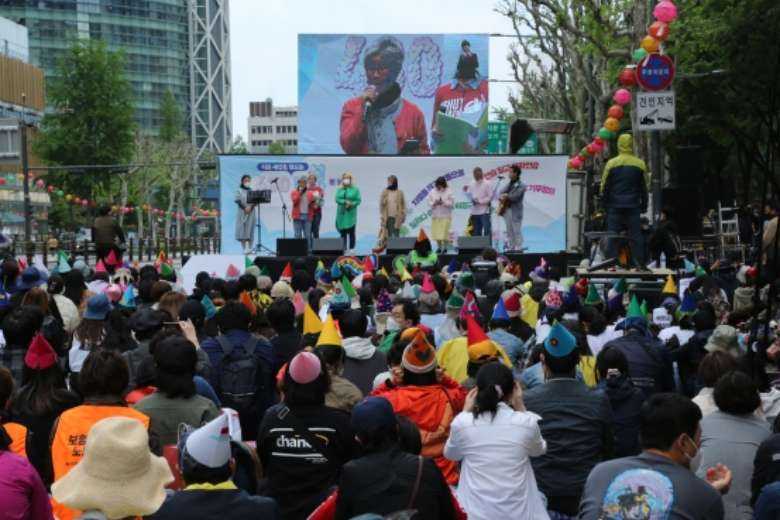 South Koreans participate in a cultural program held in Seoul, April 30, as part of a 40-day national march for the environment. (Photo: Catholic Times of Korea).

South Korean Catholic groups joined with dozens of civil society organizations for a 40-day tour across the country to raise awareness about the environment, and to decry any development projects that are deemed harmful.

The Spring Wind Pilgrimage brought together more than 80 civic organizations, including Catholic groups. It concluded with a cultural festival at Jongno, capital. SeoulReports of thousands of marchers who attended the April 30th event. Catholic Times of Korea.

Activists began the event by visiting the Korean War Memorial at Yongsan in Seoul. In the afternoon, the grand cultural fest featured music, dance, and other cultural performances that highlighted the event. Environment issues.

On their successful completion of the environmental pilgrimage, marchers greeted one another and hugged them.

Father Moon Jeonghyeon is a senior priest and environmental activist. JeonjuDioceseHe said that he had joined the pilgrimage from Jeju Island on March 15th and traveled all the route to Seoul to show the suffering of those affected by the environmental destruction and pollution.

He said that we must all work together to end the suffering of people due to environmental damage.

Augustine Park Grim, a representative from the National Action to Protect Seoraksan National Park, expressed concern over the government’s decision to install a cable car to the famous natural preserve and tourist destination.

Seoraksan National Park covers approximately 164 km in the east-central portion of the Korean Peninsula. It was listed as a tentative UNESCO World Heritage Site in 1982.

Seoraksan is the mother of our children. Park shouted, “Cancel the Seoraksan cablecar.”

Sung Wonki, cochairman of The Committee to Resist Samcheok Coal Fired Power Plant, attacked the government for moving forward with the project

He said that although other countries are decreasing coal-fired electricity generation, they are still building Samcheok coal-fired plants.

South Korean Catholic and environmental groups demanded that the government stop the construction of the thermal power station in Samcheok. This is a beach town in Gangwon province which is well-known for its cultural, educational, and tourism sectors.

Other than shouting slogans Climate justiceMarchers also demanded the end of discrimination and equality for South Korean workers as the 40-day pilgrimage came to an abrupt halt just one day before May Day.

After spending more than 30 years in the AOC program, a retrospective of the program

When designing inclusive environments, go beyond the guidance