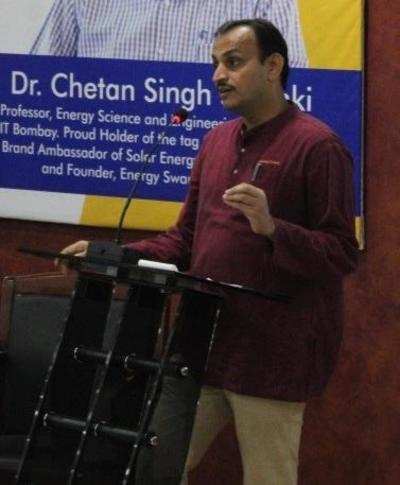 Nagpur: To create a better natural environment, three principles must be observed. These are to avoid electricity from conventional sources, minimize energy consumption, and generate electricity for individual uses using solar energy.
During a talk organized at St Vincent Pallotti College of Engineering, he spoke on the topic Energy climate changes and Energy Swaraj.
Solanki, a professor in the department energy science and engineering at IIT Bombay is also the brand ambassador for Solar Energy for the Madhya Pradesh Government. He is also founder of Energy Swaraj Foundation.
Solanki, speaking on behalf of Energy Swaraj, stated, “The aim is to make India independent and local self-sufficient in terms of electricity.” It is based upon Gandhi’s Gram Swaraj ideology, which encouraged the idea of being local enough in terms of food and clothing.
He said, “Everyone uses electricity, and therefore, is responsible for the undesirable climate change.” As Gandhiji was contemplating possible solutions, he suggested a public movement to revolutionize the energy industry.
Solanki is travelling across India in a specially-designed bus that uses solar energy to reduce carbon footprints, with the intent to promote Energy Swaraj’s call to action. He stated that he had vowed to travel in a bus for 11 years and not return home. He also said that he would educate close to 10 crore people about solar power in this time period. His travel will continue till 2030.
Solanki suggested measures to switch to solar power, stating that urban areas should use solar energy. Students in urban areas should begin to study under solar lamps, which are reasonably affordable at around a thousand rupees. This will increase demand for solar lamps and, subsequently, make them more readily available in rural areas.
He stated that anywhere from 30-40% Indians can afford to switch on to solar energy. Increased usage will result in a decrease of price and an increase in maintenance and repair facilities. Solar energy is becoming a household concept.
The event also featured Fr Paul Chandranakunel as director, Surendra Gol as principal, Rajendra Govardhan, Rajendra Govardhan, and Nitin Hote as Nitin. Shraddha Banode hosted the event and coordinated the programme.
(Reporting By Sahil Pawar