Research shows that older people are more likely to engage in conversation about the climate crisis when it is discussed in a group setting.

A study by King’s College London discovered that discussing the crisis in relation to caring for others and working together to find solutions could strongly resonate with the older population.

Over 65s are the fastest-growing age group and make up the largest percentage of voters. They could play a crucial role in tackling global warming. 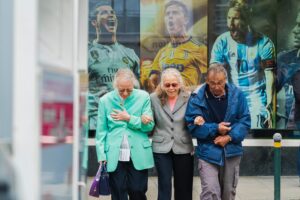 The study found that bringing together communities to make positive changes and focusing on the environment was the best way to address the crisis.

They also felt more emphasis should be place on who bears responsibility, but the group couldn’t agree on which age group is mostly to blame.

Others recognized their own abilities to make a positive change and find solutions for the planet.

The research found four key themes that were most important to older people when discussing the climate crisis – consideration and responsibility, community, power, and an international outlook.

Ms Latter, who’s research won King’s Best Thesis Award in 2018, said: ‘Whilst there’s rightly been a lot of focus on the younger generation in recent years, there’s been much less attention on older people despite the important role they could play and the impacts that climate change will have on them. This means it’s imperative that we have a better understanding in how to engage this group when we talk about climate change.’

In Related news, only four in ten parents (44%) of 16-18 year old’s believe the UK is teaching students about the climate crisis, according to research from organisation Universities UK.

5 new books on climate and poetry.

Climate crisis: Historic sites in Wales lost to the sea