In the first interview given to the local media, the Minister for Environment and Climate Change HE. Sheikh Dr Faleh Bin Ahmed al-Thani, in conversation with Abdullah Ghanem al-Binali al-Mohannadi Editor-in-Chief at Arrayah.

He has answered questions on a wide variety of topics, including:
When will the conflict of interests between the Ministries of Environment, and the Municipality be resolved
How will the ministry deal avec “dust “…and how will the crushers fare? (operating in stone quarries)
You could extend camping all year, or reduce fees.
How far has Qatar gone in its efforts to combat climate change?
When will the series on trespassing land come to an end?
What is the future of waste and wastewater recycling?
Is the current environmental law enough to deter violations?
What has the seawater quality monitoring stations done?
When will nature reserve doors be opened to the public again?
Is the ministry able to raise awareness about environmental risks? 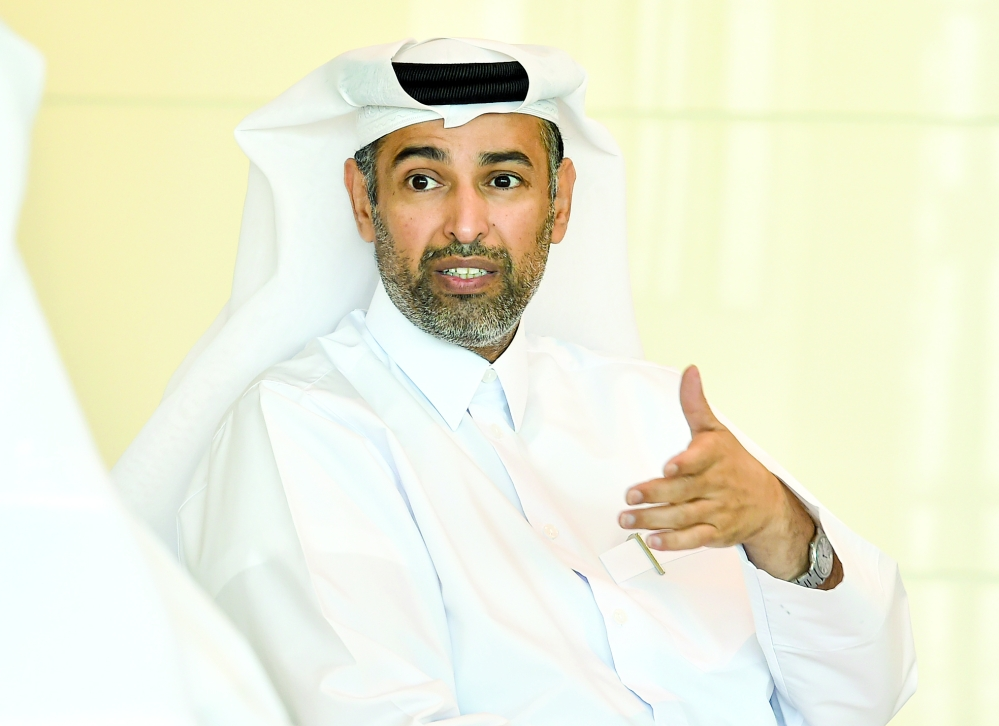 Excerpts of the interview:

It is worth noting that the ministry is currently working with the relevant authorities in the country to create the organisational structure for the ministry and specialized departments that will play a crucial role in the success sustainable development projects. They will achieve the ministry’s goals in preserving the environment, promoting green growth, and limiting the phenomenon of climate change. It will be implemented through Qatar’s National Action Plan for Climate Change 2030. It will represent the State’s environmental goals and aspirations.
This is in addition to other sectoral strategies that are being completed by the Ministry, such as the National Biodiversity Strategy 2015-2025 and the programmes in the National Action Plan to Combat Desertification 2015-2024. It will also implement programmes to reduce greenhouse gases and improve air quality to address climate change and global warming.
Protecting the ozone layer, restoring the biodiversity, protecting wildlife and marine life, combating the deterioration caused by various activities, combating desertification, and enhancing Qatar’s participation in international agreements regarding the environment and climate change.
He stated that the current situation of ministry requires the addition of new sectors, such as the sector of nature reserve and protection of wildlife.
Despite the existence a department to protect wildlife within the current structure it was primarily focused on protecting existing wildlife.
There are no special projects that can multiply, develop, or diversify them.
He also stated that one of the proposed solutions is to separate land and marine control, and establish an independent administration for each.
Another proposal is to establish a sector on climate change, with the aim of achieving sustainable and non-destructive development that does not adversely affect the environment.
We are working on legislation that will provide incentives to encourage members of the community to conserve natural resources.
He said that the ministry had completed the draft update to the environmental law and its implementation regulations.
It is currently being reviewed by the competent authorities.
Concerning the project to monitor nature reserves with cameras to monitor violation, he stated that there is a plan for security surveillance cameras to be installed in some fenced nature reserve to protect them from encroachments.
To test them, to ensure their tolerance to outside conditions and their efficiency for monitoring, the implementation phase of the project will begin. The cameras will then be installed in the targeted reserves.
The ministry is looking forward to utilizing the most current technologies and best practices to improve the efficiency of inspection and control, and reduce environmental abuses.
The country’s environmental monitoring patrols, which are located in various parts of the country, work round the clock to protect its meadows, reserves, and coasts from any environmental abuses or encroachments.
I urge all residents and citizens of the area to support it by reporting any environmental violations by calling the number 184.
The Ministry has the authority to set the environmental requirements of each project in relation to major projects, infrastructure projects, and industrial projects.
These inspectors are responsible for monitoring the implementation of these requirements during construction and after project operation.
The Ministry is currently implementing a project to operate and install a laboratory information management software system.

What is the purpose and scope of this project?
The Laboratory Information Management System (LIS) is one of the tools that improves performance in environmental labs according to international standards.
It is a program that improves productivity and efficiency in laboratories.
You can document data and laboratory analysis results in one database.
This allows for the tracking and analysis of data related to samples and experiments as well as the progress of laboratory operations.
It uses the best materials to ensure quality control and assurance (QC/QA).
What’s the explanation for this phenomenon? How large is it and how can it be prevented?
Fish deaths could be caused by one of the natural phenomena that occur in the Arabian Gulf, such red tides. These tides are caused by an increase in nutrients or phytoplankton within the marine environment.
The extent of fish deaths is dependent on the phenomenon’s spatial-temporal dimension.
Noting that the Gulf countries coordinate their efforts to monitor and track the development of this phenomenon.
The Ministry of Environment and Climate Change regularly collects samples of marine waters for analysis and monitoring of the concentrations of nutrients and phytoplankton.
You can also monitor the ratios between organic and inorganic chemicals variables.
He said that the ministry works every year to facilitate camping in terms of registration and procedures.
We look forward during the next season to add services to meet the camps’ needs, which will be announced in due course.
He said that it is difficult to make camping possible throughout the year. There is a committee that oversees the camping season and decides whether it should be extended.
He stated that the camping fees are fairly reasonable and not excessively expensive when compared to the state’s charges to provide many services for the camp.
Concerning complaints about dust and disturbance from crushers in certain areas, he confirmed there is a plan for 4 logistic areas to host activities related to the collection, recycling, and excavation of construction waste, gravel, and sand.
Responding to a question regarding the high prices of ordinary sand and washed sand, despite the availability in large quantities in Sealine, Al-Naqian and Sealine, he stated that sand is the most affordable commodity in Qatar. The price per cubic meter is QR4 and the cost of a full load is not more than 100 riyals.
Because of its low cost, some companies use it in areas other than landfill. Therefore, we will, in cooperation with Ministry of Municipality, review the issue of sand and either raise its price or establish specific procedures for its usage.
He said that the Ministries of Municipality and Environment have overlapping competences. Work is ongoing in coordination with the Ministry of Municipality in order to complete the separation process in a manner that serves both the interests of the parties and ensures the flow of work.
Both ministries have formed special committees to oversee the process of separation.
The committees have made a significant contribution to the separation process and it is expected that it will be completed in the near future.
He spoke out about the air quality monitoring stations at the World Cup stadiums and said that they are part the country’s expansion of its air quality monitoring network.
The ministry has contracted with a specialized firm to install, operate, and equip these stations in time for the 2022 World Cup matches.
They will include 8 stadiums and training ground. This is possible thanks to cooperation with the Supreme Committee for Delivery and Legacy, which selected and prepared the stations sites in accordance with the highest international standards.
The first air quality monitoring station located near Qatar University’s training grounds has been operationalized.
It is equipped using the most advanced international technologies and has been connected to the national air quality monitoring system in the country.
Also, Al Janoub Stadium received a station.
It is being activated now in preparation for its operation.
Al Thumama Stadium is currently undergoing construction of a second station.
His Excellency the minister concluded by answering a question on greenhouse gases and said: “The State of Qatar is aware of the urgent need to address this phenomenon and reduce the emissions of greenhouse gases, or what is known as the greenhouse gases.
Last year was a foundation for Qatar to move forward in its handling of this issue.
As the National Strategy for Environment and Climate Change was launched, which was developed around the axis of reducing greenhouse gas emissions within the five priority areas of the strategy, in addition to our submission of Qatar’s nationally determined contributions plan to the United Nations Framework Convention on Climate Change, which reflects the level of ambition that Qatar plans to achieve in addressing the phenomenon of climate change, besides the country’s declaration of its commitment to reduce carbon emissions in the country by 25% by 2030, to make Qatar a pioneer in this field.”

Environmental crime is being funded by legitimate investors