The new regional planning review for the Rivian electric vehicle plant contains warnings about the environment and cultural heritage in Morgan County, if the facility is built on the land just an hour east from Atlanta. 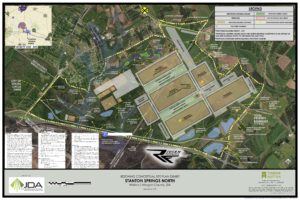 Rivian siteplan by JDA in Jasper, Morgan and Newton Counties. (File/Image via teslarati.com.)

The proposal to build a facility that was once welcomed by the community was reviewed by planners. The rolling land, which now includes four streams, woodland, open farmland and two roads, will be developed into a $5B manufacturing plant covering 20 million square feet. It is located on almost 2,000 acres. It’s to provide 7,500 full-time jobs.

A battery manufacturing plant will be built in conjunction to the Rivian plant. Other potential spin-off developments that are within walking distance to the plant include workforce housing, suppliers, and more public schools. Traffic to and fro the plant is estimated at 17,000 trips per day, which is a rate equivalent to 5,000 vehicles an hour during peak times. This figure seems to be for workers only, and not for supply trucks arriving and departing from the site.

NEGRC warns that public costs associated with this development must be fully understood at the beginning of the project. On sales and property, the estimated annual taxes are $100 million. The report notes that Morgan County should compare the expected tax revenue to the associated infrastructure’s lifecycle maintenance costs to ensure that the project is fiscally responsible.

The report cites threats to water resources from the facility thats to cover half the 2,000-acre site with impervious surface: The addition of millions of square feet of impervious surface would impede the ability of this land to serve as a recharge are.” Recharge areas allow surface water, from rain, to trickle through pores in the soil and become groundwater. The majority of the facility is to built in Morgan County. In addition, the entire Morgan County site lies in a water recharge zone marked on the county’s 2017 Sensitive Environmental Resources Map.

Cultural resources are endangered, even though they are not explicitly addressed in the proposal. A cemetery may be present. The states historic resources map indicates that the property contains three historic buildings, one historic site, and five other historic buildings. The report notes: It is important to understand the potential impacts on these resources and identify mitigation measures before any development.

The NEGRC’s report is important but not essential for government approvals of the plants.

Roadrunners win in the final seconds in an ‘electric’ environment| Roadrunners

The final report does not affect any governmental considerations for rezoning applications, or any other permits Rivian might need to proceed with construction. According to the Georgia Department of Community Affairs, state regulations only require that findings be considered before a local authority authorizes a project. DCA monitors projects large enough to have an impact on multiple jurisdictions. The state legislature amended regulations that gave more power to DRI reviews in 2014.

Rivian has had a series of setbacks over the past month that NEGRCs report coincides. They include the loss in a deal to partner with Korea to invent and make battery technology; a loss of $100 billion in market cap due to a valuation exceeding $150 billion after an initial public offering in November and a mandatory report dated Jan. 10 to Securities and Exchange Commission showing that vehicle delivery was 10 percent lower than expected. Rivian reported that it delivered 920 vehicles by 2021, a lower number than the 1,000 Rivian had predicted in November.

Gov. Brian Kemp has supported Rivians project and proposed a $112.6million allocation to the project in the budget for fiscal year that starts July 1. The money to aid Rivian would go to the Joint Development Authority of Jasper County Morgan County Newton County, Newton County, Newton County, Walton County, through the Georgia Department of Community Affairs. The Legislature is currently considering the measure as part Kemps overall budget proposal.