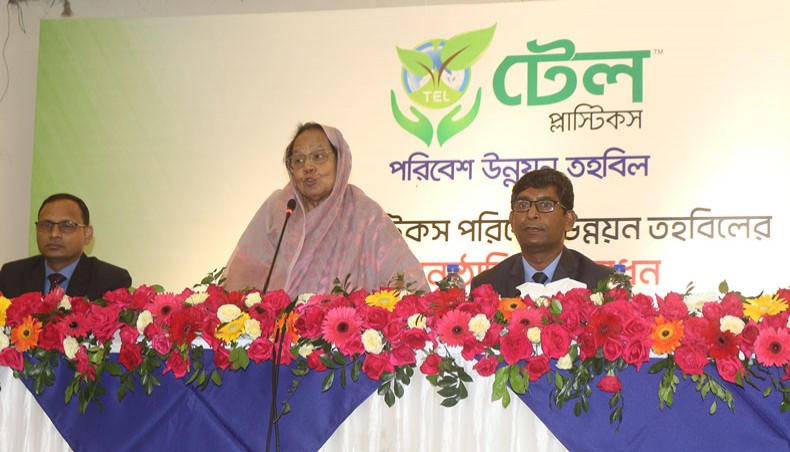 TEL Plastics, a brand of RFL Group, has launched `Environmental Development Fund’ for the development of environment.

Habibun Nahar, the Deputy Minister of Environment, Forest and Climate Change, inaugurated this fund at a Gulshan city hotel on Tuesday.

Minimum Tk 2 will be deposited in the fund from the selling price of various products of TEL Plastics. Later, the fund can be used to improve the environment.

Habibun Nahar, the chief guest, addressed the program and stated that the government was committed to creating a sustainable environment for the people of the country. He spoke as the chief guest.

RFL Group’s managing Director, RN Paul, stated the group has been involved since 2012 in plastic product recycling. The group collects about 30,000 metric tons of ‘used plastic’ every year. From here, approximately 27,000 metric tonnes are produced in raw material.

Kamrul Hasan, executive Director of TEL Plastics, stated that the fund will be used to plant trees, prevent environmental pollution, and create awareness about the environment through various programs. The fund will also be used for support of voluntary organizations that work in the environment.

According to a press release, Fahim Hossain (head of marketing at TEL plastics), Bashir Uddin (deputy general manager sales) and Mainul Hasan (senior brand manager) were present at the event.

Panther Pit opens in Boulder. It provides a safe environment for children after school

LifeLabs honored for Environmental Excellence in its fourth consecutive year

White clay mining is a threat to the environment and people