Both the Environment and Resources Authority and the Superintendence for Cultural Heritage raised serious concerns about a planning request that sought to build a poultry farming operation on agricultural land in Gozos Wiedgasri.

According to the ERA, the proposed poultry farm would occupy approximately 660sqm of an otherwise undeveloped area with high landscape value.

The ERA is very concerned about the plans for farms in the open country, as approval of such development would likely increase pressures for similar developments within this rural area ODZ (Outside Development Zone), according to the ERA.

While expressing similar environmental concerns to the SCH, the SCH also highlighted the fact the proposed site is located just 225m from the Chapel of Patronage of the Virgin as well as a small hamlet nearby, and just 140m from a grave to its south.

The context is culturally sensitive and the Superintendence expresses concern immediately about the proposed development. It consists of a poultry farming facility with ancillary facilities.

The Superintendence expressed concern that the proposed development would be too large within this culturally sensitive area.

Five residents living in the vicinity, together with Gozo Farmhouses Ltd, filed a lengthy joint objection. This objection is one of many that have been filed prior to the closing of the applications public consult phase on February 1.

The submission includes visual renderings from long distance photomontages. This should have been submitted to the applicant architect. Objectors pointed out how the proposed building height, 4.33m, would not fit into the rural context and would be detrimental to the visual integrity in the area. 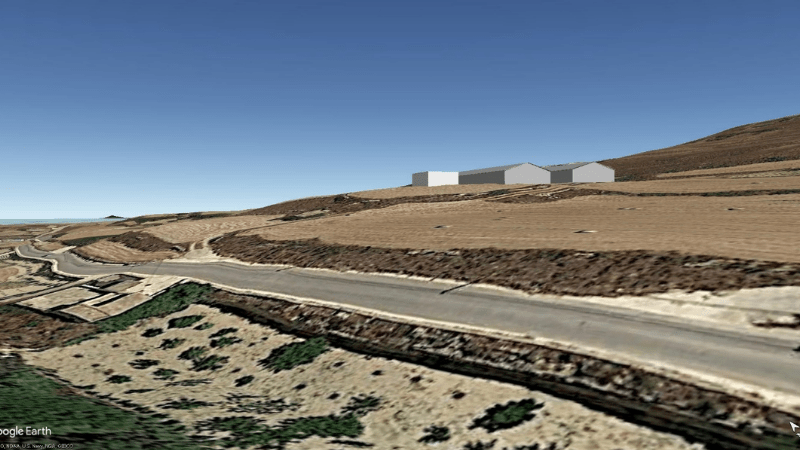 A photomontage showing the proposed poultry farm as submitted by residents.

The joint objection referred to investments in properties that can be rented out for vacation purposes, a practice that has been established for many years.

A chicken farm located close to these properties would mean the end of this industry. The objection states that the noise from machinery, obnoxious smells, and operating hours of the chickens are all reasons for the closure. All objectors reserve their rights against the applicant and the Planning Authority (PA), if any decision is made to prejudice this industry.

The Shift published an article three weeks ago highlighting the numerous violations of environmental laws that the proposal would lead to. Residents objected by Louis Cauchi, who is not officially registered as poultry farmer.

The objection also highlights the unconfirmed suspicion of Cauchi that he is not the real owner of the land. This could indicate that Cauchi may have made false ownership declarations. The applicant could not reach the applicant for comment.

The proposal not only violates several rural objectives in the PAs Strategic Plan for the Environment and Development (e.g., the need to protect good quality agricultural land and the need for development that is compatible with its surroundings), but also violates Local Plan directives.

Wied Gasri should be considered protected land due to its designation as an Area with High Landscape Value, a Category B valley, and Land of Agriculture Value. A 100m distance from the site is a natural spring that could be affected by any runoff from a proposed poultry farm.

The objectionors also raised concerns regarding how vehicles could enter and exit the site. They would need to request third-party access to the road. This would increase parking and traffic problems.