There are claims that the infrasound they produce can damage your health. And many regard the towering giants to be a blight on the landscape. There are also questions about risks to wildlife and some see inequity in the distribution of profits.

Here’s a reality check in the face of such headwinds:

Is wind power a threat to the landscape?

Wind farms have a profound impact on the landscape. The turbines have become ever taller and the blades now reach lengths of up to 250 meters (820 feet). The bright grey structures can be clearly seen in good weather. However, this also applies to other methods for power generation. Coal mining can swallow entire villages and raze forests while high-voltage transmission lines crisscross landscapes, and smoke and steam from towering power plant chimneys and cooling stacks can spread many kilometers into the sky.  By comparison wind turbines are clean and don’t emit particulate matter, mercury or carbon dioxide.

Compared to the rest of the world, densely populated Germany has a well-developed wind power industry that meets almost a third of its domestic demand. The acceptance of wind energy is high. 80% of the population believes that further development of onshore wind farm is important. Around 47% believe that having a nearby wind farm is either “somewhat important” or “very important.”

62% of Germans prefer to live near a photovoltaic farm. This contrasts with the 6% for nuclear power plants and the 4% for coal power stations.

Are you sickened by the sounds of wind farms?

Infrasound, which is a low frequency sound below 20 hertz, is also produced by wind farms. Low frequencies are difficult to hear by human ears. This infrasound can also be produced by ocean waves and waterfalls, as well as machines like air conditioners, heaters, pumps, and pumps.

Opponents claim that the infrasound generated by wind farms is damaging to human health. Studies show that wind farms produce significantly less infrasound compared to car traffic. Experts have thus ruled out any damage from wind farms infrasound according to the latest research. 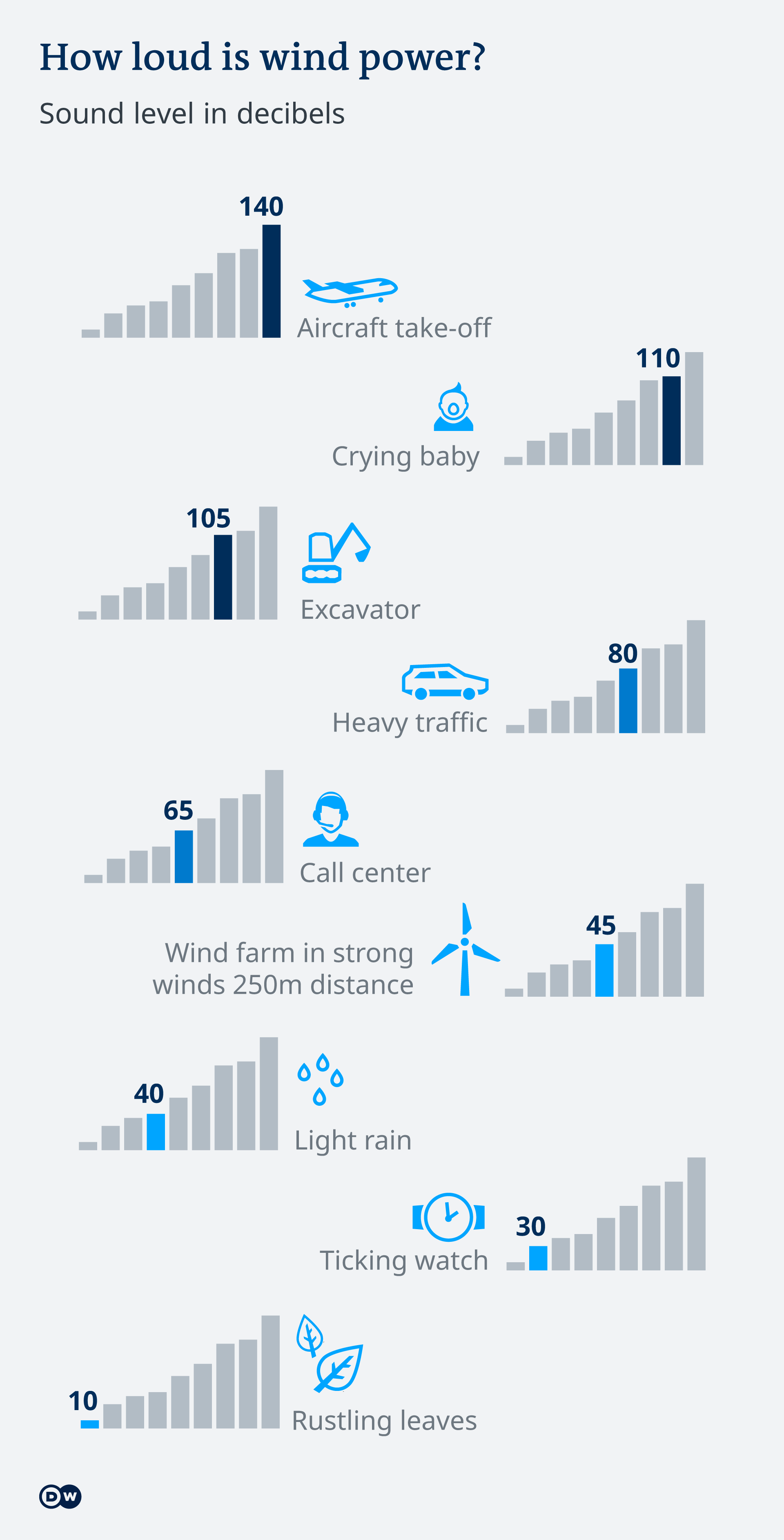 Wind farms are not louder that heavy traffic below 250 meters

Can wind power harm birds and the environment?

Wind farms, like roads and buildings, are an intrusion into nature in that they have concrete foundations dropped several meters into the ground. In addition, their blades can kill high-flying bats and birds a reality opponents often use to argue against this form of renewable energy.

Planning should minimize environmental damage as much as possible. Wind farms cannot, for example, be built in protected areas. The best locations for wind farms are in areas that have not been polluted by mining, intensive farming, or monoculture coniferous forests.

Modern wind farms are safer for birds and bats than the older designs. They are also much higher than they were before, and animals can fly under the blades. The rotors can be stopped by bat sensors, which will stop animals from flying too close.

Another technology uses intelligent cameras that recognize large birds of prey such as high-flying Eagles and shuts down turbines to prevent collisions.

The Nature and Biodiversity Conservation Union of Germany (NABU), estimates that wind farms in Germany kill more than 100,000 birds every year. This is a low number compared to other hazards.

Glass-covered buildings kill approximately 1,000 times more birds (108 millions) annually than wind farms. Around 700 times more (70 million) die in collisions with cars, trucks and trains, while 20 times more (2 million) lose their lives to power lines and 10 times more (1 million) are killed through hunting. And domestic cats alone are responsible for the deaths of some 60 million birds in Germany each year.

But by far the biggest threat to birds is industrial agriculture, according to NABU. Monocultures and the use of pesticides, has seen the number of insects decline massively, removing a major source of food for birds raising their young. In Germany, 13,000,000 breeding pairs have disappeared (15%) in the last decades, which has resulted in 170,000,000 fewer young birds each and every year.

While wind farms can kill some birds, the loss is not as significant as other dangers.

Sometimes the wind simply doesn’t blow, meaning the rotors remain idle and no power can be generated. Additional forms of energy production and storage are necessary to maintain a reliable power grid.

Norway and Costa Rica have both already implemented 100% renewable power grids. Alongside wind, they rely on hydropower, geothermal energy, biomass and solar power.

These other renewables can also compliment wind power in other parts of the world. A different mix of energy sources may be possible depending on where you live. This can be achieved in certain areas by large-scale green hydrogen plants or large-scale batteries.

Profit only from the wealthy

Wind farms offer a lucrative opportunity with potential returns of over 10%. Not only do large corporations benefit from this, but also municipal utilities and local cooperatives. Wind farms can also cause resentment in the local community if they aren’t able to see the profits. Projects that are launched by outside investors often fail.

Local citizens who can invest in the project and share in the profits will have a higher acceptance rate. These projects can be funded with individual shares starting at a few hundred euros. Another route to success is for a municipality to invest taxes from wind farms into local projects such as kindergartens.

Many wind farms allow citizens to take part in the operation. There are many in the world, but a high number in Germany. Rural communities see wind power as a chance to secure new jobs and prosperity.

This article was translated from the original German.

Wind power: What is truth to the claims?