AMERICA/PARAGUAY: May Christians be the guardians of the environment in solidarity with those who fight against drought and the voracity fire. 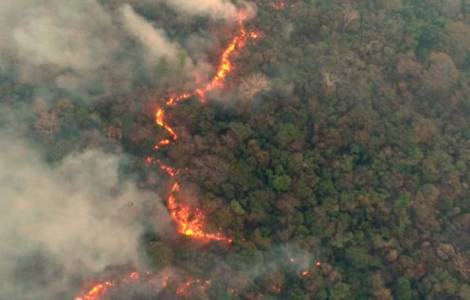 Asuncion (Agenzia Fides) – “We ask for our Christian brothers to be custodians, we ask for solidarity with the authorities and volunteers that fight against the voracity fire and drought, and above all, we ask for their responsibility so that this evil doesn’t continue to damage our environment and our health.” This is the appeal made by the Paraguayan Episcopal Conference, in response to the increase in forest fires. These are still uncontrolled. “This situation worries us and alarms, because the environment and its protection are a collective good,” explained the Bishops in a statement sent to Fides.
To reduce this problem, the bishops urge the public to refrain from burning garbage and setting off forest fires. “It’s our responsibility – they keep – to promote environmental care, good practices for our ‘common house’, rational land and water use, and to protect the environment. The bishops also mention the suffering caused by drought in the countryside, which is caused by lack of rain, which affects poor peasant families, as well as the loss of large agricultural plantsations. They urge the national authorities in order to promote a law to protect those most affected by drought and lack of rain in the country. According to the Civil Protection of Paraguay on January 24, 409 fires had been lit in the country and 3 559 within the past 24 hours. According to the volunteer fire department, there have been approximately 16,000 fires since the start of the year. President Bentez announced several measures to assist the most affected areas. Paraguay (surface 406,752km; population 7,353,000) is completely flat and has no access the sea. The economy is based on agriculture, hydroelectric resources, and other natural resources. (SL) (Agenzia Fides, 26/1/2022)