Although Madagascar is blessed with abundant water, it has experienced a change in its hydrological cycle due to global warming. This has led to drought and famine. 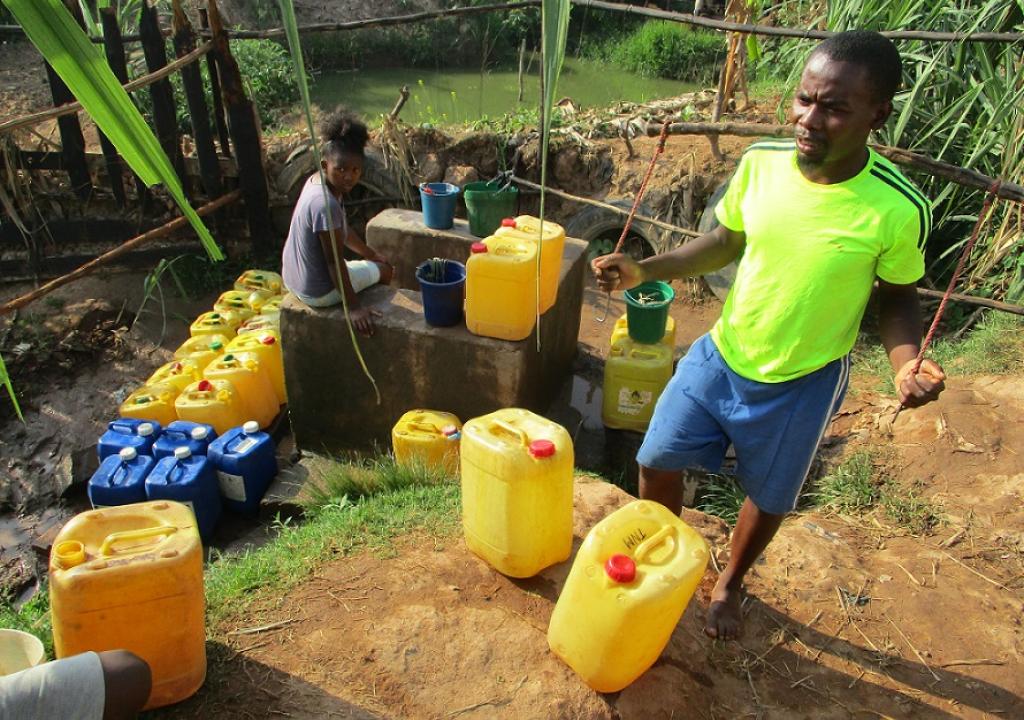 Fetra R and his wife have, for months, ensured water for households out of the state-owned electricity and water company Jirama’s clients’ network in Madagascar’s capital. Photo: Rivonala Razafison

Madagascar, the world’s fourth-largest island, located just across the Mozambique Channel from the coast of mainland Africa, became notorious late last year after water became more expensive than food in the country.

This was acutely felt in the country’s drought-hit southern regions. It is still felt.

Twenty litres of water are priced at Ariary (Ar)2,000-Ar4,000 (Rs 37-Rs 75) — almost the half of a daily salary for a poor peasant — outside the regional capital city of Ambovombe, according to local businessman Tsimanaoraty Paubert.

Many in Madagascar’s capital Antananarivo and its suburbs risk their lives to access water for basic human needs. “I hardly sleep at night. I have to stay awake till midnight in order to collect water at the drinking fountain near my home,” local photojournalist Hervé Leziany said.

Water has become a luxury in his neighbourhood located in the western suburbs of the country’s main city. It is only available between 11 and 2 AM.

Antananarivo’s eastern suburbs are home to many who wake up at 1-2 AM to fetch water at the community-managed well located on a downhill marsh, where locals have been coming to for years.

“The stock is not sufficient for everyone. If you arrive late, the water level will rise again and you won’t be able to refill your cans. The well dries up quickly and takes hours to replenish itself,” Fetra R complained on December 20, 2021.

The 25-year-old man and his wife have, for months, ensured water for households out of the state-owned electricity and water company Jirama’s clients’ network.

Students at Antanarivo University were upset by water shortages and took to the streets to clash with police in November 2021.

Social media users are not happy with the government. Jirama is accused in the media of not being able to deliver quality service. Its water seems to be unsafe, according to civil society organisations that voice concerns about the rising socioeconomic hardships in the island and the precarious living conditions.

Many try to avail water in whatever way they can, mostly from the insalubrious water sources in Antananarivo’s plains and elsewhere for domestic purposes. People with cars collect stagnant water at riverbanks miles from the city every day.

In rural areas, all means of transport are used for the same purpose, including carts, bikes, motorcycles, and bicycles. Farmers, particularly rice growers, are on alert.

“The same quantity could be obtained at Ar500 (Rs 10). But the resale results in the water’s price rise at the final consumers’ level,” a source said. Therefore, the poorest go outside the town to get water from the puddles on the roads after it rains.

The current drought and water situation across Madagascar, one of the world’s poorest countries, appears to be paradoxical.

According to the 2016 results of the World Bank-funded natural Capital Accounting, the available renewable water resources per capita averaged 23,057 cubic metres between 2001 and 2013. They were 13,169 cubic meters in 2013 according to the report. These indices were considered to be amongst the highest in the globe.

“The current disruption in the water resource availability in Madagascar is due to a significant shift in the water cycle. The issue is being frequently felt in the highlands,” Herinjanahary Ralaiarinoro, head of the hydrology unit service within the country’s meteorology department, said.

“The rainy season has become shorter than before. It stops raining as of March while the heavy rains fall in January,” he added.

How Bay Area Art Galleries are Responding to the Climate Crisis

He explained that this short time was not enough to feed the aquifers. “A shortened wet season means prolonged drought. The water availability declines as of April and this continues until the next rainy season which is delayed year after year because of low rate of atmospheric humidity, which affects the clouds’ formation,” Ralaiarinoro said.

The future is likely to see more water scarcity.

“Like in 2019-2020, the country is now experiencing a prolonged dry season related to the La Nina phenomenon in the Pacific Ocean. Rainfalls are delayed. The rainy season starts later than expected. We have the first rains only in December-January,” Mamiarisoa Anzèla Ramarosandratana, head of the climate adaptation section within the meteorology department, said.

She explained that the current prolonged drought was a natural continuation of the low rainfall in 2019-2021 and 2020-2021. Madagascar has only received 60% of its normal average rainfall for the last two years. This is the lowest rainfall in 30 years. “This would furthermore accentuate the water scarcity in 2021-2022,” Ramarosandratana warned.

To combat the drought-induced water scarcity, the government has started cloud seeding operations through Jirama. “We have conducted over thirty operations since November,” Miakadaza Harinjaka Randriamahandry, a meteorological technician, said.

The initiative was a boon for the Malagasy highlands. It rained in Antanarivo, for example, days before Christmas. However, the high temperature and no rains returned just a few more days later.

The objective of the Malagasy government to attain 100 per cent drinking water access rate by 2030 — against 43 per cent currently — would be a utopia without long-term measures. It is possible that the country’s high rate deforestation and global warming are also contributing to the changes in the hydrology cycle.

“Without forests, we have lowered humidity in the atmosphere. We need to maintain the existing forest cover in order to let precipitation infiltrate the ground,” Ralaiarinoro said.

In an effort to rebuild its green architecture and restore ecological balance, the country has been planting 60 million trees each year since 2019.

We are your voice. You have been a supporter of us. Together, we create journalism that is independent and credible. You can also help us by making donations. This will help us bring you news, perspectives, and analysis from the ground. Together we can make a difference.

Food Waste and its Relationships to Greenhouse Gases, Climate Change and Other Issues