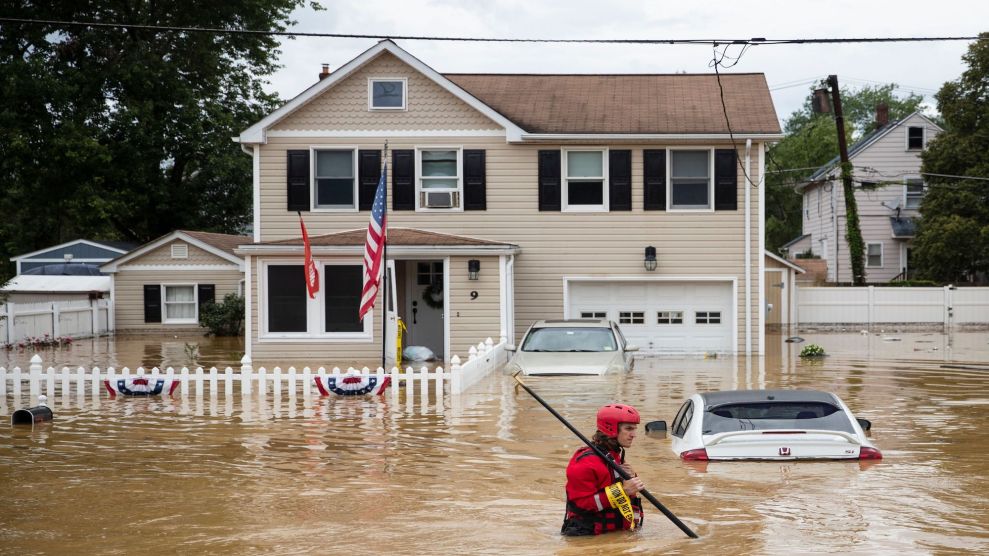 This story was first published by HuffPost and is reproduced here as part of the Climate Desk collaboration.

Climate change could be a possibility bombard the US financial system on many fronts, and the nation’s growing dependence on natural gas for heating and electricity requires particular scrutiny as regulators scramble to catch up on the threat.

That’s the conclusion of a landmark report from the Financial Stability Oversight Council, the federal entity established after the Great Recession to guard against future economic disasters. It marks the first time the council has deemed climate change an “emerging threat” to the US economy since the council was created as part of the Dodd-Frank financial reforms of 2010.

“Are we behind? Of course we are,” a senior administration official on the council, who declined to be named on the record, said on a press call. “This is the starting gun going off for the US financial regulatory system.”

“Are we behind? Of course we are,” said a senior administration official.

The assessment came just days after British regulators called on companies to disclose strategies to swiftly zero out planet-heating pollution and their European Union counterparts outlined plans to test banks’ ability to withstand climate-related shocks. Emphasizing the political challenges the US faces in confronting the crisis, the Biden administration’s plan to cut roughly one-third of the nation’s emissions appeared to die in Congress, setting policymakers scrambling for alternatives.

“This is the step we’re taking to catch up and put ourselves in a leadership role internationally, which is where we want to be,” said the staffer, who has worked at FSOC for 10 years. “And this is the way to do it.”

The myriad ways warming-fueled disasters, or hapless attempts to avert them, could upend the US economy unfold in dry, sober language across the report’s 133 pages.

The physical effects of climate change could cause financial contagion. Extreme weather and flooding may render regions of the country too costly to insure, condemning entire communities—households, businesses and governments alike—to economic and financial precarity with unclear options. The mounting toll of physical damages could wipe out the income properties generate or destroy the value of assets used as collateral, “posing credit and market risks to banks, insurers, pension plans, and others,” the report states.

The solution to climate change could pose another threat. With each passing month that pollution from burning fossil fuels and felling forests for cattle ranches increases, the speed of change that’s required to avert cataclysmic temperature rise climbs. If countries take divergent paths and fail to coordinate, it could “sow confusion or create large inefficiencies, thereby possibly straining the financial system.”

According to the report, coal is already in decline. 65% of US coal plants have closed down in the last decade. However, the United States had nearly 200 gas-fired plants in construction in 2019. Natural gas is more carbon-intensive than coal but still emits tons climate-changing pollution.

“This is the starting gun going off for the US financial regulatory system.”

Reaching the US goal of net-zero emissions by 2050 “would require sizable reductions in the use of natural gas,” the report warns, suggesting the value of gas assets could plummet even more chaotically than coal.

“A thorough assessment of the potential for stranded assets in these sectors should be a priority for financial institutions in their risk management processes and a component of a regulatory scenario analysis,” the report states. The senior official declined to comment further.

Climate crisis: Car use and home energy are seen as the greatest barriers to becoming greener for Northern Ireland

The report, which President Joe Biden called for in an executive order this spring, is “unprecedented” and “sends a strong signal to industry, to Wall Street, that regulators are waking up to this issue and taking it seriously,” said David Arkush, the managing director of the climate program at the consumer watchdog Public Citizen.

Still, he said, “It is extremely far short of what is needed. It almost reads to me like the memo that should have started this process in May when the president issued the executive order.”

The document could have offered more prescriptive solutions, including calling on the Federal Reserve to cap how much of an investor’s portfolio can include unmitigated fossil fuels or proposing banks that own risky oil and gas assets keep a certain amount of cash on hand, said Ben Cushing, the campaign manager of the Sierra Club’s fossil-free finance program.

“This report makes it clear that financial regulators understand the need for action to ensure that the climate crisis doesn’t cause the next financial crisis,” he said in an emailed statement. “However, by leaving out key risk-reduction tools, it is not treating the problem with the urgency it deserves.

Simon Johnson, an economist at the Massachusetts Institute of Technology, said he was “optimistic that the needle is beginning to move.”

Asked whether the fact that US financial regulators are only beginning this process now, when the number of billion-dollar weather disasters increases each year and United Nations scientists say the emissions crisis has reached a “code red” level, the senior administration official said: “I reject that conclusion.”

“The whole purpose of this is to communicate the opposite,” the official said. “We are ready. Ready means we’re engaging in a significant way.”

A key component of corporate climate pledges is supply chains