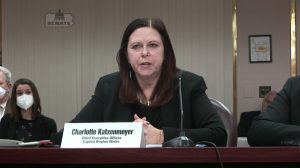 Capital Region Water (CRW), is having difficulty getting one of its largest customers pay its stormwater fee.

Representatives from Harrisburg’s water and sewer authority urged the commonwealth to contribute, as it has not been paying its stormwater fees.

Representatives from CRW stated Tuesday at a meeting of the state Senate Environmental Resources and Energy Committee that $32,246 per monthly or $386,956 annually are fees assessed on almost 5.4 million square feet impervious surface under CRWs jurisdiction.

This means that there is no fee force that can be paid by the community, such as residential ratepayers or commercial businesses. Marc Kurowski, president of CRW, stated that this is a result of the absence of that fee.

CRW proposed a stormwater fee in 2019 as part its City Beautiful program to raise funds for infrastructure improvement projects in the city. The investments would be used to meet the U.S. Environmental Protection Agency’s clean water requirements. The fee went into effect in October 2020.

According to CRW the stormwater fee raises funds for approximately $170million in green infrastructure improvements in the City and updates to the System over the next nine years.

The average Harrisburg resident pays $6.15 per monthly for the fee. Commercial and other customers are charged according to the impervious surfaces on their properties.

Kurowski stated that CRW found this to be the most fair way to raise funds for stormwater improvements. However, it does not place all the cost burden on Harrisburg residents who many of whom are below the poverty line. CRW estimated that $5.3 million could be raised annually if everyone contributed.

Kurowski said that Harrisburg customers with large properties like the federal government, churches, and businesses have already paid the fee. However, the commonwealth still has not paid for any properties, including the Farm Show Complex which has numerous, large, paved parking lots.

CRW estimated that the $386 956 per year from the state could be used to finance a $7 million PENNVEST Loan to help reduce the impact of stormwater runoff on the city.

Kurowski pointed out that not only is the commonwealth evading stormwater payment in Harrisburg but also in many other cities.

The optics of this for our commonwealth are terrible, said Sen. Gene Yaw (chair of the Environmental Resources and Energy Committee). It seems that there is something seriously wrong.

Charlotte Katzenmoyer, CEO of CRW, explained that the state had argued that CRW does not have the authority tax the commonwealth. She said that the stormwater fee does not fall under the definition of tax. Katzenmoyer cited caselaw that stated that taxes finance general government operations while fees are limited to specific services and must be reasonably proportional.

CRW stated in a statement that the stormwater fee does not generate revenue for a variety of uses like a tax. Instead, it raises dedicated revenue that will be redirected into the system for stormwater projects.

Kurowski stated that CRW may file a lawsuit if the state’s attempts to communicate with them fail.

Katzenmoyer stated that the failure of states to acknowledge their role is confounding, and without merit.

If you like what we do please support our work. Be a friend to TheBurg

Employees Feel the Burdens of Inequality in Hybrid Work Environment