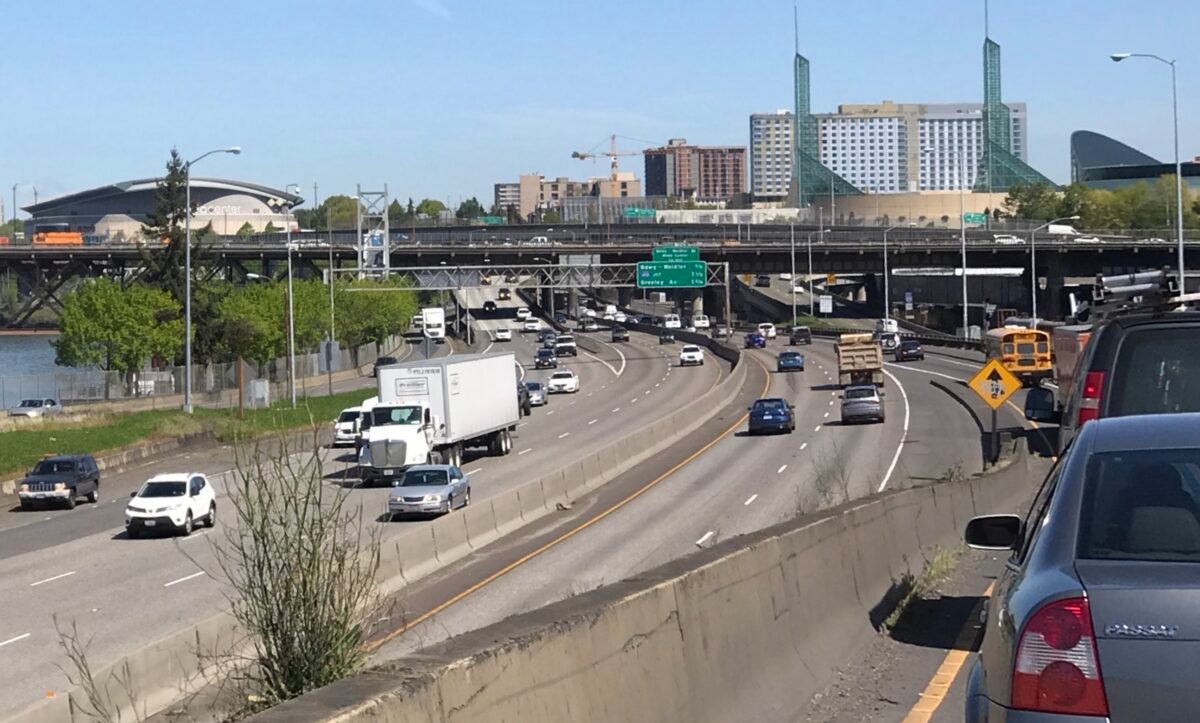 I-5 northbound via the Rose Quarter.
(Photos by Jonathan Maus/BikePortland

The federal government has given them another assignment, much to the delight of a large coalition of Oregon Department of Transportation criticisms.

On Tuesday, the Oregon Division Administrator for the Federal Highway Administration Phillip Ditzler sent a letter to Oregon Department of Transportation Director Kris Strickler with eight words that could throw a wrench into the project’s progress: “I hereby rescind my approval of the FONSI.”

FONSI stands for Finding of No Significant Implication, which is a crucial decision that all mega-freeway projects must make in order to be successful. The National Environmental Policy Act sets out the legal process (NEPA).

Ditzler’s decision is a setback for ODOT, who’s been directed by the Oregon Legislature to address congestion on the freeway with requisite urgency as the top transportation priority in the state. ODOT has decided that more lanes for car and truck drivers is the answer and they’ve already spent millions of dollars planning it.

A FONSI (Foundation of Non-Specific Information) is what happens after an agency has completed an Environmental Assessment. The FHWA approved ODOT’s EA for this project and The FONSI was granted in its initial formODOT has rescinded its plans to expand southbound I-5 lanes, but this was only after ODOT had halted its plans for the Eastbank Esplanade/Willamette River crossing.

I-5 Rose Quarter Project Megan Channel seemed eager and ready to move on, with this hard-fought feather in the cap. “While this closes the chapter on the Environmental Assessment,” she said in November, “Now the real work begins.”

Channell’s statement is half right.

The recission of the FONSI means Channell and her team must re-open the EA and do more work to prove to Ditzler that the project won’t have “significant impact”. If they fail to do so, they will be required by Ditzler to conduct a more thorough and detailed Environmental Impact Statement. This is a lengthy step ODOT and OTC have tried to avoid and have been criticized for.

A coalition of critics disagreed with ODOT’s EA findings and filed a lawsuit against the agency based on the FONSI in April 2021. The plaintiffs in the suit are No More Freeways and Neighbors for Clean Air. They dispute ODOT’s findings about the extent of negative environmental impacts this project will have on adjacent neighborhoods. ODOT claims that a freeway with more driving capacity will actually increase greenhouse gas emissions. They claim it will reduce idling traffic. ODOT is making this dubious claim in order to conduct friendly research.

In a Press release issued Wednesday night, No More Freeways co-founder Aaron Brown said he is “delighted” with the FHWA’s decision. “No More Freeways has said for a long time that ODOT has not meaningfully studied the disastrous impacts this proposed freeway expansion would have on our community. We look forward to continuing to encourage Governor Kate Brown to demand that ODOT complete an Environmental Impact Statement that will study alternatives to freeway expansion.” 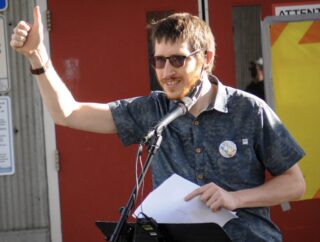 Aaron Brown, cofounder of No More Freeways at a rally in opposition to the project in April 2021.

ODOT has attempted to move on from the controversial steps in NEPA, but project opponents have not. Yesterday a group of youth climate activists, their supporters, and Portland City Council Candidate AJ McReary stood in the rain on the Flint Avenue bridge overlooking I-5 traffic for week 19 of their “Youth vs. ODOT” rally.

Adah Crandall, a youth organizer with Sunrise Movement PDX, said in a statement yesterday, “We are grateful to see ODOT finally held accountable for their neglect to fully study the impacts of this project, which is a direct threat to our communities and climate.”

A Sunset Review of Texas’ environmental agency is underway. Here are the reasons why it matters

The lawsuit from No More Freeways accuses the agency of using faulty traffic projections that, “included multiple egregious errors and outdated assumptions”.

In his letter Tuesday, the FHWA’s Ditzler told the director of ODOT he made the decision based on a re-evaluation of a new analysis of the project and that ODOT must submit “additional analysis… so that the Federal Highway Administration (FHWA) can render an appropriate decision on the significance of the impacts based upon the new information.”

In a Statement released Thursday morning, ODOT clarified the FHWA’s decision is related to changes in the project related to the highway cover design, which changed after the FHWA’s initial decision was made. Channell says the FONSI decision won’t cause a delay. “With guidance from and in partnership with the FHWA, we can still begin construction on time in 2023.” “Updating the Environmental Assessment is an important step to advance the communitys preferred Hybrid 3 highway cover design and is a step we anticipated and are excited to take,” she added.

Technically, ODOT cannot proceed with the project until they meet all EA requirements and Ditzler. This means that there will be more work and more time. ODOT will likely quickly convince Ditzler to reinstate FONSI due to their urgency. In a panel discussion hosted by the Portland Business Alliance this week, OTC Member Alando Simpson said, “I think were obsessed with process and we waste a lot of time and money on things… The more we delay projects, the more expensive they become.”

The OTC Meets today. The original agenda did NOT include a discussion on the I-5 Rose Quarter Project or this announcement made by FHWA. The link to the agenda was broken when I tried it again a few minutes later. We might not hear ODOT staff and/or the OTC address this decision at their meeting today, but it’s almost certain project critics will bring it to their attention during the public comment period.

Jonathan Maus is BikePortland’s editor, publisher and founder. Contact him at @jonathan_maus on Twitter, via email at maus.jonathan@gmail.com, or phone/text at 503-706-8804. Please consider becoming a supporter if you enjoy this site.