Their new book is available here Farming for Our Future: The Science, Law, and Policy of Climate Neutral AgricultureNathan Rosenberg and Peter Lehner write that agriculture must go beyond producing the Four Fs (food, feed, fiber, and fuel). They argue that the climate crisis requires that agriculture add a fifth F: a future. Lehner, who directs Earthjustices Sustainable Food & Farming Program and Rosenberg (a visiting scholar at Harvard Food Law and Policy Clinic), discuss a variety ways that the vast array policies that support U.S. Agriculture can be reoriented to mitigate climate change. They also challenge our preconceived notions about farmers and their role in rural communities. This conversation was edited for clarity and length.

Back Forty You will receive regular reviews, interviews, reporter insights and journalist insights about the stories they have written. Register here or click below.

Why should we pay more attention to agriculture’s role in climate change?

Lehner: The EPA greenhouse gases inventory states that agriculture contributes only 10% to U.S. greenhousegas emissions. If you look at all elements of agriculture and compare them to policy-relevant timescales (20-year global warming potential vs 100-year), which makes methane much more important, then you will see that agriculture is actually equal to the transportation sector in terms od emissions. We simply won’t be able to achieve our climate change goals, let alone our environmental health, public health or justice goals, without reforming our agriculture system. 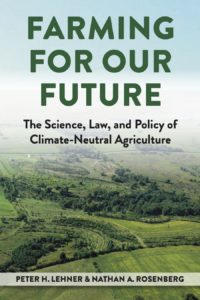 You bust some myths about America’s farmers. You write that the image of the struggling family farmer is inaccurate. However, you show that farmers are far more wealthy than the average American. These outdated narratives are why it is important to change them.

Rosenberg: The Census of Agriculture includes a lot of properties and people who don’t necessarily consider themselves farmers. They may do it as a hobby; they don’t sell or produce any agricultural products. However, these data are used in order to create a misleading picture regarding farmers and farming. This masks the fact that the majority of agricultural polluting is done by a small number of large, well-financed operations. And even if we just regulated the worst actors, we’d have an incredibly important impact on agricultural emissions.

You claim that farm policy should address the needs of a wider array of people. Who are they?

Rosenberg: We are focusing on three constituencies: rural residents and non-white farmers. These groups don’t get much of a say in farm policy, and this has had drastic consequences. Farmworkers in most states don’t even have basic labor rights. Rural residents are the most affected by agricultural pollution. Non-white families have been virtually excluded from the wealth-producing agricultural aspects, which has had significant consequences for their political power as well as for racial inequalities. Excluding these communities from the conversation and conflating the farm economy with the rural economy, or the interests of farmers with rural interests, obscures these voices and helps perpetuate systems that don’t benefit society broadly.

Another theme is that farmers must be rethought in order to increase their productivity. This can be done by using public funds to encourage them to combat climate change.

Lehner: Public health epidemics of obesity, diabetes and cardiovascular disease have been created by the food we eat. Our food system is causing more public health problems than smoking. While at one point we could say that farming should focus on productivity, on producing calories, that’s just not the case anymore. Society now needs healthy food and climate stability from its soil, air, water, and land. The land is a valuable asset. The land can be managed by great people who will produce what society needs. We heavily subsidise the production and use of soya and other commodity crops. We don’t need as much soy or corn as we think. We need a stable climate. And that’s what we should be subsidizing.

There are many programs that help farmers, including crop insurance, extension, research and conservation payments. How can these programs be reoriented so they support climate-neutral farming, especially with the next Farm Bill renewal?

Rosenberg: Both Congress and the Biden administration can do a lot right now, through executive action. We want to use agriculture to store carbon, in addition to reducing greenhouse gas emission from agriculture. It is vital that soil health be a priority in public policy. It is also crucial to increase biomass through perennial agriculture and systems such as agroforestry. This is something we can encourage through better and more focused research funding.

Lehner: In the 1980s and 90s when I started working on clean energy, it was very costly and it wasn’t clear how to move toward renewable energy. Today, farmers all over the country are using very productive practices to store more carbon in the soil and in biomass. This is reducing greenhouse gas emissions, and producing healthier food. The question is not whether we can scale up and improve the existing knowledge, but rather if we have to invent it.

We already have lots of programs that are spending billions of dollars every year that can be better targetedwe don’t have to find new money. For example, we’re paying farmers for conservation programs, many of which, the NRCS itself has found, are counterproductive. Let’s spend that conservation money better. Our crop insurance program encourages climate-unfriendly behavior and risky behavior. It can be fixed administratively or legislatively.

You also write about false solutions. Money and policy should not flow through your writings. Can you speak more about biogas and carbon offsets? Why are these not viable strategies?

Lehner: The idea behind offsets was that farmers could increase the carbon content of their soil and plants, and then sell a credit to a polluter of fossil fuels who wants to reduce their emissions. There’s both a technical fallacy and a policy fallacy in this. The technical fallacy is that it’s really hard to measure soil carbon in any way that it is administratively feasible and that will allow small farmers and farmers that have been traditionally excluded from farm programs to participate. And it’s often impermanenteven if you change farming practices to store soil carbon, youll release a lot of soil carbon as soon as you reverse those practices. There’s also the policy problem. We should encourage farmers to change their farming practices to reduce greenhouse gases, increase soil carbon, but it would be a grave societal problem if this allowed the fossil fuel polluters continue to pollute.

Rosenberg: Agricultural biogas is presented as an answer to a very real problem. Facilities that use wet manure management produce incredibly high levels of greenhouse gases. Biogas promises to cover these manure lagoons, which are emitting greenhouse gasses, and burn the gas for fuel. This narrative has several problems. One is that the data that industry shares generally don’t include leakage rates. And there’s been an increasing amount of research that demonstrates that leakage is generally higher than previously believed and cancels out any kind of positive climate effects.

Another problem is that the analyses that show strong climate benefits from biodigestion don’t take into account alternative systems. They simply compare the worst management system, an open manure lagoon, to covering that lagoon and creating biomass. Other systems, such as dry manure management or grazing, produce much lower levels of emissions than these biodigester plants. Even though biodigesters are less polluting than lagoons, they still pollute. No one wants to live near a CAFO, regardless of whether it has a biodigester. They’re often placed adjacent to poor communities, and there’s been a large number of spills and accidents that make living near these facilities intolerable and cause direct health problems. So the industry often portrays it as kind of this win-win, where we’re making the living conditions of the people in the community better while reducing emissions and giving farmers another avenue of financial support. However, it isn’t a win-win situation.

Rosenberg: The last major change in agricultural policy was during the New Deal, and since then we’ve kind of been keeping our policy together with these kludgy changes and just kind of working from the same frame that we’ve had for almost 90 years. And it doesn’t work. It’s going to have to change dramatically in response to climate change and other environmental problems, to our public health problems, and the fact that it’s negatively affecting rural communities. And one of the things that I’ve been really encouraged by in the last few years is how many policymakers seem to understand that we need dramatic changes. [Rep. Chellie] Pingree, [Sen. Cory] Booker they’re just examples of policymakers who are putting out really ambitious proposals. And I don’t necessarily expect those proposals to be passed this year. But it’s only a matter of time until agricultural policy gets another major transformation. And I’m optimistic that it’ll look more like their vision than the industrial vision that others might be putting forward.