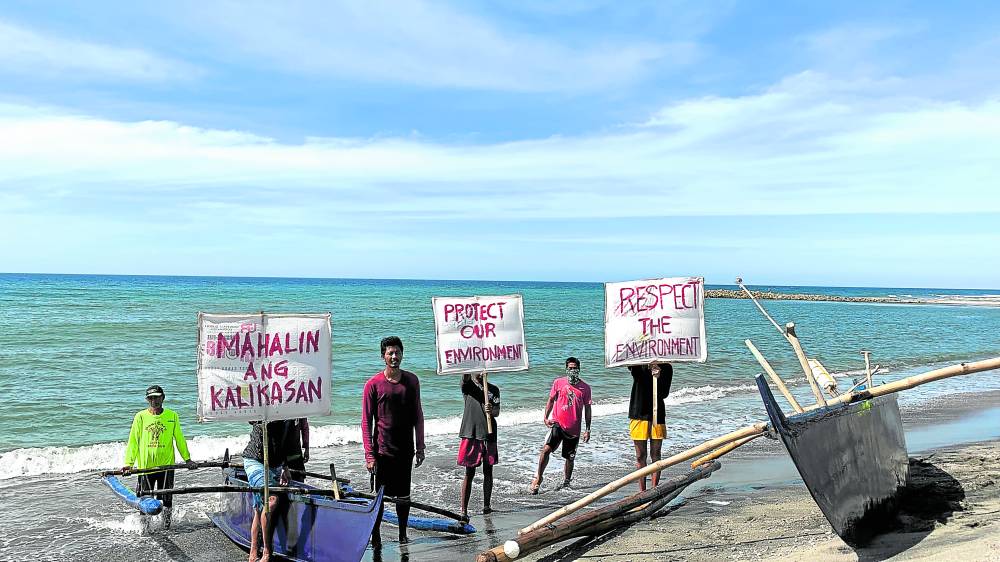 SEASIDE PROTEST Fishermen from San Narciso (Zambales) staged a protest along the town’s coastline on Thursday to oppose a causeway and jetty port project they believe is connected to off-shore mining, which will threaten local marine resources. JOANNA ROOSE AGLIBOT

SAN NARCISO & ZAMBALESOver 50 residents & members of environmental groups protested here on Thursday against the dredging activities carried out by a trading firm for the construction of a causeway along the towns shoreline.

Protesters claimed that the construction of a port in an area which would also include parts of San Felipe could be a prelude for black sand mining, calling it illegal and destructive.

Ricardo Reyes (president of Save Zambales Kalikasan Movement, (SZKM), stated that the town relies heavily on tourism, fishing, agriculture, and agriculture. This type of project will cause severe harm to our environment, as well as our source of livelihood.

Reyes said that the jetty port construction and causeway construction by AGN Trading, which is based in Pampanga province is one of five projects that will be constructed in the province to serve corporations that will transport lahar from Mt. Pinatubo to other parts the country and other Asian clients.

He stated that the San Felipe causeway project would reclaim an existing river and make it into a road network connecting to the river dike. The private jetty port planned for service trucks hauling lahar up Mt. Pinatubo.

Reyes stated that we will have no marine and forest resources in the end and that miners will be the ones to benefit from this change.

Since October, the Inquirer contacted San Narciso Mayor William Lim, San Felipe mayor Leo Farrales, and Allan Nuqui, AGN representative, to request their comments. However, they have yet not responded.

After a series of protests by residents, the Department of Environment and Natural Resources issued AGN a notice of violation in October. AGN was ordered to pay P50,000 in damages by the DENR for dredging the site in April for its jetty port. The DENR requires that projects that have significant or potential negative environmental effects be issued an environmental compliance certificate (ECC). AGN was denied a permit to drew at its jetty ports by officials of the Department of Public Works and Highways.

Wilson Trajeco, director of the Environmental Management Bureau of the DENR Central Luzon issued a separate ECC on Sept. 3 for the causeway project of AGN. He stated that the company had met all requirements for its ECC application.

The ECC was used to dredge activities along the western river basin at Mt. Pinatubo, in the downstream section of Sto. Tomas River, San Felipe. JOANNA ROOSE AGLIBOT

For feedback, complaints or inquiries, Get in touch with us.

Apple Delays Return to Office, But Commits To A More Flexible Environment

Trust is key to conserving Qatar’s environment, culture, and heritage