Nushrat, an AID worker from Bangladesh, only too well what it is like to work for them. climate changeCan cause loss of life and devastation to livelihoods.

“I have worked in the ­humanitarian sector for many years now and I have seen what happens after disasters,” said Chowdhury, who is Christian Aid’s climate justice advisor and lives in Dhaka.

“From 2007 and 2021 there have been ten cyclones in my country. It is a small country with only two cyclone seasons. The entire coast is at risk. It is projected that around 17% of land is at risk by 2050 due to sea level rise.”

She is travelling to Glasgow this week for the COP26 summit on ­climate change and, with others from the Global South, will be pushing for compensation for climate change loss and damage, along with funds for ­adaptation and mitigation.

“The countries which have been contributing to climate change need to compensate countries ­experiencing loss and damage,” said Chowdhury. “But when it comes to ­compensation, countries with global leaders are not very big fans. We are saying that if you don’t want to talk about ­compensation, talk about justice and solidarity. They must acknowledge loss and damage as a core climate justice position. There should also be support in terms f om loss and damage. Contributions should be based on historic emissions, ­solidarity and equity so that who needs the funds most will get them.”

Chowdhury (below), pointed out that the 2015 COP’s monetary commitments have not been kept, and that, contrary to some claims, countries in the Global South are investing in mitigation and adaptation as much as their funds will permit. 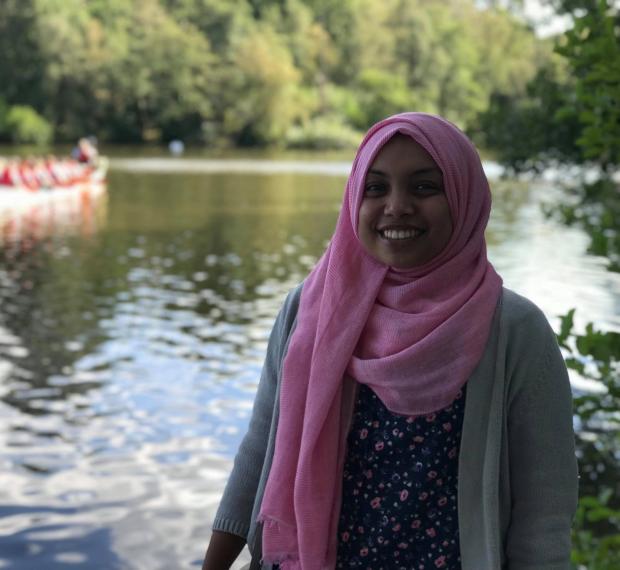 “Bangladesh has been investing in adaptation and disaster prevention for many years now,” she said. “Every year they spend 5-7% of the budget – around one billion US ­dollars – for adaptation only. Even after this ­investment we are going to lose 17% of the land.

“Many people are farmers and the sea level rises are already very ­difficult because, when the saline water comes, it becomes very hard to grow crops. Farmers and fishermen are moving to cities like Dhaka and ending up living in slums.”

The pandemic and cyclones that hit Bangladesh in the last 18-months have been devastating.

“We had one cyclone last year and one this year, so on top of the ­pandemic it was a double ­whammy,” said Chowdhury. “People were ­already without work because of the lockdown and, when the cyclones happened, many lost everything.”

The Government was now ­“trying very hard” to vaccinate the ­population.

“People are eager to get ­vaccinated because it is a very populous ­country and if one person is affected the whole family becomes ill, so they ­understand the importance very well,” she said.

Chowdhury recognizes that not only countries in South Asia are affected by climate change but points out that richer countries have the financial resources to help mitigate the crisis.

“The Global South does not have the capacity to respond and this is the difference,” she said. “At COP26 we are expecting intense discussion from a justice perspective. It is not like they are giving the global south help or support – this is due.”

As Christian Aid’s policy adviser, Chowdhury aims to raise ­awareness about climate justice and give the unheard a voice. Christian Aid has worked in her country since 1972, ­following the Liberation War. The charity works in the most vulnerable districts on disaster risk ­management, climate change, resilient ­livelihoods, emergency preparedness and ­response, inclusive market development, gender and social equity.

The programme aims to create lasting and deep change in economically and socially marginalized communities, including those of Dalit and ethnic-minority backgrounds and single women living in extremely climate-vulnerable regions. The programme’s goal is to empower communities to participate in crucial decisions that affect their lives, to help them build their resources and to be able to take advantage of opportunities and to avoid poverty.

Chowdhury will take part in an event at Glasgow Film Theatre during COP26 on vulnerable communities on the frontline of climate change.