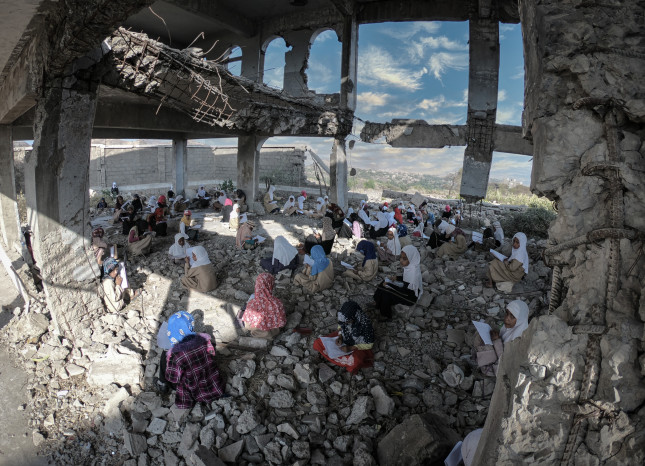 ​“In a changing world with galloping, growing needs, we can’t keep making the same efforts, issuing the same pleas, and just write bigger and bigger checks and expect different results,” said Samantha Power, Administrator The United Agency for International Development (USAID), at the launch of the Global Humanitarian OverviewThe Center for Strategic and International Studies, USAID and the UN Office for the Coordination of Humanitarian Affairs hosted the event. “We must change the ways we deliver humanitarian assistance to include full participation, design, and leadership from local populations and organizations, from women and marginalized peoples who can help develop truly sustainable solutions to the risks they face in their own communities,” said Power.

If all people requiring urgent humanitarian assistance lived in the same country, it would be the fourth largest in the world, said Martin Griffiths, UNOCHA’s Under-Secretary-General for Humanitarian Affairs and Emergency Relief Coordinator.

More than one percent of the world’s population is displaced, food insecurity is at unprecedented levels, there are more frequent complex emergencies and climate change is looming over it all, exacerbating losses and undoing gains, said Power. More funding is “urgently needed to chip away at the gap between donor commitments and this range of acute needs,” said Power, but we also need to shift our approach in ways that “go beyond the need for more resources.”

“Perhaps nowhere is this more true than in fragile and conflict-affected areas. It can be easy to forget that pandemics and natural catastrophes are not the main source of humanitarian assistance in today’s world. It is from conflict,” said Power.

In many of the world’s conflicts, from Yemen, Syria, and Somalia, to coups in Burma, the fall of Afghanistan to the Taliban, and the “sprawling human catastrophe in Ethiopia,” the governments are simply failing to meet the needs of their people. “The answer to these conflicts is political,” said Power. “And this is why it is so important that the United States and other countries pursue what President Biden terms relentless diplomacy. We need to find a way to use diplomatic negotiation—regionally, at the UN level, and in terms of our bilateral relations, in coming together as allies—to try to bring the parties together to bring conflicts to an end.”

Right now, the burden of dealing with the fallout of these conflicts “falls unfairly and almost exclusively to humanitarian organizations,” said Power. But humanitarian actors can’t be the sole responders, she said. “When governments actively marginalize communities or block aid from reaching its intended recipients, we need multilateral organizations and regional and multilateral development banks to step forward to help reach people most in need in ways that don’t legitimize bad actors or support morally bankrupt regimes.”

This will require a reevaluation of not only where we work but also with whom we work. Multilateral development institutions often believe that aid to conflict zones can only be provided through state systems. Power said that partnerships must be strengthened with local actors as well as international institutions or faith-based and community-based organizations.

A central piece of localizing humanitarian assistance is ensuring women have a seat at the table, said Sarah Charles, Assistant to the Administrator at USAID’s Bureau for Humanitarian Assistance. Claudia Herrera (Executive Secretary at CEPREDENAC) stated that women are the first victims of crisis. These rights include access restrictions, maternal mortality and gender-based violence. Women are also first responders. “When disaster strikes or violence breaks out and communities face intense pressure to find safe harbor, it is often women who lead efforts to identify those most in need and women who direct resources most effectively,” said Power.

This is more so than ever in the context the climate crisis. Women make up the majority of the agricultural workforce in Yemen, for instance. But with lack of access to knowledge and resources to adapt, climate-related disasters threaten women’s lives and livelihoods, said Antelak Al-Mutawakel, Co-Founder of the Youth Leadership Development Foundation (YLDF). YLDF is leading a pilot project to create spaces for female entrepreneurs and managers in small women-led businesses. This will facilitate information dissemination, support networks, and ultimately build resilience.

Climate Change: Burnaby is the latest city to sign a treaty to reduce dependence on fossil fuels

Gender mainstreaming in humanitarian programming can be vital to counter the gendered threats of conflict and climate disruption. Natalia Kanem (Executive Director of United Nations Population Fund) stated that the politics of peace is based on women securing economic empowerment and bodily autonomy as well as decision-making power. “This takes money. It requires solidarity. It takes concrete climate action. And it takes the politics that lead to a more durable peace.”

Sources: United Nations Office for the Coordination of Humanitarian Affairs.

On Alaska’s Glaciers, Life Is Harsh—and So Is the Reality of Climate Change | The Brink