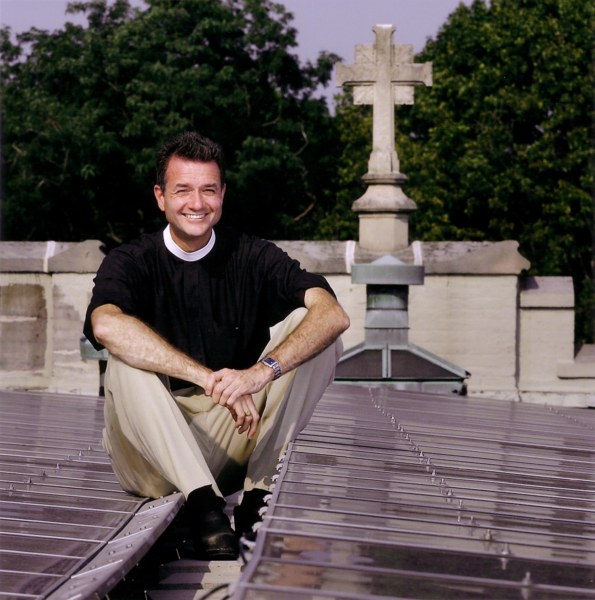 [Episcopal News Service] The Rev. Fletcher HarperHe was in grade school when he first got involved in environmental projects. Now 58, he’s the executive director of GreenFaithThe organization has grown to be an international, community-led climate, and environmental movement under his leadership. Harper’s sense of climate urgency and his desire to share that are palpable. Talking about climate change, it’s as if he can’t find enough words to convey humanity’s collective, dire danger. “Climate change is about the suffering of people who are innocent of creating the problem. In parts of the world that are less materially wealthy, the impacts are absolutely devastating,” he recently told Episcopal News Service.

Harper first realized the connection between religions and environmentalism during his time as a parish priest, and later volunteering for GreenFaith. When the group asked him to become executive director in 2002, Harper felt “a Really powerful experience of a calling within a calling,” he said. “I felt a calling to be a priest, but then this felt like a real, strong, clear refinement of what that was about.”

Harper, who has been active in New Jersey Episcopal parish ministry for a decade, has led GreenFaith over the past 20 years. He views GreenFaith’s response to climate change from a religious, multi-faith perspective. The organization has expanded its reach from national to international. It organizes at the grassroots level through trainings, awareness-raising events, and other activities (such as COP26 ahead) and by creating new initiatives such as Shine, which supports renewable energy access projects for communities in India or Africa. Author of the book GreenFaithHe wrote in a September piece in SojournersHarper advocated that clergy should preach strongly and directly for climate change action, even if this feels uncomfortable. GreenFaith, which is a religious organization, will continue to promote awareness of climate change in faith communities. It will also encourage religious people and groups to get rid of fossil fuel investments. Allowing climate change to happen is “just wrong,” Harper said. “What climate change is about is an unwillingness to be human in the middle of a global community.”

The rest of ENS’ interview with Harper has been condensed and edited into the Q&A below.

ENS: What is the catalyst for climate change in your professional and religious life.

Harper:As a parish priest, my activism in social justice initiatives at both the parish and community level was a constant. I found out about GreenFaith’s predecessor organization when it was getting started and got involved on a volunteer basis. Climate change is a spiritual issue for me on two levels. The natural world is, in my opinion, the most sacred thing. Thea place where they can meet God or encounter something that they consider holy. Also, the forces responsible for the lion’s share of the destruction of the planet are massive corporations, extractive industries and governments. These injustices are not only for the environment, but also for poverty and all other major social issues. This is why social justice is important.

ENS: I’ve had the sense that GreenFaith is growing. Is this true?

Harper: Yes. In the last three or four years we’ve brought on board staff members in France, Germany and Kenya. This coming year we’re going to hire staff in Indonesia, Japan and the United States. Part of what accounts for our continued growth is we’re unequivocal that religious groups have to step up way more to meet the fact that we’re facing an absolute emergency. We share a lot with civil disobedience movements such as the civil rights movement, which has seen us grow in recent years. [in the U.S.] and Gandhi’s movement to liberate India from British colonial rule. The status quo was maintained by powerful vested interests. Polite conversation and occasional references to the Bible weren’t going to end the system. It was going take people confronting the centers of power and calling them out in a way that many religious people are uncomfortable with. Our growth is because we’re willing to do that [and]Millennials are fed up with inept responses to these issues, even from organized religion.

ENS: GreenFaith participates in global initiatives, while also providing advice to local clergy leaders. Could you speak about this two-pronged approach.

Harper:Everywhere you look in this world, there are people. [most of]The climate is being destroyed [of]Companies that deal in coal, oil, and gas, as well as industrial agriculture. They can control government and regulatory processes anywhere. This dynamic is global, and the challenges at the local level are the exact same. In a number of places, it’s hard to name Chase Bank, BlackRock, Vanguard, Fidelity, Citibank or Barclays because [of] people’s jobs. People’s sense of identity is tied up with those institutions. And in some places, a lot of places, it’s actually really dangerous. We had volunteer activists in East Africa who obtained all the permits necessary to peacefully protest the East Africa Crude Oil pipeline. But they were stopped by police, who were performing the government’s bidding. It takes courage to address these issues in these parts. In places like the United States, in wealthier communities, it takes guts for clergy to speak up because a lot of their parishioners don’t want to hear it. [Yet] we’ve found that when you say this stuff directly, a lot of people welcome it because they get the dynamics at play and they’re looking for moral leadership.

ENS: On Belief in the State last month, you said that the pope has gotten very specific in his demands and that it’s crucial for senior religious leaders to do so. Why is this important?

Harper:Because specificity is what creates change. Every social change expert says it’s the only way you get change at a broad level: by choosing specific targets and doing specific things. We need specific companies—in the fossil fuel industry and industrial agriculture—to go into a managed decline because their business models are destroying the planet. This must be stated clearly. We need them to accept that reality. It is up to their shareholders and governments that they accept it. So naming that specifically is the only way you’re going to provoke real conversation. Pope [Francis] is admirable for his willingness to do that. Until [other] senior religious leaders do, they won’t matter much in terms of this work. The only way that a status quo gets changed is through moral discomfort; they’ve got to be willing to be instruments of moral discomfort.

Harper:This COP was crucial because the Paris Agreement included a mechanism that required countries to increase their ambition in climate change efforts every five years. This was the first COP at which there was a expectation that countries would return to the table and set higher ambitions. Ultimately, what the COP process ought to get measured by is, ‘What are those commitments and how well are countries doing keeping them?’ And the answer is, ‘The commitments remain very far away from where they need to stabilize the climate,’ and countries are generally not keeping their commitments.

Cop26: US must ‘deliver to get credit’ on climate crisis, says Ocasio-Cortez- day eight live | Environment

ENS: I was told that you will call on wealthy households worldwide to adopt climate-friendly lifestyles. Tell me more.

Harper:We need systemic changes as quickly as possible [possible]. We also need wealthy and middle-income households worldwide to dramatically reduce their carbon emissions. Our three biggest contributors to our personal carbon emissions are our diet, specifically our consumption of meat and transport, especially our use of motor vehicles and flying, as well as the energy we use in our homes. We’ll be calling on people of diverse religious backgrounds, as a matter of their religious values, to make changes in those areas. We’ll have a particular time for that during January, to take that on as a New Year’s commitment.

Harper:There is a growing movement that is more involved and I believe we play a key role in that. I’m more concerned about [religious moderates]It is a belief that religious institutions exist to provide comfort and help people deal with their own tragedies and challenges, without addressing larger social issues. The religious right, I couldn’t disagree with their positions more. They earned it methodologically. They organized at the grassroots level. We’re starting to see that greater level of grassroots involvement by progressive and even some moderate religious communities. This needs to be accelerated as well as grown as quickly as possible.

ENS: What would you like to say about the climate movement and the pandemic?

Harper: While much of the world’s economy was forced into a slowdown over an extended period of months, carbon emissions did not appreciably decrease. This highlights the need for systemic changes. Food and energy systems [should be] creating energy and healthy food without destroying the planet—we need to accelerate change because even in a pandemic they don’t slow down enough to solve the problem. We learned from the pandemic that if we need to, we can make significant changes. Because we had a scientifically based view that we were facing a serious threat, civil society norms were changed on a large scale. In relation to climate changes, it is important to remember this. [that]Rapid change is possible, but it is not impossible. Accepting and believing that there is a real threat to our existence and that we must change together is a prerequisite for that change.

– Heather Beasley Doyle is a freelance journalist, writer and editor based in Massachusetts.