“Your generation got us in this mess”: For one family, the fossil fuel industry’s role in stoking the climate emergency is more than just a subject for dinner table debate. It’s their legacy. 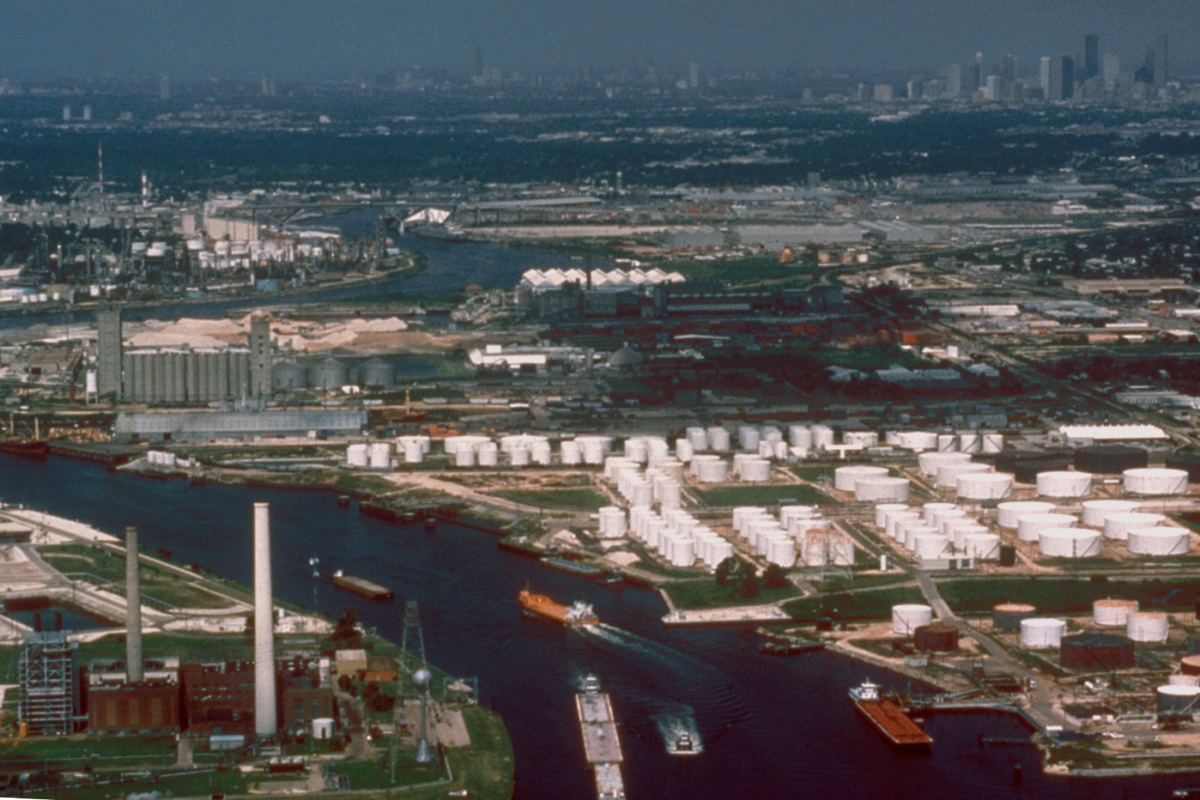 Looking west along Houston Ship Channel near Galena Park, with Houston beyond. US Army Corps of Engineers via Wikimedia Commons

This story first appeared in The GuardianIt is part of Climate Coverage NowA global journalism collaboration that strengthens coverage of the climate story.

What do you do if your family has strong ties to the oil industry and all agree that fossil fuels are accelerating the climate crisis.

For one family, the fossil fuel industry’s role in stoking the climate emergency is more than just a dinner table debate. It’s their legacy. Andy and Wendy met in 1970 while working as engineers for Exxon. They worked in oil and gas for decades while raising their children.

Andy and Wendy, now retired, drove from their Washington home to spend the holidays together with their son James and their daughter Liz. Liz has two young boys with her husband Dara. The Guardian spoke with the family the day before Thanksgiving to discuss their views on the climate crisis and how they view fossil fuels.

Andy and Wendy met while working at Mobil.

Andy: We were creating synthetic fuels back then. We were trying to solve the energy crisis by creating new types of fuels. In that group, Wendy and me met. After Exxon’s merger, they moved us all from New Jersey to Texas. A large number of us made that move. This creates certain bonds.

Did global warming make it into the conversation of that group?

In 2004, we bought a Prius and drove it to Exxon every single day. All of our coworkers had this whole conversation about driving a Prius.

Andy: My colleagues were giving me the eyeball. They just didn’t understand why anyone would ever do such a thing.

Liz and James, can you recall when you first learned about the work of your parents?

Liz: There were many Bring Your Kids to Work Day events in the 90s. So I used to accompany my dad to work at Mobil. But it wasn’t until high school that I really understood what the oil and gas industry is and how it impacts people.

James: It was a result of us moving around. We had to move a few times because of Exxon Mobil’s merger. This was so people could ask me, “Oh, are your parents in military service?” And I had to say, no, they’re oil and gas.

Did you guys feel uncomfortable telling people about your parents’ work in fossil fuels when you were younger?

Liz: I don’t remember feeling a sense of shame then. When I was in college, I felt a strong pull to pursue a career that could reverse the effects climate change. I studied environmental science at Washington University. It was in college that I discovered how Exxon knew for so long about climate change, and had covered it up. I felt strongly that I don’t want to purchase Exxon gas.

James: I was in highschool at the time of the BP oil spillage, the Deepwater Horizon. Being in Bellingham, which has such a liberal area, a lot my peers were upset about it. It was very upsetting for me. My mom worked for BP at the same moment.

[To Wendy]You wanted to defend the company. There were many words spoken: this could have happened, there was a significant risk in the Gulf at that time, and many companies were cutting corners. You still have to hold people accountable for the choices they make.

Liz: The incident deeply disturbed me, more than anyone else in my family. The fact that people continue to fuel their cars with gas every single day is what really irritated me. And maybe they’re boycotting BP gas, but by continuing to consume, people are contributing to the problem. And so there’s this awful hypocrisy in that after each of these incidents. We can all play the blame game and yet there hasn’t been any shift away from consuming gasoline and diesel.

Andy: I wouldn’t say there’s not been any shift.

Andy: It’s right, but not fast enough to get us where we want.

Wendy, you were working for BP at the time of the spillage. Could you talk a bit about that?

Wendy: It really affected my life. It was both the environmental and safety aspects. However, it also affected me in terms of the loss or injury to colleagues. I mean, I started to tear up listening to the children talk about it right now.

It was a complete moral reckoning. It was obvious that the fossil fuel industry is wrong at so many levels. I realized I was lost. I started with synthetic fuels, and eventually moved to conventional oil and gasoline.

I was already so far ahead of the industry at that point. I had two kids in college, so I asked myself ‘what can I do within this industry to do something impactful and valuable?’ That’s why I accepted a safety project in Alaska.

Is that this our final probability to behave on the local weather disaster? | Cop26

What is the family’s conversation about fossil fuels at the dinner table?

Dara: Dara, I like the conversations we have with Andy & Wendy. I think they are held accountable. Your generation, you guys got me in this mess and they are openly admitting it. I mean, I don’t think you guys disagree.

Liz: I can remember the first time I selected my own electricity provider. It was a 100% renewable option, and I was so excited. The first thing I did was call my dad and say, Dad, tell me you’re purchasing 100% renewable power. A year later, we planted a garden and I bought an enormous composting bin for our back yard. Calling Dad, “hey Dad, you guys composting?”

Liz, it’s hard to imagine you came to this career in environmental protection accidentally, that it’s unconnected from your parents’ career choices.

Liz: When I was in college, I knew that I wanted the opposite. [of my parents]. I wanted to do everything I could to stop climate change. And I spent the first 11 years of my career working in the oil and gas industry and in the environment, health and safety field, and there’s a lot of opportunities to talk about sustainability within that framework.

But my personal experience is, you can be as loud as you want but unless you have buy-in from the top, it’s not going to happen. Many energy companies see environmental social governance reporting as a way to pacify shareholders, but not drive real change.

Andy and Wendy, did you hear Liz tell you that she wanted to do something completely different from what you had done career-wise?

Andy: Liz, it’s easy to feel her passion. She pushes us. And that’s a positive influence. We’re feeling the push. That’s our way of saying we’re not stuck in the blame game. That’s very complicated. But no matter what, that’s all in the past.

Your children are three and five years old, Liz and Dara. How has the arrival this new generation changed things?

Wendy: When we sit down to Thanksgiving dinner, we’re having stuffed acorn squash, the vegan version. Our plant-based eating is heavily influenced by the climate. So, you know, we’ll have that conversation with the boys around why there’s not a turkey on the table.

Dara: I think Liz, and I, disagree a bit. I have a lot of questions about why this happened when I do night-time stories on climate change with the five year-old. Who did it? I don’t know if it’s necessarily healthy for him to know all of that information. And sometimes I don’t even have the answers.

Emma PatteeShe is a writer, journalist, and native Oregonian. She writes about eco distress, climate reality, West Coast climate news, and other topics for the New York Times (Washington Post), Guardian, and other publications.

Are you thinking climate change is chaotic? Meet solar geoengineering