At 23 years old, Mitzy Violeta Cortés Guzmán is part of a network that drives environmental action and seeks to change the narrative around the climate crisis from the perspective of Indigenous peoples.

The 2022 winner Global Citizen Prize: Citizen Award Mexico, Mitzy is Mixtec, from San Sebastián Tecomaxtlahuaca, Oaxaca, and she grew up surrounded by nature. Her community was intimately connected to the river, the lagoon and the mountains. This gave her early lessons about protecting the land.

Mitzy was raised in a community with no hierarchies and a deep respect of nature. Mitzy realized, after her first year in the university system that formal academic spaces rarely consider Indigenous wisdom as part of the solution for the climate crisis.

So she raised her voice — to resist and also to prove the inherited knowledge of her people was not only valid, but also a crucial “living solution” to protect the earth.

Mitzy’s activism arose from her experience of oppression, inequalities and violence against Indigenous communities, particularly women and their language.

Red Futuros Indígenas is a network of resistance that, through workshops, meetings, and communication campaigns, has among its main objectives the dissemination of narratives about ancestral knowledge, language, and practices; the defense of water and territory; resistance to extractivism; and the sharing of ancestral food recipes. 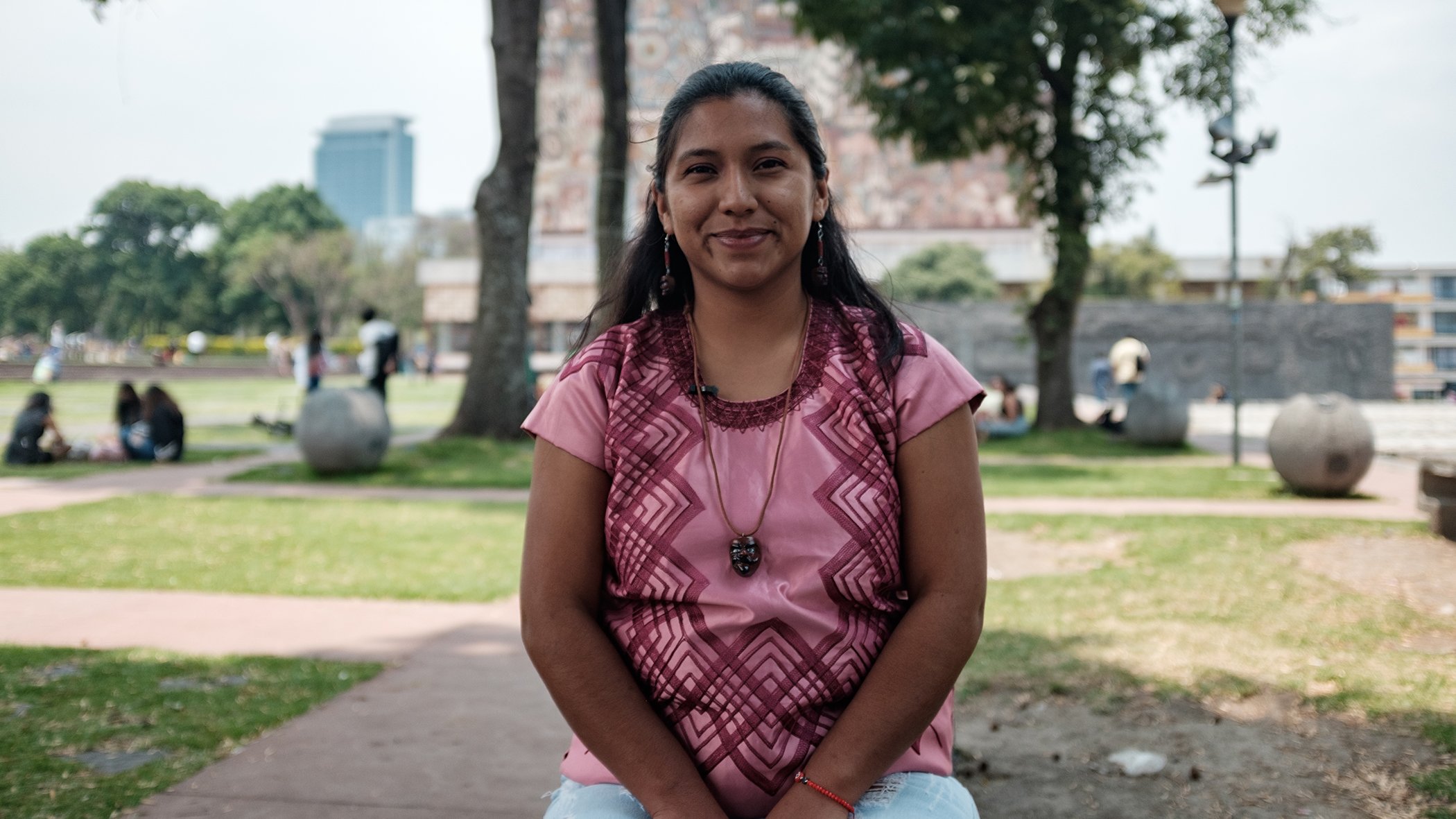 “We do not propose to go back to the past,” reads the organization’s manifesto. “We do not romanticize precariousness. We don’t deny the existence of anyone. We do not apologize. We demand that we take responsibility for stopping this extermination machine. We know that the climate crisis is a result of the current systems of structural inequality in the world.

It concludes that there is enough water, food and land for all living things to live dignity in this territory of Mexico, in this shared home called Earth. We can regenerate the systems that support our future. But we must change at the root. We want to return the earth to its normal state after every crisis. In times of climate crises, the future is a territory we must defend.”

Mitzy wants to see more people involved in protecting the Earth and ensure that the fight against climate change is focused on its structural causes from an intersectional perspective.

“We believe that the healing of the land is the defense of life and territory,” she told Global Citizen. “In the face of this emergency, we see the need to name the crisis from our languages and cosmic worldviews, to dialogue with our communities, but also to make visible the responsibility that we all have to sow other futures and to name those who are responsible for the crisis.”

This year’s Global Citizen PrizeIt is being recognized in three categories: to Defend The Planet, to Defeat Poverty and Demand Equity. With a focus on climate change and empowering adolescent girl, and breaking down the systemic barriers that keep people in poverty,

As a Global Citizen Prize: Citizen Award winner, Mitzy will receive a year-long program of support from Global Citizen, as well as a donation to Red Futuros Indígenas.

We spoke with her about her activism, the many challenges climate activists in Latin America face and what she hopes for. 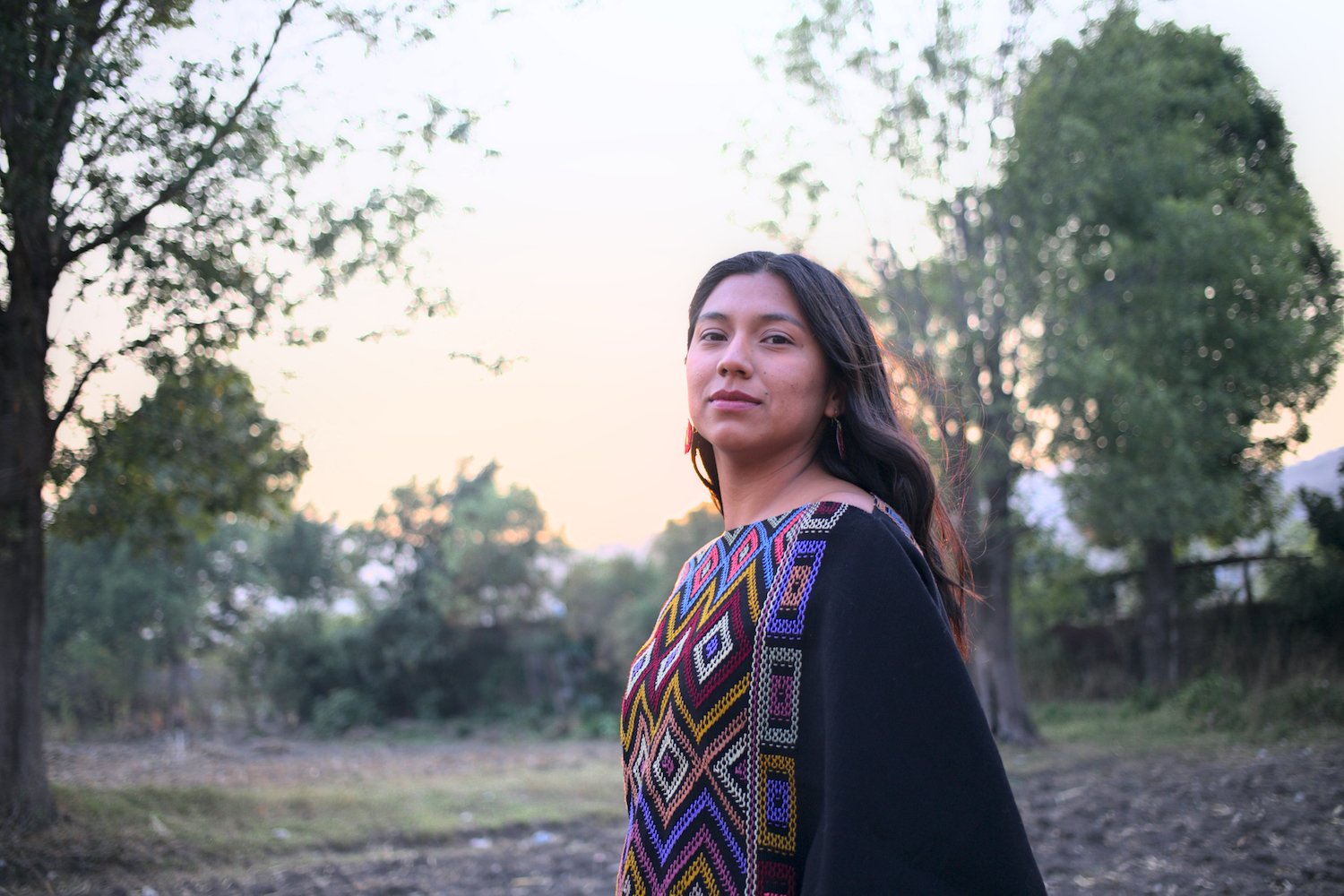 Mitzy was part COP26 in denouncing what was happening on her territory.
Image: Gibran Mena Aguilar

Global Citizen: How was the idea of the Red Futuros Indígenas born?

Mitzy Cortés: We are a network that includes more than 20 collectives from different Indigenous peoples of Mexico. Our collectives are committed to the defense and understanding of the territory. This includes actions such as the recovery of language, knowledge and community communication, as well resistance processes against megaprojects like mining, energy projects, monoculture, and other megaprojects.

In our work, we feel the need to form a network narrative resistance to position that defense of the territory is an alternative to the climate crisis that currently affects the entire globe.

In times of ecocide and genocide, we argue that the future is a territory to defend where other stories have to be told — stories that denounce the violence against Indigenous peoples, feminized bodies, and nature, but also sow hope that other worlds are possible.

What is your collective vision and how long have you been with the company?

We have been working together for just over a year. We have conducted communication campaigns in five areas: energy and cities, defense of territory and water, and food. [This is]In addition to joint actions with youth fighting climate justice, Fridays For Future MAPA and Legaia are also available.

Our goal is to deconstruct the climate crisis narrative and show that it’s a symptom of a larger illness. It is we, the people who fight this disease by protecting our languages, building together, and protecting the territory against extractivism.

Could you give us some examples of positive results from moments or projects you have worked on?

We formed the Defensoras de la Tierra network from youth and other members of the network to attend the United Nations Conference on Climate Change. [COP26 in Glasgow]We came together to protest the injustices in our territory and to join other struggles for a profound change of meaning, where money doesn’t have to be the most important thing. We were 10 women defenders working together with other youth groups to create and implement the Initiative.

We were also part of the CURA DA TERRA Global Indigenous Woman’s Gathering while we were in Glasgow.

We believe that the defense of territory and life is essential to the healing of the land. We recognize the urgency of this crisis and feel the need for dialogue with our communities and to name those responsible.

How can development agencies be successful in a multicrisis world of multiple crises?

What are some of your current projects?

We are currently working internally to strengthen communication and security actions for members of the network. My community has communal property authorities that are responsible for taking care of common goods like water and forests.

How is the organization structured

Each collective has the right to vote and participate in decisions made in an assembly. We start with the fact we are a collective movement seeking to strengthen the processes for territorial defense and its discussion with the current crisis in climate.

Latin America is a dangerous area for activism in terms of security. Are you familiar with situations or challenges that put you in danger? How did you manage to keep your job going despite these challenges?

We consider ourselves to be defenders of territory who fight [alongside]Our communities and other organizations. Most of us live in communities where the organization has helped us overcome various problems. With the emergence of extractive projects in our communities, violence, division and the violation of human rights of community members is on the rise. Faced with this reality, we fight against the state, companies, organized crime in communities where there is not much media attention and where defenders are easily intimidated or murdered without any justice or protection.

There are many women who have been victim to intimidation and had to flee their homes, as they were the ones who decried. [extractive projects]Respect community decisions and work for it. However, we have discovered that we can also create our own communication networks as well as regional articulations to be more responsive and have a greater echo. We are a group of organizations. [speak up] to denounce [these projects]Let them know that they are not the only ones.

What obstacles are you still facing in your journey? And what can you do to conquer them?

In recent years, violence against Indigenous peoples in Mexico has increased in order to appropriate our territories, our knowledge, and try to put an end to our organization, because they don’t want to find any type of resistance.

Despite the fact that we are responsible for conserving 80% of the planet’s biodiversity, the colonization of our peoples continues. We need our stories to be heard, to share our horror stories, to discuss the consequences of violence on our territories, and to respect our freedom to choose our territories.

We must be seen as living solutions to the climate crisis. We need them understanding that there could be other spaces, and other ways to relate with nature. There are still ways to live with others, even if you don’t place one person above another.

On May 22, all eight Global Citizen Prize winners — including Mitzy and Her fellow Citizen Award winners around the globe, as well as this year’s Global Citizen Prize: Cisco Youth Leadership Award winner, Nidhi Pant — will be celebrated at an awards ceremony and intimate gala dinner event taking place at New York City’s Gotham Hall.

The event will recognize the winners’ extraordinary work, with an exclusive stream of the Global Citizen Prize event airing on YouTube and Twitter on June 2, at 12 p.m. ET.

You can also learn more about Mitzy’s efforts to protect the planet. Here.