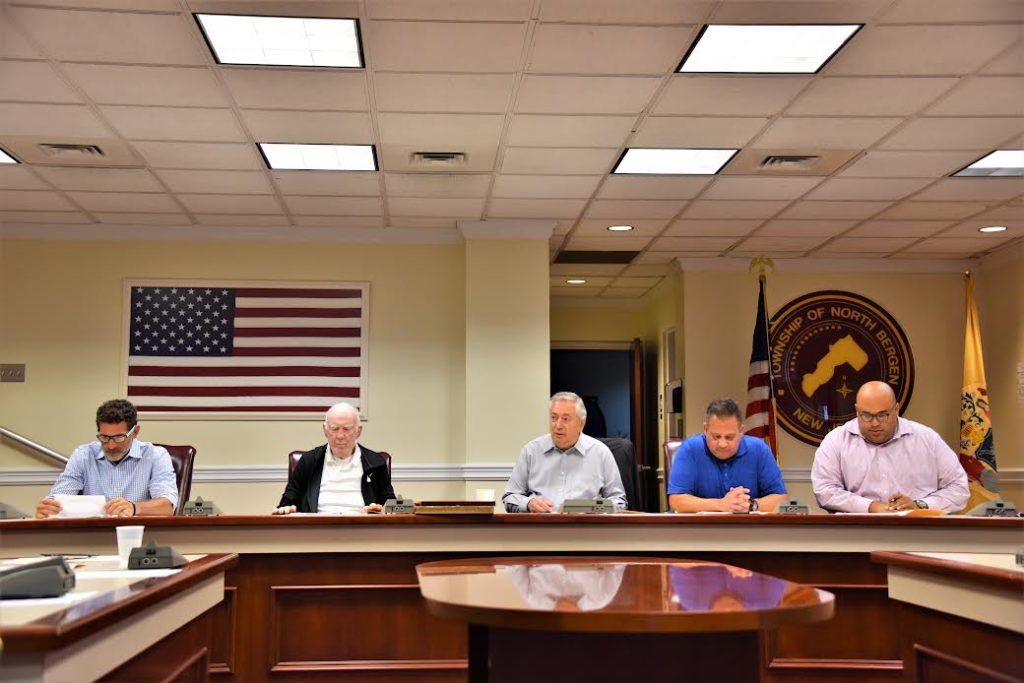 The North Bergen Board of Commissioners meets at Town Hall. Photo by Art Schwartz

The North Bergen Board of Commissioners meet in person at Town Hall. Photo by Art Schwartz

The North Bergen Board of Commissioners have introduced an ordinance to form a Green Environmental Advisory Committee.

The committee is going to consist of those who currently sit on the Senior Citizen and Disabled Persons Condominium Cooperative Conversion Protection Board.

That board is still in existence, but it never meets,” Kobin said.

The board now meets only when necessary, rather than monthly, due to a lack of an agenda. Members are paid based upon attendance to address quorum matters, following ordinances adopted last year by the Board of Commissioners.

The number of members will be nine, which is the exact number for the Senior Citizen and Disabled Persons Condominium Condominium Cooperative Conversion Safety Board.

The members would serve a one-year term,” Kobin said. “The mayor appoints them with the advice and consent of the Board of Commissioners.”

A secretary for the same term would be also appointed.

The committee’s purpose is to investigate new green initiatives that could be applied to North Bergen.

“Theyre going to investigate and evaluate and sort of ferret out any kind of green or environmental ideas, initiatives, programs and anything like that,” Kobin said.

However, the committee is purely advisory in nature, he added: “They cant take any action. They cannot sign contracts. Its all advisory… It will coordinate with Janet and they can make recommendations to the mayor and the Board of Commissioners.”

Kobin stated that the committee will be paid the same amount as other boards like the Traffic Advisory Board and the Rent Leveling Board. The committee is not going to be subject the Open Public Meetings Act.

Mayor Nicholas Sacco asked if Hailey Benson of NB Earth Talks, an environmental advocate who frequents commissioners meetings, would be on the committee, to which Kobin and Township Administrator Janet Castro responded that she wouldn’t be since the committee would be made up of those on the Senior Citizen and Disabled Persons Condominium Cooperative Conversion Protection Board. They suggested that she could be appointed to the committee as a community liaison.

Kobin suggested Tom Stampe as a possible member of the committee. Stampe currently serves on the Senior Citizen and Disabled Persons Condominium Condominium Cooperative Protection Board. He would be a good choice to join the new committee.

Kobin said that Tom Stampe would be a great person to join the committee. Hes on the co-op board, so he would come over.”

Castro said that we already had a board and that we wanted it to roll over. Tom Stampe is a valuable resource when it comes to green issues.

Kobin stated that the board will likely make appointments for the committee at its next meeting. The next North Bergen Board of Commissioners Meeting is February 8th at 8 pm in the municipal chambers at Town Hall located at 4233 Kennedy Boulevard. Go to northbergen.orgClick on the event to be added to the calendar.

Gene-environment interactions are what drive aut