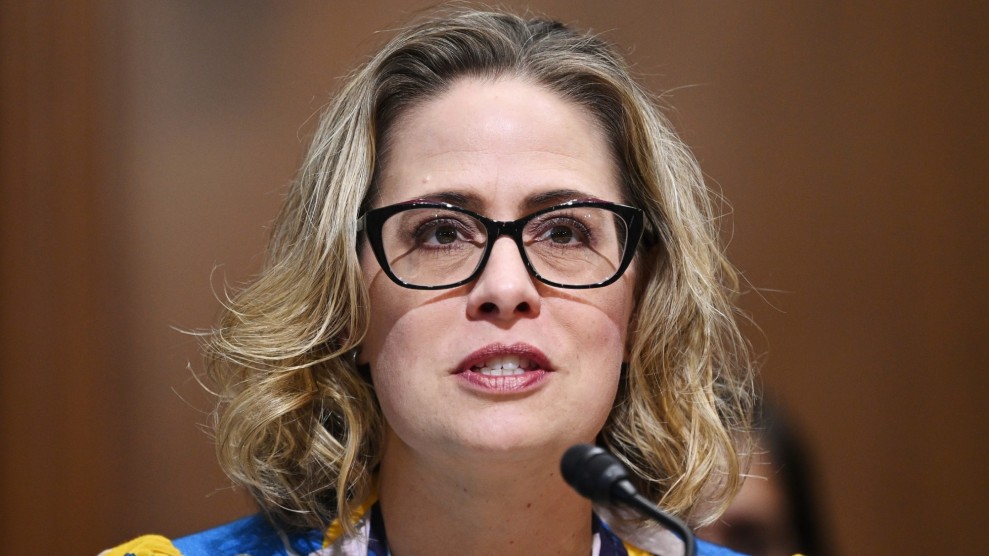 This story was first published in the Guardian This is part of the Climate Desk collaboration.

Wildfires can cause deadly heat drought and flooding show how climate change has “already arrived” in Arizona and action is desperately needed, according to climate and progressive advocates who helped elect Kyrsten Sinema to represent the state in the Senate.

Many of them are wondering why their senator seems to have “turned her back” on her background in environmental politics and is now blocking Democrats’ multitrillion-dollar legislation to address climate change. “The climate crisis is here—it has already arrived in Arizona,” said Vianey Olivarria, a director of Chispa Arizona, the state branch of the League of Conservation Voters, which had endorsed Sinema for senator. “We don’t have a lot of time to waste.”

Sinema is one of two centrist senators—with Joe Manchin of West Virginia—who have opposed the Biden administration’s $3.5 trillion budget bill that contains the bulk of the Democrats’ climate change agenda.

This summer, the earth in parts of Arizona cracked—desiccated by decades of megadrought. Some communities were also flooded. This year, half a million acres were destroyed by wildfires. And a prolonged, record-breaking heatwave—supercharged by human-caused climate change—killed dozens in Phoenix and surrounding suburbs.

Sinema was at the White House this week for private talks with Joe Biden about the legislation. It would need the support of all 50 Democratic senators in order to pass. It would reduce greenhouse gas emissions dramatically, increase renewable energy and fund climate resilience programs.

“She promised to fight for climate change and invest in our communities,” says one climate advocate. “I think a lot of us are fed up.”

Sinema’s office has emphatically contested New York Times reportingSinema demanded $100billion in cuts for climate programs earlier in the month. She has not spoken out about her position, and her obstruction to the reconciliation package overall has confused progressive voters and angered climate activists in her home State.

Sinema was actually the leader of the Arizona Green party when she began her political career. Over the years, her politics shifted and she positioned herself as a moderate Democrat willing and able to work with Republicans that dominated state politics—but even then, she said she modeled herself after the late John McCain, the Republican senator of Arizona who pushed for bipartisan climate action throughout his career.

“When Senator Sinema ran for office, she promised to fight for climate change and invest in our communities,” said Casey Clowes, an organizer with the Sunrise Movement in Tempe, Arizona. In 2018, Clowes said she voted for Sinema, and volunteered for more than 250 hours to help send Sinema—the first Arizona Democrat in 30 years—to the Senate. “Now she’s been unaccountable and inaccessible,” Clowes said. “I think a lot of us are fed up.”

A group of veterans will be advising Sinema on Thursday resigned, and accused her of hanging her constituents “out to dry.”

Unlike Manchin, Sinema has not publicly voiced her concerns with the reconciliation bill—aside from rejecting its overall price tag.

Manchin, a conservative Democrat, has received more political donations from the oil-and-gas industry than any other senator. He has stated that he opposes provisions that would reduce planet-heating emissions. But Sinema—who has become infamous for evading questions from constituents and journalists—recently told the Arizona Republic that she had “an interest in policies addressing climate change”, without offering much detail on which policies she was interested in. The senator has resisted raises to individual income and corporate tax rates to fund climate change and social safety net programs but hasn’t made clear what alternative funding schemes she would support.

“Since she’s been in office, it’s been nearly impossible for community members to connect with her,” said Columba Sainz, a consultant with Moms Clean Air Force in Arizona. “We don’t know whether Sinema will protect us.”

Excessive heat killed at least 500 Arizonans in 2020—and public health officials consider that an undercount.

Sainz, whose youngest daughter has wheezing episodes and respiratory problems triggered by poor air quality, said: “In my family, heat is our enemy. It interacts with stagnant air to create and trap ozone pollution.” She works with other families who cannot afford air conditioning during punishing heatwaves. Public health experts believe that the state has recorded more than 500 heat-related deaths in 2020. Officials in Maricopa alone have recorded at least 113 heat related deaths this year.

“We need funding for adapting to climate change,“ said Gregg Garfin, a climatologist at the University of Arizona. Flagstaff and Phoenix, among others, have made climate change a priority by starting community programs to harvest rainwater in droughts and plant trees to protect urban neighborhoods from the heat. “But addressing the crisis has been an unfunded mandate,” he said. “They need more investment.”

The majority of Democrats in Congress supported the budget bill that would finance a Green Bank to assist communities with installing solar panels and charging stations for electric vehicles. A Civilian Climate Corps of young Americans would also be created to build climate resilient infrastructure.

Clowes, who has a chronic illness that makes her especially vulnerable to heatstroke, said Sinema’s resistance to legislation that could help fund cooling centers and heat-defying infrastructure, and bring down the emissions fueling extreme heat in the region, has left her angry. Along with other members of the Sunrise Movement, Clowes camped outside Sinema’s office in Phoenix this week. “It’s really painful to watch my home become uninhabitable,” she said. “And see Senator Sinema turn her back.”