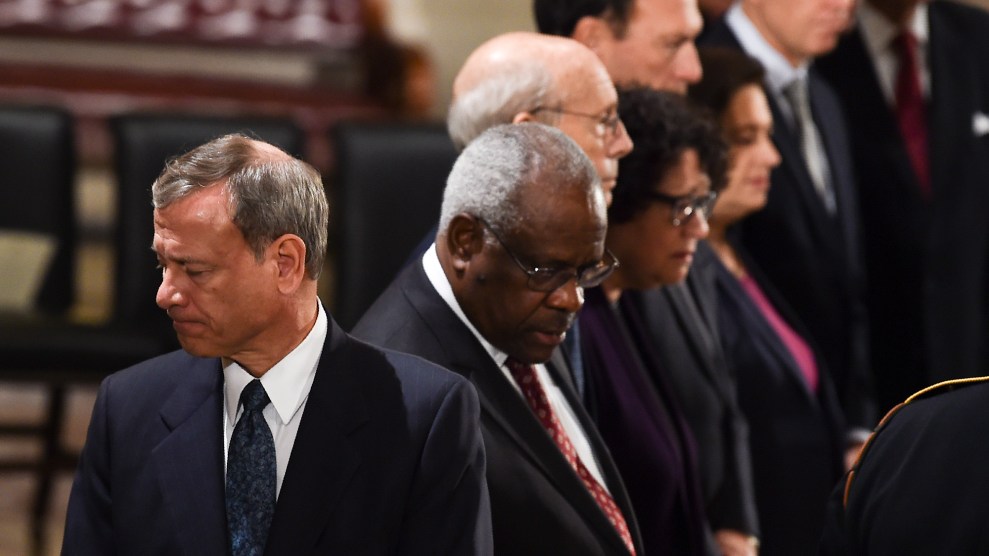 This story was originally published in Slate and is reproduced here as part of the Climate Desk collaboration.

This Wednesday was the Supreme Court issued a 5–4 shadow docket Place your order reviving a Trump-era ruling that radically limited the ability of states and tribes to restrict projects, like pipelines, that will damage the environment. With their decision, the majority upended decades of settled law recognizing states’ authority to protect their own waters without bothering to issue a single sentence of reasoning.

Just two days before, Justice Amy Coney Barrett declared once more that the Supreme Court isn’t political during a Speech at the Ronald Reagan Presidential Library Foundation. Americans concerned that a particular ruling was “purely results-driven,” she said, should “read the opinion.” A close reading, Barrett asserted, would help the public decide if the ruling is “designed to impose the policy preferences of the majority” or an honest effort to “determine what the Constitution and precedent requires.”

But those upset by Wednesday’s decision, which strayed so far from all known law that even Chief Justice John Roberts was driven to dissent, cannot “read the opinion”—because there is none. If that logic-free attack on the Clean Water Act is not a “purely results-driven” attempt to “impose the policy preferences of the majority,” it’s hard to see what is.

The court’s order on Wednesday in Louisiana v. American Rivers It is a violation of the Clean Waters Act, federalism and judicial restraint. It arises out of a dispute between Donald Trump’s Environmental Protection Agency and a coalition of states and tribes. The Clean Water Act, first passed in 1972, is a quintessential example of “cooperative federalism”: It compels the federal government to work with states and tribes before approving a project that could diminish water quality. 1994 was a significant year. ruling—one was accompanied by many pages of reasoning—the Supreme Court affirmed states’ and tribes’ authority to grant, modify, or deny certification of a potentially destructive energy project, like an oil pipeline or coal export facility.

Since nearly 50 years, the states and tribes have done exactly that, imposing additional requirements or vetoing these projects. They may place limitations on discharge into the water and “on the activity as a whole” to protect their environments from pollution. This power has allowed states and tribes to uphold their own water quality standards—even when the federal government is eager to approve an energy company’s latest dangerous venture. States often deny certification when the company refuses to disclose key information about the environmental impact on rivers, streams, or wetlands. Dissatisfied companies can contest a state or tribe’s decision in state or federal court, as well as administrative tribunals.

Predictably, energy companies dislike local authorities’ latitude over their projects, as do many red states. In 2020, Trump’s EPA responded to these objections by drastically cutting back state and tribes’ authority to modify or deny certifications. The agency’s unprecedented rule limited these governments’ review of potential pollution as well as their ability to incorporate new conditions into the permit. It also reduced the amount information that companies must provide, leaving states and tribes unaware about the harmful environmental effects of new projects. This rule caused significant disarray in several states, including Washington where the aquaculture industry is thriving. Nearly collapsed.

A coalition of 20 states, three tribals, and six conservation groups sued to block the rule. Eighteen red states and three industry trade organizations intervened in defense. In 2021, Joe Biden’s EPA announced that it would “reconsider and revise” the rule. A district court set aside the rule in October, finding evidence that it would impose “significant environmental harm.” (That decision is pending in the court of appeals.) After dragging its feet for nearly five months, the group of red states and trade groups belatedly asked SCOTUS to put the district court’s decision on hold, before the court of appeals could even issue a ruling.

Now the Supreme Court has agreed and revived the Trump rule—though we don’t know why, because the five-justice majority did not deign to explain its action. Justice Elena Kagan joined Justice Stephen Breyer and Sonia Sotomayor in a bewildered dissent. Kagan pointed out that, by law, the Supreme Court can issue this kind of stay “ in extraordinary circumstances,” when there is “an exceptional need for immediate relief,” including evidence of “irreparable harm.”

Here, the Trump rule’s defenders insisted that states were obstructing vital energy projects. But, Kagan wrote, they “have not identified a single project that a state has obstructed” under the district court’s decision or “cited a single project that the court’s ruling threatens.” Put simply, they failed to explain how returning to the pre-Trump regime—“which existed for 50 years”—would hurt them All.

How the White House will tackle climate change in disadvantaged neighborhoods

Climate Crisis for Wildflowers and Pollinators: A Fragile Future