The global fashion industry is taking steps to reduce the environmental impact at a time when the world is looking for more sustainable options.

Recent fashion shows at Cop26, the ongoing 2021 United Nations Climate Change Conference, were held by many British fashion houses such as Burberry, Stella McCartney, Mulberry and others.

According to an Independent report, on November 9, the UK government’s international marketing campaign GREAT hosted an event in partnership with the British Fashion Council, showcasing the manner in which brands have adapted to increase and promote sustainability, and reduce their burden towards the climate crisis.

Among the designers that participated in the ‘GREAT Fashion for Climate Action’ show were British brands like Burberry, Phoebe English, Stella McCartney, Priya Ahluwalia, Mother of Pearl and Mulberry, the outlet states. Britain’s Prince Charles speaks with designer Stella McCartney as he views a fashion installation by the designer, at the Kelvingrove Art Gallery and Museum, during the Cop26 summit being held at the Scottish Event Campus (SEC) in Glasgow, Scotland. (Owen Humphreys/Pool via AP

It is well-known that the fashion industry has a major role to play in climate change. According to the World Bank it is responsible in 10 percent of all global carbon emissions annually.

According to the report, brands were asked by the reporter to walk the runway and to explain how they are improving the carbon footprint. While Stella McCartney is committed to using no-animal products in clothing — the designer has made bags with mushroom leather, using only synthetic fur in her products — Priya Ahluwalia is “upcycling deadstock” and “vintage clothing”. 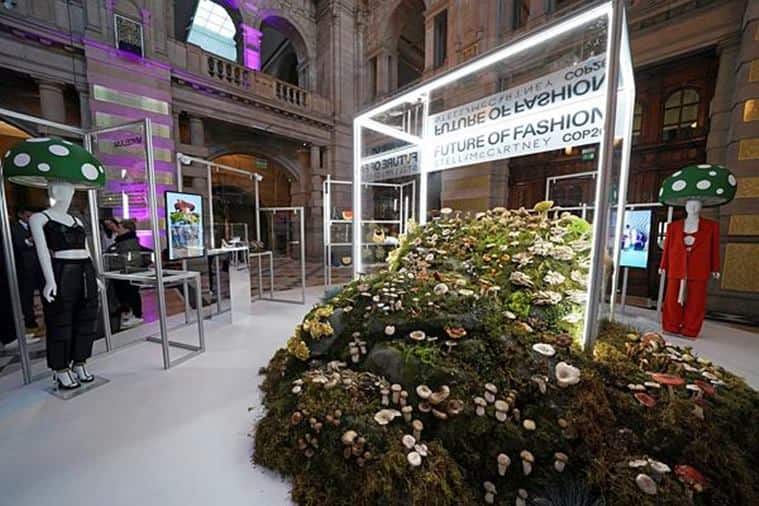 Stella McCartney’s fashion installation was displayed at the Kelvingrove Art Gallery and Museum during the Cop26 summit, which took place at the Scottish Event Campus, (SEC), in Glasgow, Scotland. (Owen Humphreys/Pool via AP

Sustainable womenswear brand Mother of Pearl that uses natural fibres like organic cotton and wool for clothing said “there needs to be an entire system reset” in terms of how clothes are designed, sold and bought. “We need to get back to valuing clothes as beautifully crafted pieces, not throw away objects,” Amy Powey, creative director of the company was quoted as saying.

“The system needs to slow down… We need to invest in brands with the right values and consider closed loop systems which encourage us to rent, repair, recycle and resell, replacing impulse purchases and fast fashion methodology.”

UK prime minister Boris Johnson also said on the occasion, “From infinitely recyclable clothing to carbon neutral companies, it’s brilliant to see these British fashion brands innovating and leading the industry towards a greener future. I know many more businesses will work hard to make fashion more sustainable in the years to come and I commend the industry’s resolve to play their part in this.”

Leading climate scientist Katharine Hayoe: ‘You have the ability to use your voice’ | Environment