Monday, April 25th 2022, 11:31 am – Public opinion analysis has found that half of Canadians now consider climate change a “very serious” threat, the highest amount since 2014.

According to polls, public worry about the climate crisis is growing as extreme weather events are more common in the country.

In a new ReportThis summarizes nationwide polling regarding climate change positions. It comes from as many 60 publicly-available survey analysts. They show that Canadians have a conflicted view of our climate future and are concerned about weather events.

The findings of an Abacus 2021 poll show that 78 per cent of Canadians were “very or extremely concerned about the impact of extreme weather conditions.”

Canadians have a better understanding of climate change by direct experience with extreme weather, such as drought or flood. According to the report, “Climate impacts are mounting in public perception and although climate change remains a psychologically ‘distant’ problem, the sense of proximity is becoming more immediate.” (Climate Access/ Climate Narratives Initiative)

The Environics 2021 poll also found 52 per cent of those Canadians surveyed felt severe weather events are drawing their attention to the climate crisis; 63 per cent felt wildfires are making them feel that “climate change is a more urgent issue” in the Abacus 2021 survey; and 49 per cent felt more concern about the consequences of a warming world in the present day than they did in the past because of “recent extreme weather events” in the Ipsos 2021 survey.

Relatedly, “within the past 7 months, 1.5 million Canadians have been convinced that climate change is having a direct impact on their health,” according to David Coletto of Abacus Data.

Similar findings were also reported in the United States. Gallup pollA third of Americans were personally affected by severe weather during the past two year period, according to research.

The US data showed a strong link between climate change beliefs and direct experience with extreme weather. Of those respondents who worried “a great deal” about climate change, about two thirds had been impacted personally by a severe weather event.

Only a third (33%) of those who have not been directly affected by extreme weather expressed this level of concern.

Comparably, two thirds of those who personally experienced extreme weather thought of climate change as a “serious threat” and that the government was not taking enough action on the crisis. 36% of those not affected by extreme weather events viewed the climate threat as serious and less than half criticized government inaction.

The numbers could signify that as climate change continues to manifest in devastating natural weather events — like the Recent wildfires in Lytton (B.C., Colorado, and California; intensifying hurricane and tornado seasons; and freak events like the Texas ice storm — public outcry might grow from those affected.

Some poll analysis suggests this may be happening already. Along with the Angus Reid 2021 poll that found that a full 50 per cent of Canadians considered climate change a “very serious” threat, there was a general shift in opinion toward a renewable future — 71 per cent believe an “energy transition” is “inevitable.”

Moreover, in the past two years alone, there was a nearly twenty point jump in those who believe that clean energy will be “very important” to the nation’s economy ten years from now, from 40 to 59 per cent of Canadians.

This, along with the sentiment shared by 77 per cent of Canadians that electric vehicles will be this main form of transport in ten years, and the majority belief (56 per cent) that the transition to green energy offers “more opportunity than risk,” heralds a shift in national support away from fossil fuel production, which has seen an erosion of eleven points (60-49 per cent) in just the last three years.

ABOVE HOPEFUL TRENDS – THERE ARE COMLICATIONS

Another look at how public sentiment is related to extreme weather events and climate revealed that there was disagreement among respondents about what such an event is.

The partisan divide is evident with only 48% of those on either side believing that extreme weather has become more severe over the past five years. This compares to 86% of those on their left.

The findings seem to suggest one’s partisan leanings about climate change may have more impact on how they perceive the severity of a weather event than that event changing their views on climate.

What’s more, the rise of inequality and recent challenges of inflation, Not surprisingly at the gas pumps, has shifted the attention of many Canadians away from climate and toward self-preservation — understandable when 57 per cent of families reported finding it difficult to feed their families in 2021 (up from 36 per cent in 2019).

This state of inequalities, with the brimming of partisanship, and distrust in institutions makes it more difficult to do the collective work necessary to combat climate change. The polls also show that the demand for climate action has fallen by 10 points (71-61%%) over the past five years.

This lack of momentum may be due to partisanship and distrust. However, it seems that members of all demographics feel a sense fatalism about the climate crisis. 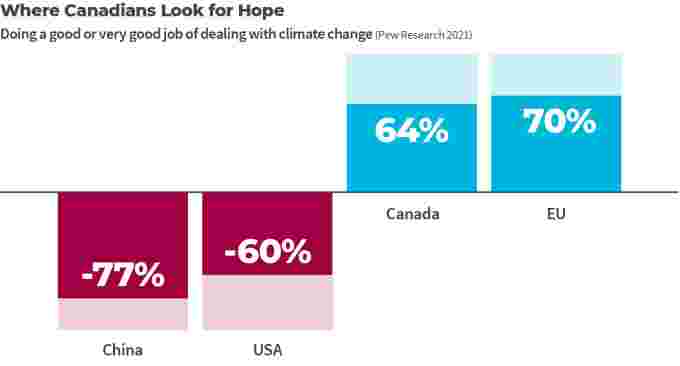 When looking for hope, pollsters point to Canada and the EU and away from China or the U.S. According to the report, “Canadians are most likely to see progress in Europe. Seventy per cent of Canadians say the European Union is doing a “good” or “very good” job dealing with climate change. (Pew Research Center 2020/ Climate Access/ Climate Narratives Initiative).

Noting the need to overcome this rising sense of fatalism, Sarah Roberton of analytics firm Environics said, “We need to build a sense of momentum.”

Chris Hatch (lead author of the report) says that part of the problem lies in our inability to draw a picture of possible solutions.

Environics 2021 polled 51 percent of respondents who believed there was still time for the worst effects of the climate crisis to be addressed, while half of those surveyed thought it was too late.

Researchers say that we can fight climate change at mealtime