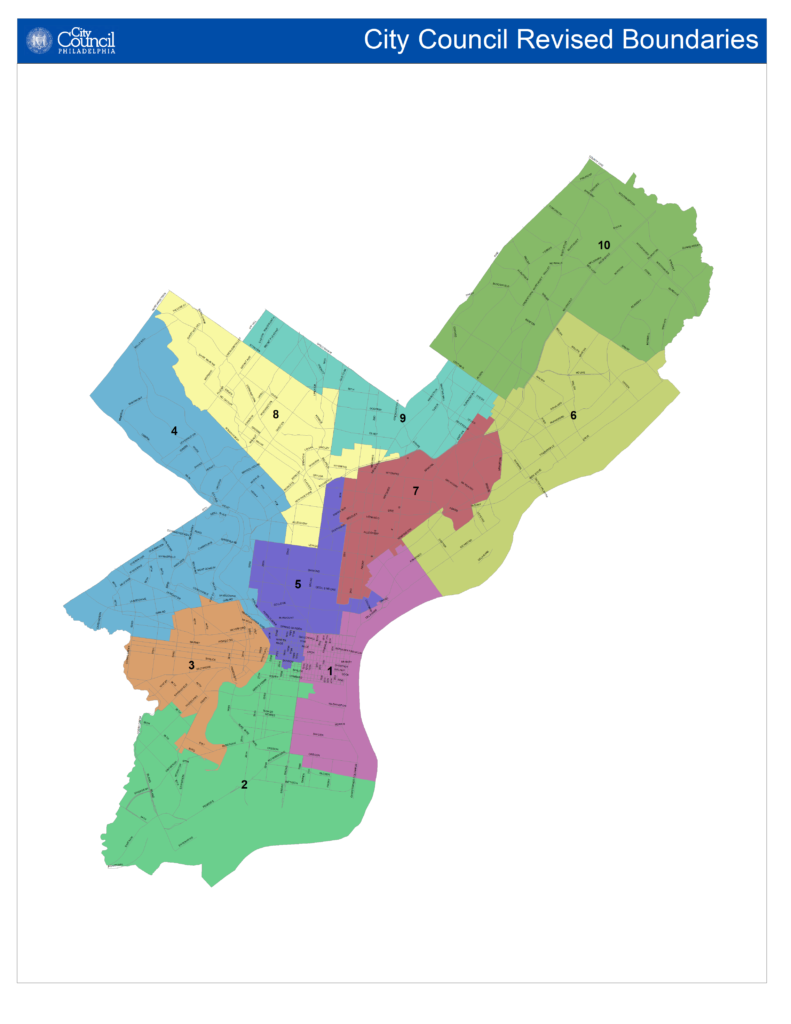 This week, the City Council approved legislation to revise the boundaries of its 10 districts. It also adhered to the requirement that Council undergo once-a-decade redistricting after the results of the U.S. Census.

The redistricting legislation Bill No. 220003After two hearings in which more than 30 members of the public gave evidence, the amended bill was unanimously approved on first reading by Council. The redistricting legislation is now scheduled for its second reading and final passage on February 10, just days before the deadline for Council approval.

The major changes to the districts were to address the growth in population in the eastern half of Philadelphia, as well as some population declines in the western part of Philadelphia. Since the city now has 1.6 million people, it was decided to draw boundaries so that the smallest district (4thDistrict), would have a population of 10 percent or less.

Individuals testifying at the public hearings expressed a variety of concerns, including wanting to see more public participation and public process around redistricting. They also wanted to see neighborhoods not being divided between different Council districts. Another issue was prison gerrymandering. This refers to how inmates were counted in order to redistrict. Another issue is whether the current city map of wards/divisions is outdated and should be revised.

Council President Darrell L. Clarke (5th Distric), who had the redistricting strategy drafted with inputs by Councilmembersand staff addressed each issue during the hearings. He responded to the request for more public participation in the process by telling the testifiers, “We do hear you.”

Regarding prisoner gerrymandering,Clarkesaidthat staff are in contact with vendors who have the capacity to add data involving prisoners in state correctional facilities back into appropriate Council districts, based on prisoners last known addresses. Clarke informed his Members and the public that Council has the authority and ability to review its boundaries and add theprisoner data by District, once it is ready. Clarke stated that between prisoners in state facilities and those in local jails, this number could be around 10,000.

On the issue surrounding ward and division boundaries,Clarkesaid it was clear that revisions were necessary, as many division lines havent been reviewed or revised in decades. Clarke indicated that staff and Council will work together with the City Commissioners office on this issue.

Clarke stated that we take our responsibility seriously to revise our borders in accordance with U.S. Census once a decade. Clarke agreed. 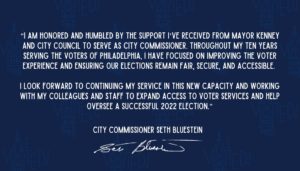 Bluesteins was opposed by some members of the Working Families Party led by Councilmember Kendra Brooks and a few progressive Democratic legislators. This was because he is a Republican at a time when many state laws are being promoted to limit voting rights inmultiple states.

But 15 members of Council, all but one of them Democrats, rejected that argument, noting that Bluestein is widely respected by voting rights experts as nonpartisan.Bluestein, along with Schmidt, Commissioner Chair Lisa Deeley, and others, worked around the clock in November 2020 to ensure thatseveral hundred thousand voters ballots were accurately counted which led to Philadelphia putting Pennsylvania in the win column for Joe Biden, in effect winning him the Presidency.

Bluestein was finally approved by the final vote. NominatedTo fill the seat held by Mayor Kenney, it was 15-1. In 2023, a full term of the commissioner will be up for election. 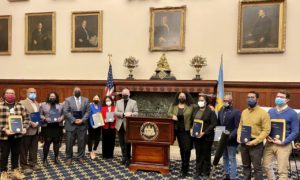 First, the mayor announced that the city would be the first to do soEnvironmental Justice Advisory Commission, which wasoriginally created in 2019 through the passageof legislation sponsored by Blondell Reynold Brown, then-Councilmember.

Your zip code in Philadelphia determines your life expectancy. Environmental injustice is an important part of community wellbeing and health. Councilmember Gilmore Richardson chairsCouncils Committees on the Environment. With this new Commission, and the creation of the Interagency Environmental Justice Working Group we are moving closer to creating a whole-government approach to addressing environmental justice. Most importantly, we are focusing the voices and experiences of people who have been affected by its effects. Mayor Kenney is a great leader on this issue. We also want to thank every member of the Commission who served the City of Philadelphia. 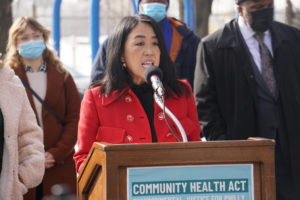 Second, Councilmember Gym announced this week the introduction of the Community Health ActEnvironmental justice legislation to better protect communities from the negative health effects of pollution. The bill, which was co-authored with environmental and legal advocates, aims to provide a better understanding of how pollution affects communities in light of existing pollution, demographics, health characteristics, and other factors. Instead of examining each proposal in isolation, this process will examine the project in context to prevent concentrated areas suffering from pollution.

Councilmember Gym said that Philadelphia must play an even greater role in protecting communities most at risk from pollution: low-income communities and immigrant communities, as well as communities of color and young people. We empower the city to use all of their authority to fully assess the impact of new projects on our communities, so that they don’t compound or exacerbate existing disparities.

The legislation provides that the Department of Health will conduct comprehensive environmental justice mapping. It will consider demographic, climate and health indicators. The city will identify the areas of environmental justice communities within the city that have an undued burden of pollution or adverse health impacts. These areas will be assessed for potential adverse effects on community health by any industrial projects that are built or located near them. This will enable the city to better understand the impact of the new project on the existing community landscape and allow the Department of Health the ability to possibly require additional mitigation steps before the project can be implemented.

To every partner, constituent, academic, advocate – we did this. When people say Philly is leading with, it’s because they believe so. #DrivingEquality – we did this.

I am grateful to be able share my story with you and look forward to the next chapter. Thank you to everyone who made it possible pic.twitter.com/aP6qARGW37 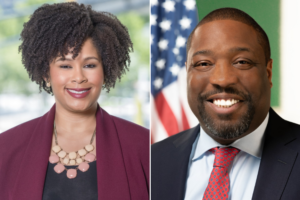 Johnson said that the creation of the Office of the Victim Advocate was long overdue in light of the unprecedented gun violence in Philadelphia. Advocates tell me that victim services are fragmented, which results in a lack of consistency and time for outreach and services. Adarais is the right person.

The Office of the Philadelphia Victim Advocate is a hub for victims of crime and co-victims. This includes family, neighbors, colleagues, and other people indirectly affected by crime. The office’s functions include coordination, planning, advocacy, and policy advocacy.

Hearings and roundtable discussions organized by Victims and covictims subcommittee of Councils Special Committee on Gun Violence Prevention led to the creation of the Office of the Philadelphia Victim Advocate. Councilmember Johnson introduced legislation to amend the Philadelphia Home Rule Charter in order to create an independent, permanent Office of the Victim Advocate. The measure was approved by voters in November 2020.

Combs was the Supervisor of Philadelphia District Attorneys Juvenile Division, a position she held from 2020 to January 2019. She has dealt with many cases, ranging from drug-related offenses to sexual assaults.

Councilmember KenyattaJohn (2ndDistrict), long struggle to have the city have a Victim Advocate full-time has finally led to Adara L. Combs being named the firstPhiladelphia Victim Advocate. MayorKenneyhastransmitted his nomination ofCombsforCouncilconfirmation.

Johnson said that the creation of the Office of the Victim Advocate was long overdue in light of the unprecedented gun violence in Philadelphia. Advocates have said that victim services are scattered, which leads to inconsistent outreach and services.

The Office of the Philadelphia Victim Advocate is a hub for victims of crime and co-victims. This includes family, neighbors, colleagues, and other people indirectly affected by crime. The office’s functions include coordination, planning, advocacy, and policy advocacy.

Hearings and roundtable discussions organized by Victims and covictims subcommittee of Councils Special Committee on Gun Violence Prevention led to the creation of the Office of the Philadelphia Victim Advocate. Councilmember Johnson introduced legislation to amend the Philadelphia Home Rule Charter in order to create an independent, permanent Office of the Victim Advocate. Voters approved the measure on November 2020.

Combswas the Supervisor for the Juvenile Division of the Philadelphia District Attorneys Office, a role she held from 2020 through January of this year. She has dealt with numerous cases, including those involving narcotics and gun-related crimes to sexual assaults.

OTHER SOUNDS AND SIGHTS FROM THE COUNCIL WEEK 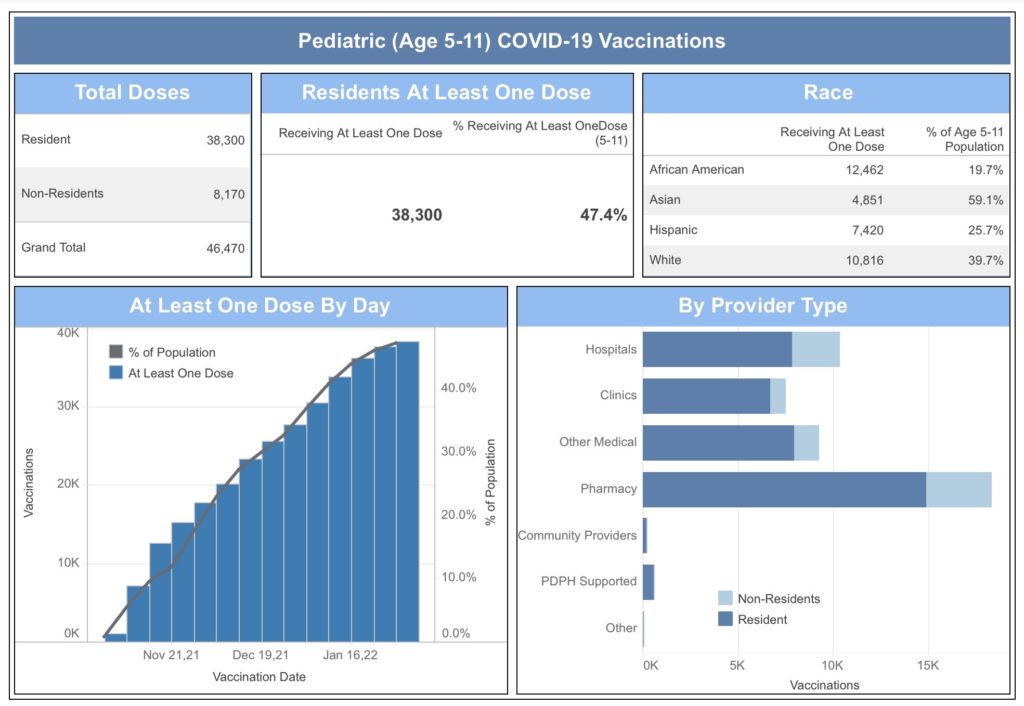 The next Stated Meeting will be held on Thursday, February 10, 2022 at 10:00 a.m. Due to the ongoing pandemic it will be televised. 64, Fios Channel 40 and stream at www.PHLCouncil.com/watch.

Repsol: Peru oil spillage will be cleaned up by March – Environment