The ice chunk, which weighed in at over two tonnes, was created to represent melting icebergs due global warming. Three women artists danced over the chunk while it remained suspended from its harness. 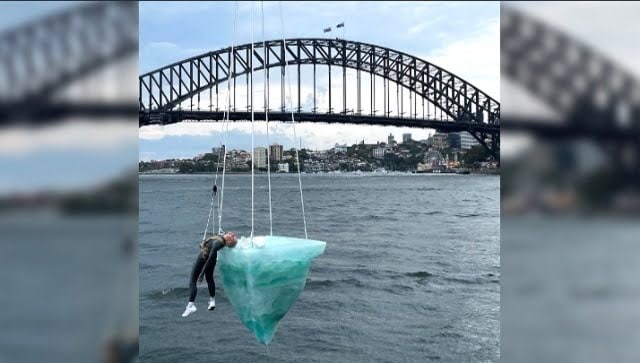 Legs on The Wall performed Thaw at Sydney Festival. Twitter/@sydney_festival

An innovative way was chosen by artists from a physical theatre company to highlight the impacts of climate change. During the ongoing Sydney Festival 2022, the artists from the Legs On The Wall have performed an aerial dance on a large chunk of ice that was hung over the Sydney Harbour.

The ice chunk, which weighed in at over 2 tonnes, was created to symbolize the melting of icebergs as a result of global warming. As the ice chunk was being suspended from the harness, three women artists danced over it in turns.

Thaw, a theatrical performance on a melting block of ice, represented the impending climate disaster and worry that now exists in the world.

Joshua Thomson, Legs On The Wall’s artistic director, said to reporters that art is a great way to connect people with real problems.

Here’s a video of the performance

The dance of the artists has been shared by millions and it has been hailed as a touching performance. The performance was praised by most people, while some people thought it was a hollow gesture.

This is it. @LegsOnTheWall for such a compelling& creative way to make the #climatecrisisVisually real. You can live now at THAW cam: https://t.co/AmfPKezF9U #auspol #art #extremeheat pic.twitter.com/vFWLtOhVHS

‘Fabulous work,’ wrote a Twitter user while sharing an image of the dance performance.

A Twitter user criticized Legs On The Wall for using freshwater to make the large ice block.

Another wrote the a waste of taxpayers’ funds

What do you think about the aerial dancing performance?

Art Institutions aren’t doing enough to lead on Climate Change. Here are some ways the industry can rethink its responsibility

Another record-breaking ocean warming due to climate change