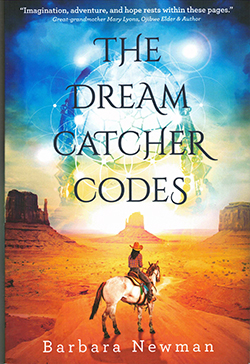 SAN DIEGO This Young Adult novel, which is set in San Diego, features four pre-teenage American girls who represent the four cardinal directions. They work together to save the planet from environmental disaster. Maia, who represents the North, is a Lakota woman from South Dakota. The others are a Black Jewish girl from New York (Sara East), a Chicana from New Mexico (Ava South), and a Chinese girl adopted by a Caucasian couple in California (Yue West).

Each girl is magically gifted with the ability harness one of the fundamental elements. Maia can resist evil winds by rooting herself in the Earth. Sara can expell a good wind from her expanding lungs. Avas specialty is fire and Yues is for water. Maias mother Sophia gives them four flying horses that can transport them around. The walls are illuminated by light shining through intricate Native American dream catchers.

The magical enemies that the girls face include malevolent dark cloud and other evil forces that try to stop them from finding a magical piece of crystal that Sophia has stolen from her by a large raven. The raven is also a dangerous enemy for girls. The supernatural tricksters can create optical illusions to harm children. They can reverse some of the environmental damage done to the planet if they can find the missing crystal from a horseshoe-shaped glass. All the damage can be reversed only if profligate humans change their ways.

The fact that these girls are from four different ethnicities represents one of the key messages of the book. We must all work together to stop environmental damage. If left unmolested the earth can begin its healing process.

Barbara Newman’s interethnic social commentary is also facilitated by the differences in ethnicities. Maia, for instance, tells Sara her people and other Native Americans fight to protect our sacred lands. They also struggle to keep our customs alive. Some people struggle just to have enough food and decent healthcare. Although the indigenous people of this country are speaking up, little has been done to change things. Im so angry.

Maia hears Sara say that her mothers’ ancestors came from Eastern Europe. Maia tells Maia that they were born in a tiny village in Poland. They lived on potatoes, beets, and love. They tried to escape from the Holocaust. Some of them fled but survived. Others died in the camps.

Maia concludes that the two girls have cultures that were destroyed by outside forces. This bond is formed between the two girls. Maia walks at another point with her eyes closed. Maia then sees a symbol, or a letter, that looked to Maia almost like a house which has become the number 18. Sara explains that 18 is the Hebrew equivalent of Chai, which means life. It looks something like the house Maia described.

The YA novel focuses attention on the beauty and healing powers of Nature. It teaches the girls (and the readers) to spend time studying and appreciating their surroundings. As the girls are, all are interrelated parts and one Mother Earth.

The quest for the crystal takes the four girls along with their flying horses across the United States. There they learn valuable lessons about the world. This section is, in the opinion of one reviewer, a little too cluttered with facts that aren’t directly relevant to the ultimate quest.

One oddity of this book is the fact that even though they live in harmony with nature during their journey, the girls crave other foods. One girl can’t wait to get her hands on a cheeseburger. An authors oversight? Or maybe it is an indication that, although the girls are environmental champions and their education is still incomplete.

*
Donald H. Harrison is the editor of San Diego Jewish World. He may be contacted via donald.harrison@sdjewishworld.com