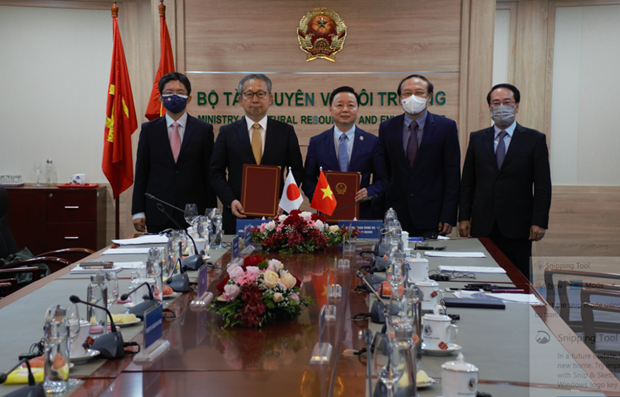 The signing ceremony of the MoU for low-income countriesCarbonGrowth between Vietnam and Japan on Oct 14. (Photo courtesy of Vietnam’s Ministry of Natural Resources and Environment.

Hanoi (VNA)On December 16, the second Vietnam-Japan Environment Week began. It was designed to provide opportunities for enterprises from Japan and Vietnam to exchange information about the environment and how they can respond to climate change.

Vo Tuan Nahan, Deputy Minister for Natural Resources and Environment, spoke at the opening ceremonies of the event. He said that the 2021Vietnam/Japan was the future. Environment WeekIt is part the joint cooperation plan on climate changes response towards the target carbon neutrality by 2020 which was signed on November 24 by Tran Hong Ha, Vietnamese Minister for Natural Resources and Environment, and Yamaguchi Tsuyoshi Tsuyoshi (Japan Minister of Environment) during the official visit of Pham Minh Chinh to Japan.

This was a significant event that marked a substantial development in the cooperation relations between the two countries as well as the two ministries in environmental protection. Climate changeHe responded, saying that it opens up cooperation opportunities among agencies and organisations, particularly between businesses from the two countries.

Ooka Toshitaka (Japan’s Deputy Minister of Environment) stated that Japan will help Vietnam achieve its goal of carbon neutrality in 2050. Japan will devise long-term strategies for the implementation of future projects.

The two sides were able to witness a breaking ground ceremony that marked the start of construction of a waste incineration facility project in Bac Ninh province.

Yamada Takio, Japan’s Ambassador to Vietnam, stated that the project is a manifestation of Japan-Vietnam friendliness and that it has been a model for other areas to implement energy recovery from waste combustion projects. He also stated that JapanWe hoped to continue to support other projects related to carbon mitigation in the near future.

Letters: Why isn’t there a more compassionate environment? And the right to choose what happens at the end of your life?

Environment Canada predicts gusts of up to 90 km/h today