The transition to net-zero carbon emissions for economies isn’t one that is going to happen in a bubble, but it will instead be a rapidly accelerating event that will send shocks throughout systems on all levels. According to a recent study, the acceleration can be attributed to the recent COP26 summit, secondary effects of decarbonization, as well as the positive feedback loops that climate change transition has created. paperState Street Global Advisors.

Investors who believe that slow changes will be enough to address climate change could be in for a shock and a big loss within their portfolios, according to Carlo M. Funk of State Street Global Advisors. The transition of countries to low emissions will have long-term consequences and will have a wide range of impacts on regulations and economies.

Despite not delivering any single, world-changing solution at the COP26 climate summit, more countries have pledged to cutbacks and meet net-zero date targets. A global carbon market was created at the summit. It would include two types of allowances: one for public and private industries and one that is only for countries to trade with one another in the global effort towards net-zero. It’s a step towards greater Paris Agreement enforcement and commitment, and a move that accelerates the transition timeline.

Another reason why the transition could accelerate is because of the secondary benefits that countries, and companies, can derive from reducing carbon emissions. The world’s leaders in renewable energy transition would be a huge advantage to countries, especially since developed countries are the net exporters of energy from those that rely on fossil fuels for their primary energy source. In a new global economy, trade balances may shift away from fossil fuels. 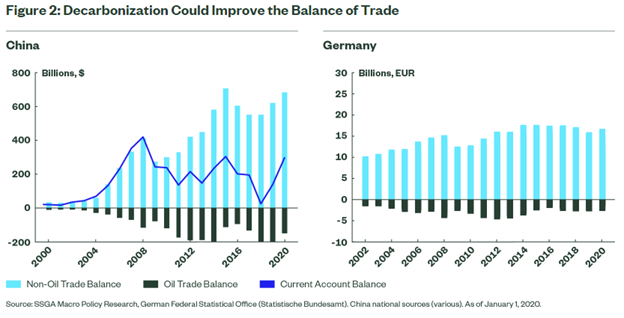 “For example, geopolitical superpowers (the US, China, and Europe) are incentivized to stay on top of the race to become a climate leader because the transformation to a low-carbon economy will come with enormous opportunities (similar to other disruptive shifts, like digitalization),” writes Funk.

Feedback Loops will intensify the Transition

The positive feedback loops that could be created by countries moving away from fossil fuels are another reason for a faster transition. These feedback loops include the volume cost loop, in which fossil fuel volumes are decreased as they are used less. This drives up the cost and further decreases demand.

The Carolinas had a warmer winter than normal due to climate change.

Another feedback loop is called the expectations feedback loop. This occurs when renewable energy demand rises and fossil fuel industries start to look less credible due to shifting investor and policymaker perceptions.

Another important feedback loop is the financial one. Increased renewable energy growth results in more inflows from investors which in turn lowers the cost capital for renewable energy businesses. This allows green energy companies the opportunity to grow and expand, while also putting pressure upon fossil fuel companies.

Visit the for more information and strategy ESG Channel.

‘We have to use a boat to commute’: coastal Ghana hit by climate crisis | Ghana