B.C. is likely to see heavy rains. This week brings with it concerns about flooding and high stream levels.

The hardest hit areas are expected to be east, west, and inland Vancouver Island, Howe Sound and Metro Vancouver, as well as the Fraser Valley, which includes Abbotsford.

Environment Canada says the strong southwest flow will develop on Tuesday and will result in another “atmospheric river” impacting the south coast.

Environment Canada stated that snowmelt at low elevations is a concern in this next system. This could cause more runoff and additional flooding.

According to the River Forecast Centre however, it isn’t expected to be as hot as November’s atmospheric river events. 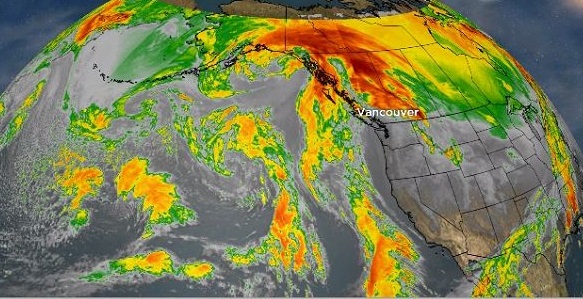 The organization has issued a High-Streamflow Advisory for Vancouver Island.

“The combination of low elevation snowpack, warming temperatures and heavy rainfall will result in rapid rises for creeks and rivers, especially at low and midelevation watersheds on the island,” its statement reads. “It could result in minor to significant flooding. Rivers are expected to begin increasing on Tuesday and likely peak Wednesday or Thursday.”

A High Streamflow advisory has been issued for Howe Sound and Sunshine Coast, the Sea-to-Sky area, the North Shore mountains and Metro Vancouver. It also covers theFraser Valley, including the Chilliwack River, and its tributaries.

Last year was the hottest ocean temperature in history | Oceans