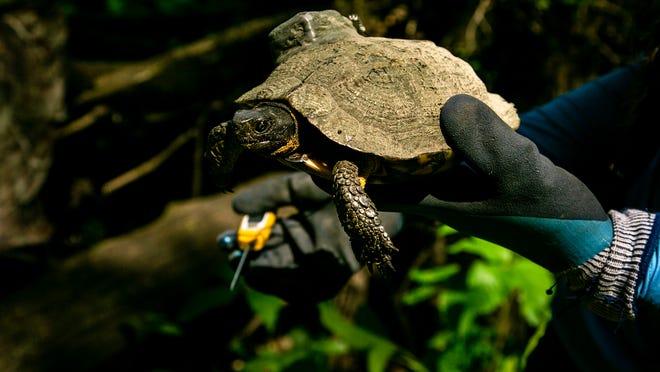 A group of fifth-graders stood at the edge of Cangleska Wakan’s pond in Solon, peering at the various critters and shells they had collected from the water.

Moments earlier, another student was successful when he dropped his net into the water.

He shouted, “I got the tadpole,” and carried his find back into his bucket.

The students were from Alexander Elementary, Iowa City. They were given the task of exploring the wetlands during a field trip in May.

Before the activity, a Johnson County Conservation teacher asked students what they might find within the wetland.

After a couple of falls in the shallow water and one bag of 23 tadpoles, they sat down on grass and pulled out their notebooks.

They were asked which animal or plant they would like to draw or write about.

One student wrote that a caterpillar was an animal in water.

They were so beautiful that another student wrote about them.

The field trip was the culminationof two in-class guest speakers who discussed the environment. It was part of the Iowa Youth Writing Projects’ new program, Writing on the Environment. This program invited students to explore and write about the subject.

Students and their families are invited to Cangleska Wakan on Saturday for a dinner. Some students will even read their workthere. It will be displayed on temporary yard signs at the park so that community members can see it.

An anthology of student work will also be published. This anthology is intended to be distributed to students, schools, and community partners.

Michelle Wiegand (ex-Associate Director of IYWP) stated that the project was a way to celebrate youth voices, their power and ability, and to make a difference in our climate crisis and the natural world.

More:“We are making them extinct”: Meet the professor who works to save rare Iowa turtle species

Students can write about their experiences to advocate for themselves as well as for the community.

IWYPs Writing on the Environment program was a good fit to fifth-grade students.

Snyder stated that if a school can take what’s being taught in a classroom and connect it to an outside space, that makes it more valuable and empowers students.

Part of the science instruction during the year and during the Writing on the Environment program was about living systems, interfacing with ecosystems, as well as the relationships between animals and plants in the environment.

The program is inherently interdisciplinable, connecting science and literature to, as Snyder pointed to Wiegand early in conversations social studies.

Writing encourages students to ask their own questions.

Snyder explained that they can draw and write about their explorations. Their teachers can help them get started or help them to articulate their ideas.

He said that writing can also be affirming because students are sharing their own experiences.

Snyder stated that Writing on the Environment teaches students how anyone can be a scientist or writer.

Wiegand stated that the program is intended to show how writers’ work has impacted the natural world as well as the environmental movement.

The program encourages children to take care of the environment and they need to be outside. Cangleska Wakan offers children the opportunity to have fun in nature.

Wiegand stated that this encourages curiosity and allows for the possibility to learn more.

More:Iowa City met its 2030 carbon emission goals in a timely manner. What’s next in the city’s climate strategy?

“The children were very open to learning about the environment”: Activities in the classroom

Snyder stated that the three schools were chosen for the program partly because of the enthusiasm shown by their principals.

IYWP was also interested in working with schools with a higher student population and more students of color.

“When we think about climate change and environmental challenges, unfortunately, the communities of color are more affected,” she stated. “If we are to make a change, to make inroads in addressing these issues, we must ensure that these communities are involved in the search for solutions.”

Each school had two classroom tours before the field trip. These included Cornelia Mutel and others. a retired senior science writer and historian for the University of Iowa IIHR Hydroscience & Engineering.

Mutel has been a resident of Iowa City for many decades.

Her visit to Hills and Mark Twain students left her impressed by their teachers, both in how they taught their material and how they managed their classrooms and students.

Mutel observed a teacher speak Spanish to one student to ensure he understood.

She stated that the children were very open to learning about the environment.

The author shared her passion for natural history and brought items from her collection to students. They were respectful of the material and focused.

I like to say that if we don’t have a healthy, nature-rich world, all the other problems will be irrelevant. Mutel stated that climate change is fundamental to all of our activities.

Writing on the Environment taught students the basics of eco-poetry, nature journaling, and nonfiction writing.

Melanie Hester has been teaching fifth grade at Alexander Elementary for seven year.

Wiegand shared a poem by Mary Oliver during one of the in-class activities. Her work explores the natural world.

Students were asked for their favorite line and to incorporate it into a poem. Hester explained that students shared their poems and chose a favorite line from each of their works to create a class poem.

Hester shared the class poem to the Press-Citizen

The TJX Company, Inc. Announces New Global Environmental Goals, including a Plan to Reach Net Zero Emissions in Its Own Operations by 2040

You make me want dance

This is why everyone has fun

Balloons in the air

It is, however, thee

Friend, you are a true mate

I wish it never ends

What a beautiful day!

It is time to get up

Keep my positive feelings in your heart

To see the world beyond us and above us

Hester shared that she witnessed one of her students lead the group along the trail to its meeting point, despite not speaking for most of the year.

Hester stated that I wouldn’t have noticed that about him if it wasn’t for the trip. This was one of the highlights. He ended up standing beside our guide for the entire time and just became friends with her, even though he rarely speaks.

We need to listen to them more: What’s next in Writing on the Environment?

Wiegand explained that the Writing on the Environment program was an opportunity to engage youth voices on the greatest challenge their generation will face, the Climate Crisis.

Its purpose is to show our community’s youth that they have stories to share, she said. They have very unique perspectives on things such as the natural world, and their experiences in those areas. We need to listen to them more about all matters, but especially those relating to our environment.

The contest is part of the program.

Hester suggested that students could either write a haiku or do nature journaling. They could also write a short essay on why parks like Cangleska wakan are good for the planet and why we should protect them.

The Writing on the Environment program will require reflection and insight by teachers and guests speakers after it is completed.

Hester stated that she would like to see the Writing on the Environment program run for a longer time and have more variety among guest speakers, so students can see themselves in these learning opportunities.

Snyder stated that he would love to see the partnership between the schools, IYWP, and other organizations continue.

He said that although it might look different, that would indicate that we are growing in a productive manner.

Paris Barraza is a journalist covering entertainment, lifestyle, and arts at the Iowa City Press Citizen. Reach her at PBarraza@press-citizen.com or (319) 519-9731. Follow her @ParisBarraza