Welcome to Tuesdays Overnight Energy & Environment, your source for the latest news focused on energy, the environment and beyond. Subscribe here:thehill.com/newsletter-signup.

Today we are looking at a request for a government watchdog that investigates power plants they claim disproportionately pollute low income neighborhoods. A new office within Energy Department was also mentioned. 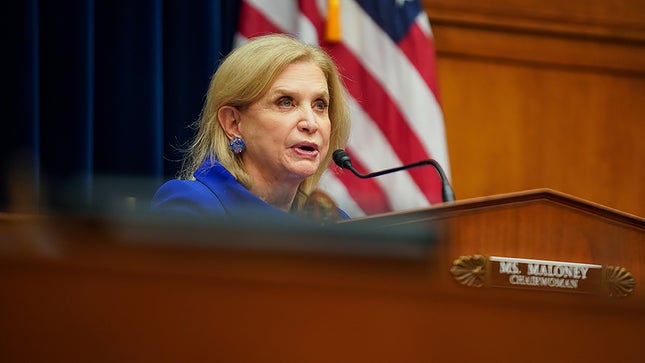 Three House Democrats from New York on Tuesday called on a federal watchdog to investigate pollution generated by peaker power plants, or those that only generate electricity during periods of high demand.

The background: The lawmakers noted that the plants are both less energy-efficient than standard power plants and are frequently located in lower-income or predominantly minority neighborhoods.
The lawmakers wrote that peaker plants are a high-impact option to reduce climate risk and address a serious environmental justice problem. They can emit as much as 20 times the carbon and as much as 20 times the nitrous dioxides of a typical power plant, but they operate at a lower efficiency. GAOs are requested to provide data on key data to assess damage and uncover health burdens, calculate economic cost, and find alternative solutions to peaker power plant use.

Close to home: There are 89 peaker plants in New York City alone, including 28 in or near Maloneys district and 16 in Ocasio-Cortezs district. Due to the high incidence of asthma, Asthma Alley is a district in western Queens.

Jerrold (Jerry) Lewis NadlerThe truth of Jan. 6 is coming to light accountability will fall to the courts House passes bill to expedite financial disclosures from judges Unrequited rage: The demand for mob justice in the Rittenhouse trial MORE and Nydia Velazquez

Kirsten GillibrandPhotos of the Week: Tornado aftermath, Medal of Honor and soaring superheroes Overnight Defense & National Security Senate passes sweeping defense bill Senate approves sweeping defense bill MORE in introducing bicameral legislation to replace and upgrade the plants. The bill was referred by the Senate Finance Committee in May, but no action has been taken on it since.

You can read more about the letter by clicking here.

The law, signed by Biden on November 11, provides $20 billion for the establishment and funding of the office. This office will be used to fund demonstration projects in technologies like carbon capture or renewable hydrogen. The $62 billion pot is used to accelerate renewable energy development in the department.

Thanks to the investments Congress made in the Bipartisan Infrastructure Law, the Office of Clean Energy Demonstrations will move clean energy technologies out of the lab and into local and regional economies across the country, proving the value of technologies that can deliver for communities, businesses, and markets, Energy Secretary Jennifer Granholm

What’s the breakdown? The Energy Department released a fact sheet in November that stated that the renewable funds included in the infrastructure law $8 billion for renewable hydrogen, $10 million for carbon capture and direct aerial capture, $2.5Billion for nuclear technology, and $1 billion to support demonstration projects in rural areas.

Learn more about the announcement.

A 6.2 magnitude earthquake rattled northern California on Monday,according to the U.S. Geological Survey.

The quake, which occurred off of Cape Mendocino near Humboldt County, could be felt in nearly 270 miles away in San Francisco as well as in Chico,according to CNN.

CNN reported that the quake shook a county of 4,000-square miles with a population of only 135,000 people.

CNN spoke with Humboldt County Sheriff William Honsal who said that the county hadn’t experienced “a shake like this” since 2010.

The sheriff said that emergency responders were looking at the damage and that no catastrophic damages had been reported. He was also not aware of any injuries.

The Humboldt County Sheriff’s Officeannounced via Twitter that “numerous smaller aftershocks” had been recorded, but there was not a threat of tsunami at the time.

You can read more about it here.

And finally, something offbeat and off-beat: Chewed out.

This is it for today. Thanks for reading. Check out The Hillsenergy & environment page for the latest news and coverage. We hope to see you again tomorrow.

Another Nail in Coal’s Coffin: Environment