Marylanders are well aware that climate change is threatening its future, its economy, and its infrastructure. These changes are caused by pollutants in the atmosphere that result from the burning fossil fuels and in large part the transportation sector.

According to the Maryland Department of the EnvironmentTransportation is the biggest source of state-wide emissions. Marylanders are increasingly at risk from carbon dioxide pollution. Maryland must reduce harmful air pollutants like GHG emissions to protect public health, economic well being, and natural treasures.

It is clear that a combination of regulations, carbon pollution pricing and other complementary policies are needed to meet the state’s emissions reduction goals. The Climate Crisis and Environmental Justice Act, (CCEJ), will be introduced at the General Assembly’s next session. It incentivizes reduction of planet-warming pollutants from burning fossil fuels. Maryland would then be on a practical, common-sense path to a vibrant, sustainable economy.

The bill will generate billions of dollars for investment in clean energy infrastructure, while simultaneously protecting Maryland’s most vulnerable populations, low- and moderate-income households, and energy intensive, trade-exposed small businesses from financial harm.

The CCEJ, a revised version the Climate Crisis and Education Act was introduced in the 2021 legislative sessions by Del. David Fraser-Hidalgo & Sen. Benjamin Kramer. The Education Fund and the high-emission vehicle fee have been removed from the bill. The HEV fee is now a companion bill to the CCEJ and has been pre-filed as the New Motor Vehicles – Pollution Fee.

Burning fossil fuels like coal and natural gas is the source of pollution that’s inflicting harm on our communities and our climate, and they must be eliminated. The bill’s first goal is to establish the following new statewide emission reduction goals that are consistent with current science.

These goals complement existing programs such as the Regional Greenhouse Gas Initiative.

CCEJ will charge a fee for all imported fossil fuels. Fossil fuel businesses will be subject to a $15 per metric tons of carbon pollution from non-transportation fossil fuels being burned in Maryland. The price will increase $5 per year and reach $60 per metric tons. Transportation fuels — mainly gasoline and diesel — will be charged a fee that will start at $10 per ton and rise $3 annually and cap at $37.

The fee for fossil fuels must be collected at the point of sale and by any entity transporting the fuel into the state. The collected fee cannot be passed on as a cost to the end user or utility customer of fossil fuels.

The CCEJ also includes policies that will mitigate inequities that may arise from the implementation the pollution fee. It will generate billions of dollars for investment in clean energy infrastructure and protect Maryland’s most vulnerable communities. Two funds will be created from the revenue generated by the pollution fees as shown in the revenue flow graph below.

1) The Household and Employer Benefit Fund will distribute 50% of the total revenue to low and moderate-income households and to energy-intensive, trade exposed (EITE) businesses to protect them against financial harm. The household benefits account will receive 80 percent, while the employer benefit account will receive 20%.

2) The Climate Crisis Infrastructure Fund will invest 50% of the revenue in initiatives that improve Maryland’s health and welfare. It will also invest directly in projects located in communities most affected by environmental injustice. 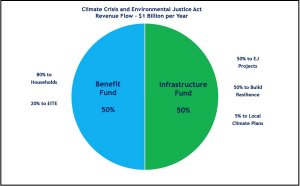 CCEJ orders the Department of the Environment establish a Climate Crisis Council in order to develop a plan for achieving emission reduction targets. It also establishes the Fee and Investment Initiative, which will fund actions to reduce emissions, increase resilience to climate impacts, and ensure a fair transition for workers and communities dependent on fossil fuels.

The urgent need for now

To ensure the survival of our planet for future generations, we must act now.

Dr. Martin Luther King Jr. made this profound statement when he delivered his famous “I Have a Dream” speech Aug. 28, 1963, at the Lincoln Memorial on the Washington, D.C., National Mall: “We are now faced with the fact that tomorrow is today. We are faced with the urgent and fierce nature of now. In this unfolding conundrum of life and history, there ‘is’ such a thing as being too late. It is not the time to be complacent or apathetic. This is a time for vigorous and positive action.”

Climate change campaigners give a petition to Harborough MP