Marine scientists discovered a coral reef in pristine condition, which is a rare find. It is believed to be one the largest coral reefs at such depths. It seems unaffected by human activities or climate change. AP

Marine scientists discovered a coral reef in pristine condition off Tahiti’s coast, which is a rare find.

The rose-shaped corals were discovered deep under the water and are not being affected by humans or climate change. 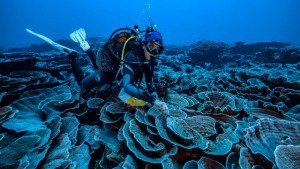 Scientists discovered a stretch of rare corals that resemble roses off the coast Tahiti in the South Pacific. AP

Let’s briefly discuss coral reefs, why they are important for the environment and why they are so unique in nature.

What are coral reefs?

Coral reefs are sometimes called the “rainforests of the sea”, and they form one of the most diverse ecosystems on the planet. Coral reefs are usually formed by colonies made up of stony corals. These marine invertebrates secrete calcium carbonate to form a hard shell.

Although they occupy less than 0.1% of the ocean’s surface, it is believed that they are home to at least 25% of all marine species, including fish, mollusks and crustaceans.

Although coral reefs are more common at shallow depths within tropical waters, they can also be found deep in colder waters.

Are they in danger

Yes. According to a September 2021 report The Guardian Since 1950, coral reefs have seen a 50% decline in their numbers.

Different studies have shown that they are at risk from excessive nutrients of nitrogen or phosphorus, rising temperature, overfishing, and even sunblock use. 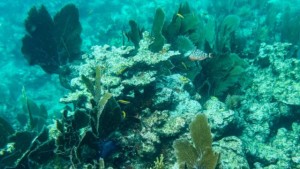 Dead corals are found on the Straits of Florida near Key Largo in Florida on September 23, 2021. AFP

According to the Global Coral Reef Monitoring Network’s Status of Coral Reefs of the World 2020 report, coral reefs are still most at risk from mass coral bleaching events caused by rising temperatures.

Why discovery is so important

UNESCO noted that reefs thrive in warm, shallow and clear water. However, it is not common for coral to be found in cooler waters, ranging from 30 to 65 metres (98- 213 feet) in depth.

This discovery could also indicate that there are more coral reefs beneath the ocean floor that are protected from the effects of warming waters.

“The discovery that this reef is in such pristine conditions is good news and could inspire future conservation,” Laetitia Hiedouin, a French marine biologist at the French research agency (CNRS), stated. Agence French-Presse (AFP).

“We believe that deeper reefs are better protected against global warming.”

The reef measures approximately three kilometres (two mile) in length and 65 metres wide at certain points. UNESCO called it “one of the largest healthy coral reefs ever recorded”. 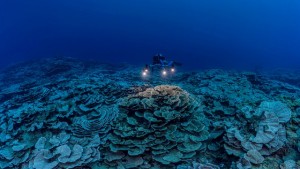 It is believed to be the world’s largest coral reef and has remained untouched by human activities or climate change. AP

According to BBCThe reef was discovered in November by divers on a dive expedition to the depths known as the “twilight zone” of the ocean. This was part of the Seabed2030 Project, a global seabed-mapping mission.

Professor Murray Roberts, a prominent marine scientist from the University of Edinburgh, told BBC The discovery suggests that corals may be able to find deeper reef systems in the future.

“Small water warms faster than deep waters so corals may find these deeper reefs systems as refuges in the future.” Roberts stated that we need to go out and map these special places, understand the ecological role, and protect them for the future.

With inputs from agencies